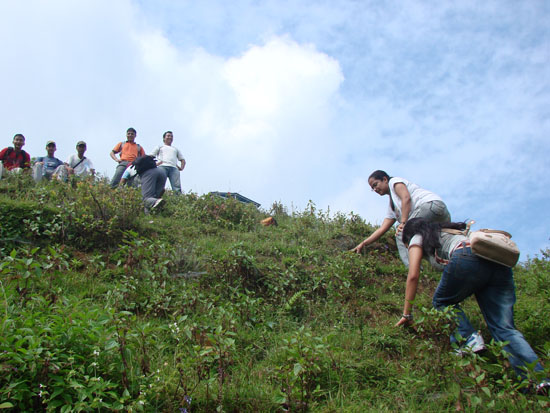 There was one big event being aired on TV for the most of people of this region. Most of hiking participants were attached to the show on last Sunday and waiting eagerly for the schedule.

It was Indian Idol, a reproduction of An American Idol, a Nepalese origin but Indian citizen, a police officer of Indian Police Force, Prashant Tamang was one of the finalist of the show and who was popular and lucky one for winning massive Nepalese’ heart. Moreover some participants had to go in dance practice in late afternoon on the day also.

For this reason we were excited and thinking of making short and sweet journey to save energy for tossing and turning until midnight. With mixed feeling of action and passion we commenced our hike from Taudah and through green paddy field of the Bosan.

15 minutes of pace inside green, but matured paddy field, we had to go along a small canal and the anxious walk did not last for long, as we came about to meet a small stream. Although, the watercourse was rough enough for crossing, our teammates did not mind getting wet. Some tried to fly over, some walked on water and others tried for other remedies of crossing it without getting wet. It was fun to watch different practices for the same action- the act to get to the other side of the stream.

The Other side of the stream which was a reasonable ascent challenged us to climb over and pushed us into the Bosan wood. Further more we walked inside the trees, and directing ourselves to be at the hill, second to the Bhuvaneshwor, where a lonely cottage type was sighted, which the locals called it the White-House.

In about 1 hour of walking uphill, a bit tough, but sincerely worthwhile efforts were duly paid for the climb as the route provided us an awesome view of modern Kathmandu valley and the country side of other parts equally. With the enjoyment we witnessed the WH of Bosan. It looked like a private property, a summer house, and the owner lucky one.

Further ahead there was another Funnel hill connecting with Bosan hill, where we munched, rested and sighted the breath taking view, giggled and juggled for few minutes and descended from Funnel towards other side of Bosan village, where we walked about 45 minutes and discovered office van waiting for us at Chalnakhel. That drove us to Dhobi Dhara for a Thakali delicacy. After concluding with the food for thought we followed our individual course.

Those were the few memorable and funny moments, scene and sounds that really made us forget java and sql behind, if not at least for few hours.

We had lots of fun; even though it was sweet and short.

02 RamDev+YogaGuru-Live= Actions, knowledge and devotion for spiritual insight and trannquility

04 Team with first gear to move on

06 In a forward direction

07 Puja with an anxious feeling

09 Shamesh demonstrates how to fly over the watercourse

10 Here Namrata exhibits how to walk on the water

11 The first destination-locals call it White-House

16 The pond is called Taudah

19 Rest for individual taste yet together

20 Kirtipur in a ship shape but not thatbright

25 Not clear but view of two cities Kirtipur and Kathmandu

28 Different vista-Lined up and climbe up

33 Towards Matathirtha, can be another route

38 Subin, Rajiv and Shiv trying to locate their area

40 Rajiv truly sure with his forefinger about the spot

43 Climbing down from funnel

50 The funnel at fullest

51Waggle jeep runs for in a steady manner

52 In a village a beauty that appeals tothe senses

53 A busy respect to the Thakali goody