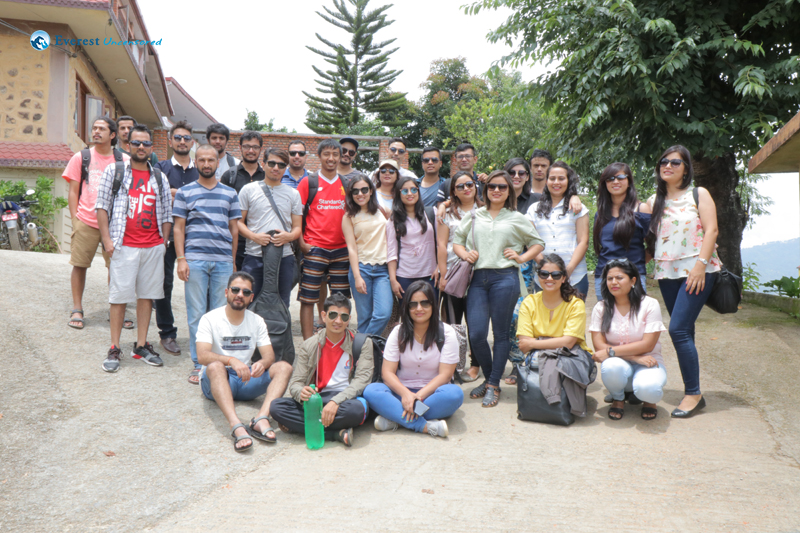 First outing with my team, I was very excited. We were told to be taken at “green valley resort, shivapuri”. Everyone of us arrived at office at 1 pm and then begins our journey. We started singing songs, taking photos in bus. Slowly we headed towards mache gau. We were wondering where were we going.

Everyone of us started thinking about where could be our destination as that wasn’t the way towards Shivapuri. Then we finally arrived at our destination “Khusi Khusi Family Resort”.

Everyone of us started thinking about where could be our destination as that wasn’t the way towards Shivapuri. Then we finally arrived at our destination “Khusi Khusi Family Resort”.

Everyone were surprised after we reached our destination. Then we went to our room had some rest and then at 4 pm we had a breakfast which was very delicious. After having breakfast our celebration committee called us for gaming section. We had three teams for each game. All the games that were prepared by them were very enjoyable. Winners of the game were given some surprising gift. We played 3 types of game and then we decided to had swimming. Though I didn’t swim but I was enjoying seeing the fun that my team was having inside swimming pool. Some of us then started dancing and having some drinks. Then at 8 pm it was our dinner time. After having dinner we had barbecue time. We started dancing, singing, having barbecue till late night. Then we all were so tired so everyone of us went to our bed to had a deep sleep.

Next morning started with a tasty breakfast. After having breakfast again we started playing games which was very fun. After playing games we returned. We had a plan to had our launch at “Tama” so we arrived there at nearly 11 pm and had an amazing launch clicked photos and then returned. Then on the way we had an icecream as well. Then we finally arrived at office at nearly at 1 pm.

Having team like this always lead to have fun wherever be the destination. It is the people that makes your journey amazing not the place. Thank you my amazing and lovable team for all the memorable day .

I was waiting for our trip to Shivapuri – Green Valley Resort since few weeks earlier. It was my first outing from Deerwalk, so I was very very excited. Finally, the long awaited moment had arrived. Being a nature lover, I was really looking forward for the trip and greenery of Shivapuri.

I was the first one to arrive at the office at 12:30 pm with a big smile on my face. At around 1 pm, my friends arrived. We headed to our destination at around 2 PM. The journey was full of excitement and adventure. The bus “Exploded” with entertainment and all of my colleagues were either singing, dancing, taking photographs or cheering each other up.

We were told that our destination was Green Valley Resort, but then our bus headed towards Kalanki which was the opposite route to Shivapuri! All of us were startled. Then our coordinator told us that we were heading to Trishuli Riverside Resort but that wasn’t true. Finally, we came to know about the surprise destination that was KhusiKhusi Resort only after we actually reached there at around 3pm. As scheduled, refreshment drinks and snacks were offered and team building games were played. I was a member of team B who didn’t win any game! After that everyone started to swim as the swimming pool was the main attraction of the resort. Some of us didn’t swim because we didn’t have costumes as we were not aware about the swimming pool being the only attraction of the resort. We had music, dance, drinks and lots of fun.

A delicious dinner was served by the resort and then our barbeque party started with dance and music. All of us danced our hearts out.

A delicious dinner was served by the resort and then our barbeque party started with dance and music. All of us danced our hearts out. Some of us were still in the pool. A few rounds of “Antaksri” went on between Scrub and Production team. I went back to my room at around 11.30 pm but couldn’t sleep until 1 or 2!

The next day started with a really good breakfast of toasts, jam-butter, sausages, potatoes and a glass of mango juice. After recharging ourselves with such good food, we had another rounds of games. We played bingo and another team building game which was really fun. After that, we started packing our backs and getting ready for departure. On our way back, we stopped for lunch at Tama Restaurant and enjoyed ‘ThakaliThali’. Then we headed to BhatBhateni Supermarket for ice cream. We headed back to office where we rested for a while and headed home. The outing was really a memorable one, especially because of the venue suspense. I guess none of us will ever forget the surprise!

As this was my first outing from Deerwalk, I was so excited. It was Friday July 29 when we went for outing and the destination was ‘Green Valley’. We all gathered at Deerwalk and moved towards destination at sharp 2 PM. Before moving ahead all the boys had a tequila shot of homemade local alcohol brought by our Manager Manish Dai. That alcohol was so nice and strong. After having a shot we all ran to bus with heat. The bus started moving not in right direction, but towards the opposite direction. But we didn’t care as we were having lots of fun inside. As we reached Thankot, we all came up with big surprise that we are not going to Green Valley Resort. We came to know about the Resort when we reached there. It was “Khusi Khusi” resort. The resort was small but nice with a swimming pool.

We were offered snacks with beer as we reached there. After having snacks we started playing team building games. I was on Team C and we won only one game. After playing games we took another couple of beers, got drunk and dived into swimming pool. It started getting fun when I took wine and music started rocking us all. At 8 pm, it was dinner time so all those who were swimming came out of pool and had dinner. After having dinner, dance party started. Everyone was dancing, and as I was music coordinator, all those songs were my responsibility. After some hour, we got tired so we sat and started jamming. I brought guitar to play, but I couldn’t because I was so drunk.

How can I forget that old man, who joined with us and started singing by playing guitar with no chords, but he entertained us anyway.

How can I forget that old man, who joined with us and started singing by playing guitar with no chords, but he entertained us anyway. After gala round “Antaksri” round started until 11:30 pm.

The next day started with yummy breakfast. After having breakfast we had another round of team building game. There was another surprise game called ‘BINGO’ brought by coordinators where I won Rs 500. There were other indoor games like pool and table tennis as well. After playing games we departed from resort and went for lunch at the Tama restaurant and had ‘Thakali Thali’. After having lunch we headed to Bhat Bhateni Supermarket to have ice cream. After that we headed back to office,took some rest and then we headed to our homes with wonderful memories we made.