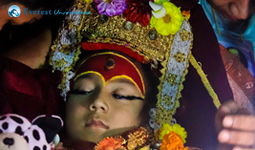 Photo Description:
This picture was taken during Indra Jatra at Indra Chowk. The little boy in the picture represents lord Bhairav. The chariot arrived at Indrachowk and I was quite lucky enough to climb on it and get a close up view.  The festival of Indra Jatra continues for eight days with much rejoicing, singing, dancing and feasting. On the third day of the festival of Indra Jatra, the living goddess Kumari is taken out in a procession in a chariot. “Kumari”, the “living goddess”, is considered to be an incarnation of the goddess “Taleju”. Chariots of Kumari, Ganesha and Bhairav are taken around the city for three days. According to Hindu beliefs Ganesha is the son of Shiva and Parvati who has a head of an elephant and Bhairav is another form of Lord Shiva himself.

116 thoughts on “Super power or human, rest is inevitable”