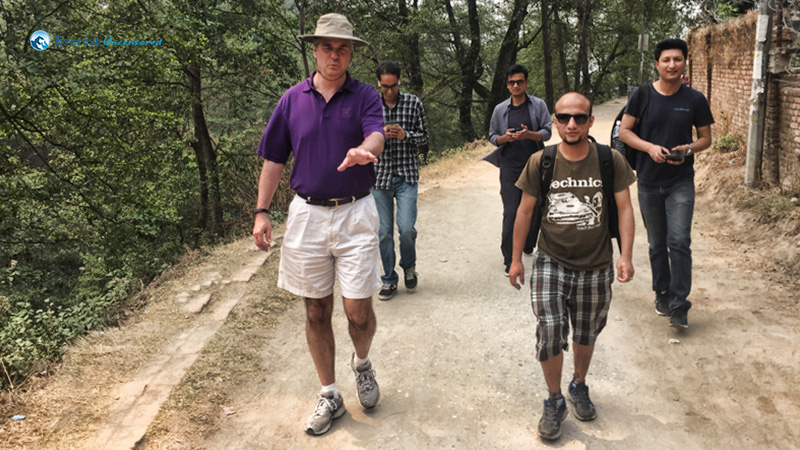 It is the participants who make a hike more enticing and fascinating than the route or destination chosen. It was not my first hike with Deerwalk, nor was it the first time I was going to Sundarijal hike but it was my first hike with this group.

Our trip started from the office as Deepak picked everyone en-route. Praveen was picked at Balaju, Kapil at Kalanki, Ashish at Kalimati, Bill at Annapurna, Pramod at Ratopul and I was at Gaushala just after 9 am.

After purchasing liquids for the hike, we headed towards Sundarijal bus park to start our hike. We reached there at 10 am. The weather was sunny but it wasn’t too hot. It was in fact a great weather for hiking. As we started hiking, in every 15 minutes or so,

Pramod would say it’s already half way to our destination and Bill would laugh in surprise.

Pramod would say it’s already half way to our destination and Bill would laugh in surprise. We reached the waterfall in about 25 minutes of walking. The waterfall was not as spectacular as usual due to less water in dry season. We rested there for some time and had some liquid as everyone was thirsty. We started walking after some time of resting. Three of us, Bill, Praveen and I, were not carrying bags so other three, Pramod, Kapil and Ashish, had to carry all liquids for our hike. The ones not carrying anything were always ahead during hike. At 10:45 we reached the entrance point to Shivapuri National Park. We bought six tickets and went inside the park.

It was not a long hike so we were not in hurry. We had some fun while walking in our hiking route. We stopped at few places and took a few photographs. We reached near Sundarijal dam around 11:15 am. After few minutes of walking and capturing some pictures we went to a hotel for lunch and refreshment.

The hotel was small and nice. We had some snacks and drinks there. We played music with speaker brought by Pramod. Then we played poker for a while. I had played poker only two times before so I wanted to learn more. Chips were distributed to all of us. Then we had our Nepali lunch. After lunch, we resumed poker. Praveen was the winner in poker.

We then chose different route to return to Sundarijal bus park to catch office van. None was sure about the route so we asked locals about the way to follow. Bill shared his experiences about his life which made the hike more interesting. After some walking and adjusting our route based on local’s response we caught office van. Overall, it was a memorable hike, which will be cherished by all of us forever.