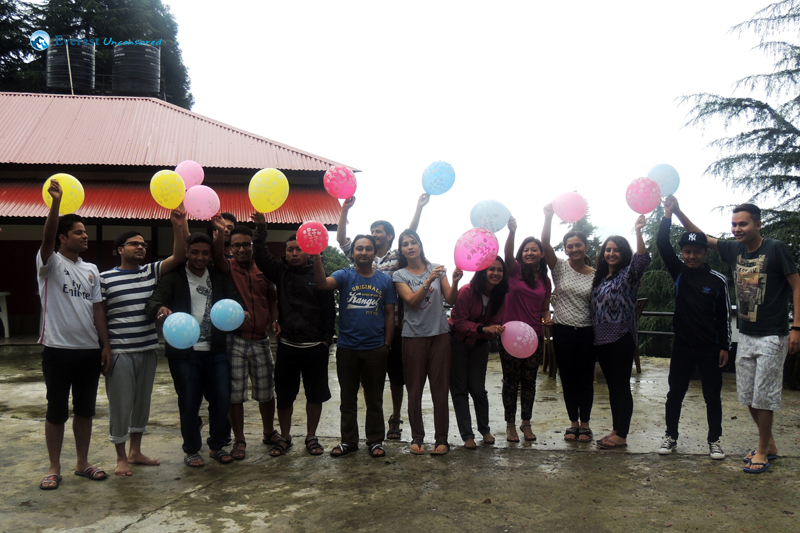 My very first outing since working in Deerwalk and excitement over crossed the limit as our destination was Shivapuri National Park. All of the QC colleagues from PA, CM and HP including myself gathered together and headed up to our destination around 1 PM. After heading up towards our destination, unfortunately on half of the way our vehicle couldn’t move forward as the road was too much slippery due to rain. So, we decided to reach there by walking. Despite there was nothing aside the road and jungle, we still had loads of fun. I captured those moments in my phone as a documentary video. After walking approximately around 7 km in 2 hours, we finally reached to Shivapuri village resort which was much more beautiful than I had expected.

Hospitality served was really great in resort where we were assisted to check-in immediately into clean and beautiful rooms.

Everybody were busy in taking pictures of beautiful sceneries of resort peripheries.

After walking for 2 hrs we were extremely hungry and tired. Nobody could stop us to eat that delicious snacks. Yummy dishes needed to be digested so what could be much more fun than having a dance party with young and wild guys. One thing which I enjoyed most was Kamal dai dancing in the song “Taal ko pani” which couldn’t stop my cheeks crumpling and lips stretching from east to west. Finally our dance party stopped around 8:30 pm and we were served local cuisines in dinner. After having dinner everybody were in the mood of talking, singing, and playing none other than “Antakshiri”. I was feeling sleepy as the evening was turning to overnight and I went to sleep after having too much of enjoyment.

I woke up early in the morning, opened the door and step outside the room. Suddenly my mouth kept opened, eyebrows lifted up.

Wow! I couldn’t stop my thumb to click and capture that awesome cloudy and greenery view.

Wow! I couldn’t stop my thumb to click and capture that awesome cloudy and greenery view. That feeling when u wake up early in the morning and get a chance to see a heaven healing the soul is really a precious gift. I would like to thank our outing coordinator, colleagues and Deerwalk for letting me to have this opportunity to cherish.

It was so boring when the time passed so fast and reminded us to leave that awesome place. We began to walk again to reach the same place where our vehicle couldn’t move forward. While walking on the way me as a cameraman on behalf my colleagues as an audience and Suman as a reporter had lots of fun and those unforgettable moment will always be in my memory. Walking so long we reached to that place where our vehicle was waiting for us. It was never like before reaching home with a profound heart.

As I had been here for only a month this outing provided me a chance to know the people I had met and been working more personally. Our outing was scheduled on July 8th 2017; the QC teams for CM, HP and PA along with me were headed for Shivapuri Village Resort about which everyone was excited.

It was a sunny Saturday, we gathered here at Deerwalk at around 12 pm. and were ready to leave. We picked up few members along the way and were set for our destination. As we reached near Jhor we had to stop due to bad road condition and we had to walk till the resort which was 6 km from the stop. Our outing turned into a short hike just like that.

At a glance the road seemed well but as we kept going the road kept getting muddy and slippery.

At a glance the road seemed well but as we kept going the road kept getting muddy and slippery. After reaching midway the female group along with our bags went to the resort in its jeep. The men were left to walk the distance. However, the experience was pretty cheerful as my friend Moti started vlogging the whole way up and we got to joke along the way until we reached our destination.

However dreadful the way was, the destination was indeed very beautiful. With small villas and well maintained garden, the resort was in a secluded place with exclusive scenery which was perfect for us to relax and unwind. We were welcomed by tasty snacks. After everyone had freshened up, we went down to business. As it was pouring I sat near the fireplace enjoying a cold can of beer while watching my colleagues dance. The songs were on point and so was the dancing. The whole ambience was lit up by the energy of the people dancing. Shortly after, we had our dinner which was amazing. After we continued with antakshari, which I sadly did not take part in but enjoyed watching those who played and doing so our night had ended.

In the morning, after breakfast we continued the fun with team building games such as balloon race and brick building, in which my team didn’t win but we had good time interacting with each other and had loads of fun. After numerous photo sessions we had lunch and were ready to leave.
We had to go to the same place where the bus dropped us off. The road was even murkier than the day before as it rained all night since we got there. But again, we started to vlog, sing and joke around so way back down was as fun as the way up.

It was very delightful experience for me and I hope to have more memories like these.