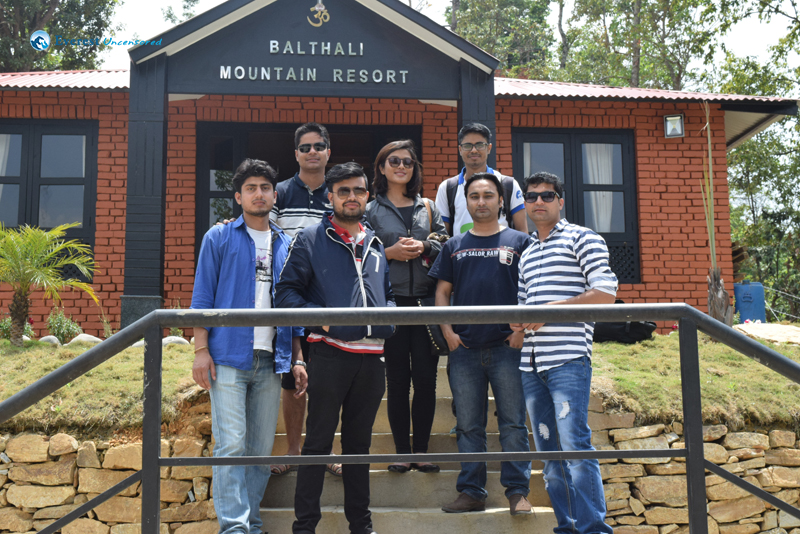 Bishal Acharya
Outing to Balthali Mountain Resort, a fresh start for me to get involved in team building programme of Deerwalk. This has really established a new connections of friends and colleagues of all quality assurance department. During our journey from office premise to Khopasi by bus, Popular lokdohori sung by one of our colleague has caught everyone’s attention. Similarly, one hour hike was possible due to uneven ways from Khopasi to Resort. During the hike we came across the two wonderful bridges in which one was much higher than the other. Several clicks has been taken with peaceful nature. Various mountain ranges was viewed during our hike. At the resort, we got respectful welcome with a glass of soft-drink. Then we were guided to our respective rooms where we relaxed for sometime in order to get rid-off tiredness. After that, we were offered with the delicious snacks and some refreshments. The main highlight of the outing was gained through the participation in team-building games among the four different squads. Each squad consist of 9 members and was led by a team lead.

At the beginning of our team-building games, we went on for playing first two games among the four selected ones. Both were quite tricky and full of amusements. In the first game, Participants need to fill the water in a glass consisting of a ball so that they can blow it to another glass. This process continues until the ball reaches the final glass and this decides the winner as well.

Similarly the next game was to circulate a ring among the participants who were standing in a circle by holding each of their hands and the winner would be the one who finishes the game in lesser time-frame.

Similarly the next game was to circulate a ring among the participants who were standing in a circle by holding each of their hands and the winner would be the one who finishes the game in lesser time-frame. After that the event at night went on with bonfire, dance, music and delicious barbecue along with hard as well as soft refreshments. Nearly at 9:30 pm, we had our dinner and after that some went for sleep and some stayed for enjoying the full-moon night. At 8:00 am in the morning, we were served with the breakfast consisting of some local food items like home-made breads and curds. After that, we played our remaining games – Treasure Hunt and Blind folded Item pick. The most of the games were won by squad ‘C’. Then at 11:00 am we had our lunch and had checked out from the resort at 12:15 pm. And we again took a hike from resort to Khopasi in order to catch the office bus which lead us to Kathmandu office. I am really grateful to have got opportunity to be part of the great outing programme from Deerwalk and make wishes to be part of it in coming future.

Durga Prasad Subedi
Our much awaited trip started on that day at around noon from Deerwalk complex. Fun started soon from bus itself when enthusiastic mates started to Drink, Dance and play Dohori. Beautiful scenarios on the way to Balthali compelled some of us, nature lovers (like me) to plan for next visit, on short breaks, as the places were just few kilometres away from Kathmandu. The journey continued frolic ally on bus and I didn’t feel like we reached the Khopasi Bazaar, where we found out that our bus could not go up the steep road leading to the resort. So, we carried our bags and escalated for hike along a rocky trail beside small streams and pine trees. We feared for the rain but the weather favoured us to ape up the hill.

Hanging bridges on the way were a challenge for some of us while others enjoyed taking photographs, videos from there.

Hanging bridges on the way were a challenge for some of us while others enjoyed taking photographs, videos from there. Shortly, we reached on the top (Balthali Mountain Resort), got refreshed, had wonderful snacks, drinks, played some group games and we were all ready for much awaited Barbecue followed again by (3D): Drink, Dohori and Dance. Everyone was on their best and still had enough fun. Hima Bhai created a small but unforgettable platform with his lovely guitar where some of the bathroom singer (like me) joined and sang. I really enjoyed that tune.

The night was over and the sun knocked my window, early in the morning. We gathered for coffee, captured some snaps and waited for late breakfast by playing cards. After having amazing breakfast, most wonderful and awaited game Hidden treasure was played which added more fun. By taking lunch at around noon and some group photos, we returned back.

To wrap up, it was relaxing to forget both bugs (personal and professional) and of course to know each other as I was new to deerteam. Overall, the outing was a beautiful piece of paint in great canvas of life. This outing will be stored as a special memory on my disk  and in Deerbook for all of us.

Shweta Manandhar
We were around 36 of us making our way through the road of Banepa and our destination was Balthali, a small village which links the Roshi and Ladku River, behind Khopasi which is about 40km from Kathmandu. The guys in the bus singing dohori and dancing in the tunes of the folk songs quite was entertaining.

The guys in the bus singing dohori and dancing in the tunes of the folk songs quite was entertaining.

It took us about an hour to get to the heart of Panauti village. Little did we know that the bus wouldn’t be able to take us up to the place where we were planning to stay, we had to grab all the stuff out and start walking. The highlight of our hike was crossing the longest suspension bridge that I’ve ever seen situated over the Ladkeshwor River. The hike was a lot of fun specially because we stopped at some places to adore the scenery and take pictures along the way.

After an hour hike, we reached beautiful Balthali and the place where we stayed- Balthali Mountain Resort. We were welcomed by the staffs with soft drinks and snacks that we got to have overlooking the beautiful landscape of the Panauti village.

The team building games were equally refreshing and fun followed by taking pictures of few of us having fun, making silhouettes against the sky.
The juicy barbeque chicken and other snacks were mouth watering which we enjoyed sitting around the barbeque fireplace…and of course, no outing would be complete without singing and dancing specially when you got a talented group of dancers and singers. There were unlimited varieties of food for dinner and the sweet pudding cake for dessert was delicious.

The next morning, most of us woke up really early. I couldn’t wait to look outside the beautiful Panauti village and feel the morning breeze. The breakfast was filling enough to be ready for the team building games played by four teams. It was both creative and fun- hats off to the team who organized the team building games.

After a fun filled experience, we left the resort around noon. It was a bitter sweet moment for all of us as had to leave this beautiful paradise called Balthali.

Many thanks to all the co-ordinators who made this happen.