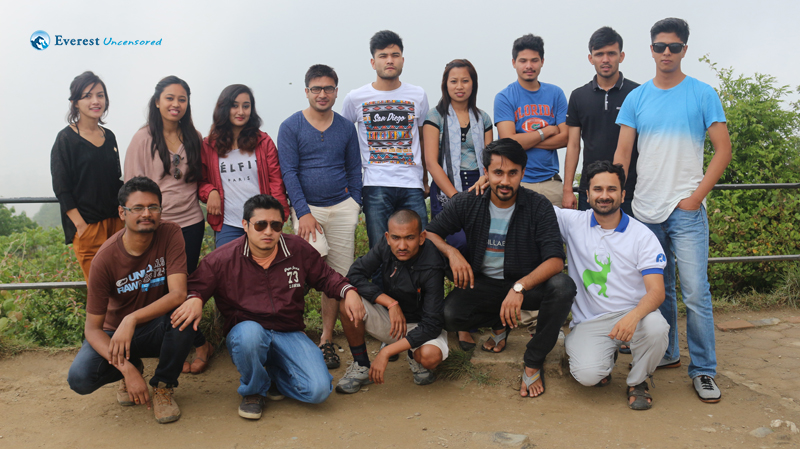 Just completed a month in the office, new to everyone and vice versa, got an amazing opportunity to be familiar with the team and know them better. For the outing this time of the year, our team decided to go to Nagarkot and after all the arrangements and plans regarding the trip, we had our day, 14th of May, 2016. Being a new member, and most probably the silent one, I was eager to go on the trip, have fun with the team and get to know them well. The day finally arrived, and as per our discussion few of us met in the office around 2 o’clock and headed out for the most awaited trip. We had carried a few items needed for the trip but snacks, drinks and other items were still awaited for along with other team members. As we headed towards our way we picked up our colleagues at their suitable locations. Had quite a laugh when we returned from Koteshwor back to Baneshwor because one of our colleague forgot her belongings in the place, she was waiting for us. After that, we again resumed our journey, picking up everyone. After everyone got in the van, we started opening packets of snacks, drinks which Nitish and Prayash had brought along with them. That was the moment I realized the trip was going to be fun.

With jokes being cracked one way or the other by almost everyone, we did not feel it was a long way to Nagarkot. Every one of us had an assumption of what our hotel would be like. We passed our journey discussing about our hotel “At the End of the Universe”. Finally, we reached there, roamed around for a bit and went in our respective rooms to freshen up. In a short time, we gathered around, started with a few snacks, few chit chats and few clicks. Awarta Dai was in a mood as he was our photographer of the day. In the evening, with the cool breeze and changing weather, we sat around, had a BBQ, drinks, more trivial conversations. There was one small problem,

we did not have a music system to enjoy, but we found our way with a guitar and a djembe provided by the hotel staff, sang for quite a bit of time.

we did not have a music system to enjoy, but we found our way with a guitar and a djembe provided by the hotel staff, sang for quite a bit of time. Around 9, we were called for dinner, had a homely dinner served by very charming people. Drinks and the witty conversations after that was a part to look upon and laugh out. After around 11:30, we ladies went in our rooms and had our conversations of our own while we could still hears boys laughing and joking around.

Almost everyone who were asleep, woke up around 4:30 when we felt a tremor of the earthquake. A wooden house at the top shook very well to make our night an early morning. Some of us woke up after that while some went to sleep again. Around 7, 7:30 everybody gathered around for breakfast. We captured few pictures for the memory and then went to our respective rooms to be ready to return back. At around 8 o’clock, we checked out from the hotel and headed towards the Tower. Not much time was spent there but the time we were there, we had fun, Clicked pictures, picked up aiselu and blueberry and roamed around admiring the view. After around half an hour or so we got into our van to head towards Kathmandu. All the way long, we sang all sorts of songs, talked about the experience we had that night and all other stuffs. Finally, we reached Bhaktapur and started dropping off colleagues on the way. We had just reached at Lokanthali when we got into a traffic jam. After around 30-45 minutes, we decided to change the route from Gathaghar to Gothatar and to office, and respectively headed towards the office. Finally, we bid goodbye to everyone and wished all to take care and get some rest and moved out to our own places.

The hotel was a small place, a cozy one though, had no music but we managed it well. It would have been boring if it were not for our wonderful team and the easy- going people. It was a tour to be remembered and especially for me a way to know others, have fun with new people and an adventure to be admired.

Prabal Chandra Sharma
14th May 2016, we have planned to go to Nagarkot from outing. Since this was my first outing in Deerwalk, I was particularly excited. The van in which we are planned to go to Nagarkot left the office premises in around 2 pm. I was waiting for it in Koteshwor and soon we were in our way to Nagarkot, which was roughly 17KM away from Bhaktapur. On the way we picked other team members of team V and with full team members on board we were on the way to Nagarkot. Our outing coordinator did all the shopping for the trip including snacks and water required for the trip.

The day was at first sunny but as we near Nagarkot rain started to pour. Any way the way was very fair for travel, not so hot yet not so cold. We reached Nagarkot in around 4-5 p.m. had booked Hotel End of Universe for our stay. It was a great place to stay since the place had number of small houses made of Wood. Arriving there we went to our rooms and to dump our luggage. The room was also great. Then we gather in common area. There we had great time talking to each other and we took lots of pictures and then it was snack time.

In the evening we had barbecue which was very good and we sang and danced the whole evening.

In the evening we had barbecue which was very good and we sang and danced the whole evening. In around 9pm we had our dinner which was again very good. After that we went to our rooms and slept.

Next day 15th May 2016 early morning after having breakfast, we went to Nagarkot tower for sightseeing, but unfortunately the weather was not so kind, so we decided to come back. Around 10am we started our journey back home. I parted with my colleagues in Bhaktapur.

This outing trip was very refreshing and I am already looking forward for many more trips like this one.