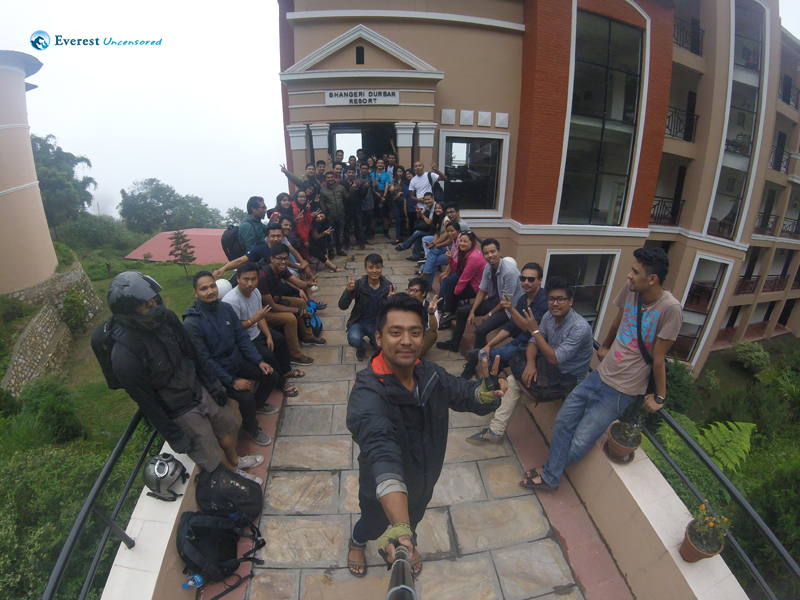 It was my first outing with my squad and the excitement was abiding. I am an outgoing person and I love to travel, I believe travelling is the thing that can make you forget all life’s little worries. The theory that “nature always nurture” sounds so true to me and it always rings a bell in my heart. The bus came to Baneshwor. I got into the bus with enthusiasm and to my surprise I found the bus almost empty with only Anil Dai and Barsha Di in it. I was anxious thinking if the outing was cancelled or something and then to my relief I got to learn that there were two buses one took the route from Gausala to Tinkune. We picked other people on the way and headed to ‘The Bhangeri Resort’. The road was muddy and slippery due to the rain. After about 2 hours of travelling we reached the resort. The resort was six storied building with a wide parking in-front and a beautiful garden behind. The hotel provided us the royal welcome with refreshing nectar. Once we got to our respective rooms; we kept our bag packs and gave ourselves a touch up. Then we began exploring the resort. Each room had a balcony that would face the silver like shining the mountain with myriad trees on the base. And we could actually communicate with the whole team from that balcony itself. By this time my tummy already started making hungry compositions and soon after we were called up for snacks. After we power packed ourselves.

Anil Dai announced of team building games. All of us were divided into three teams with eight participants in each team. The first game was Human Knot. In this game each member in a team has to cross their hands, hold hand of other members in order to create a tangled knot. Then they had to untangle themselves into a circle without leaving each other’s hand. The game required smart moves and cooperation. Here each team member was equally responsible to win the game for the team and the same theory applies at work too.

The second game was full of fun.Each team was provided with a bowl and a tennis ball. The challenge was to take the bowl with ball inside from starting to end line but the bowl was to be held with a single finger of each member. It sounds easy doesn’t it? But it was really hard when we executed. With every step of ours the level where the bowl was being hold raised up and up. At a certain point the bowl actually was way above my height and I was being unable to reach. We lacked a good leader here. A leader should be there to uniform the team activity and make them work together. A leader is someone to check and balance the effort of each member. The game could easily be won if the team listens to a leader and work accordingly. Well no team won either of the games but then we learned an unforgettable lesson.

Yes of course in that fun we forgot it was monsoon, rain knocked our door. Where there is will there is definitely a way. The hotel staff shifted our dancing party followed by barbecue inside a large hall. We sang, danced and played poker there. Our dinner was soon served and after gobbling we all sat down to chitchat with each other. ‘The outing is the best time to pull your team member’s leg and take their secrets out’, Sabina di you gave full justice to this statement. It was about one in the morning when we finally dropped our never ending chant and went to bed.

I woke up at 7 and saw Pratiksha Di already standing in the balcony (the vision behind the curtain was unclear but I was sure that’s her).

As soon as I walked out the curtain to the balcony, I was on a different land (not exactly land it felt like standing on cloud, so delicate and so soft).

As soon as I walked out the curtain to the balcony, I was on a different land (not exactly land it felt like standing on cloud, so delicate and so soft). This was the priceless luxury that made us come out of the technical realities to the embodiment of heaven. We could not see the pearl like peak of mountains but this view was equally mesmerizing. The arc from where the greenery ended started the fairy tale galaxy. The fog covered the abyss with utmost care. The giant cloud of fog in a couple of minutes embraced the hotel. The bayou worked as a therapy to release our stress. We were all meditating the elixir of fog and the breeze (felt it was just born from the beach) and suddenly aroma of food pulled us. Now we were all set to leave. Since buses took time to reach the hotel Pratiksha di and I joined Nizu di, Sabina di, Prakrit dai and Roshan dai in the short dance party at their room. After few photos in the entrance of the resort we checked out of the hotel.

The trip was memorable and full of fun. I enjoyed every second of it. I had opportunity to know my fellows apart from their professional personality and I absolutely loved it. I hope this will help me to work with them more smoothly and comfortably in upcoming days.

This was my second outing from Deeerwalk and I was excited as usual. Our, Destination, Bhangeri durbar resort, was located around 17km from Bhaktapur. We had planned to leave the office premises at around 11 o’clock in the morning. I was waiting for it in Koteshwor and soon we were in our way to Nagarkot. On the way we picked other team members of Squad C and with full team members on board we were on the way to Nagarkot. Our outing coordinator did all the shopping for the trip including snacks and water required for the trip. We reached Nagarkot in around 3-4 p.m.We were welcomed by the staffs with soft drinks and snacks.

After taking rest for sort period, we played two team building games. Everyone enjoyed themselves throughout the evening.

In the evening we had barbecue which was very good and we sang and danced the whole evening.

In the evening we had barbecue which was very good and we sang and danced the whole evening. In around 9:30 pm we had our dinner which was again very good. After that we went to our rooms and slept.

The next morning we woke up early, this morning was a little foggy and rainy. We were served with delightful breakfast in the morning at around 8:00 am.After then, sager and me headed back towards home at around 8:30 am. It was a very enjoyable and memorable trip for me. Thanks to Deerwalk and coordinator for making it possible.