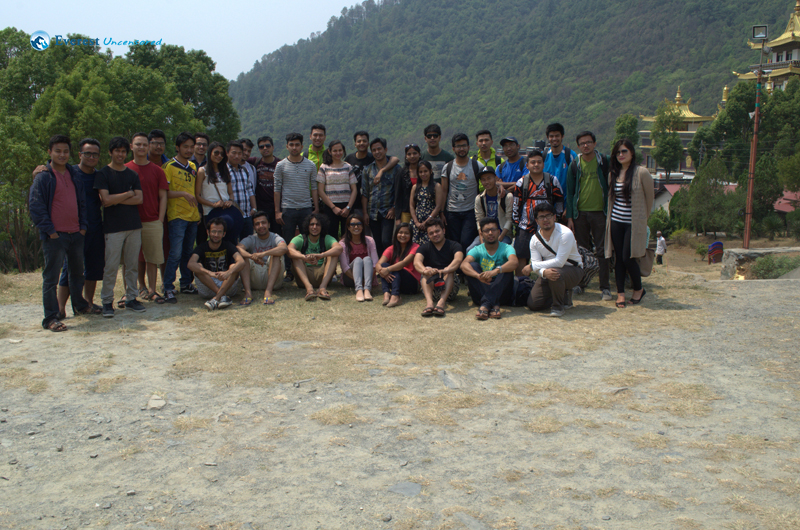 Kesina Baral
This outing being my first one at Deerwalk, I was specially enthusiastic about it. After a week long excited preparation for the day, on April 30th, we started for Dakshinkali Village Resort from Deerwalk premises picking our friends along the way. Few of our friends from OM chose to cycle to the resort.

We were set aback from our initial excitement and schedule due to heavy traffic and conflagration at Mane Bhanjyang. Many of our friends had to wait for hours at roadside under the sun but seeing them greet us with beaming faces couldn’t dampen our mood anymore and off we went singing our heart out.

The day was hot so everyone was looking forward to a refreshing swim but unfortunately, the service at the resort didn’t meet our expectations and we had to refrain from actually taking a plunge. Little saddened but still ready to have fun, we started humming to the tunes played by our very talented colleague Saurav Dangol. Combined with the dance from Shrijana di, Roshan dai, Divesh dai, the onlookers were so impressed that they joined us and offered us a treat of few bottles of beer.

Encouraged by their compliment, we sang until the sun set. We played a few team building games which was followed by barbecue and dance.

Having never seen my friends grooving to anything except code, it was great fun to see everyone carefree and relaxing

Having never seen my friends grooving to anything except code, it was great fun to see everyone carefree and relaxing. After dancing to our heart’s contentment, we sat down for a hearty meal. A few of our friends started on a deck of cards while some other were busy with the booze, whereas some of us passed the night playing dumb charades.

Tired by the previous day’s activities, we started the next day with breakfast at around 8 and got busy with the usual selfies and wefies until 10 when the bus arrived to take us back. Unfortunately to everyone’s dismay, we weren’t able to visit Dakshinkali temple but we being the ones to cheer up at any situation ended our outing with a game of antakshari and laughter.

Ankit Shrestha
Squad outing to Dakshinkali Village Resort was something special already for me.

As the journey started with pedals and gears, we didn’t take Deerwalk bus and nailed a week long plan to go on cycle. We headed straight to Dakshinkali and reached there ahead of time. Waiting for the DW bus to arrive with squad, we spent time under the cool breeze, resting and chatting. The bus was already two hours late so we decided to roam around the village on short single track trails.

Finally, the bus arrived after few hours. I was already so tired but the excitement didn’t stop me for a rest. After the lunch and few chitchats, everyone had beer bottles on their hands. I also had one. We all sat down together and started to sing. Trust me, everyone was singing. The same old Nepali songs, oh what a moment that was. Time passed so quickly, hanging around, knowing new people, that it was already time for dinner. Few rounds of “Passing the parcel” game were really funny.

Thank god I didn’t have to act like some Bollywood actor or act like a monkey. Then the night continued with jokes, laughing and chatting, and few round of cycling. Oh, also there was barbecue which was, an icing on the cake.

Early in the morning, there was nothing much to do. Breakfast was not ready yet, so we went to the nearest tea shop. Then the walk up to the Gumba, of which I didn’t quite catch the name, was so peaceful and quiet. Felt like this should be the way every morning should be start for everybody with those chanting prayers, those ringing bells and so much more. With all that fresh air and greenery around, what else would anyone yearn for. We returned back to the resort, had a delicious breakfast and packed our bags to return. At the last moment, the tradition of taking a group picture was completed and officially the outing ended.

That short period was so much fun. I’d like to thank Deerwalk, my team, the Squad, the co-ordinators and everyone present there. Had an awesome time and made many memories. Thank you.

Priti Oli
Away from all the mundane routine, bugs and deadlines, the much anticipated team outing promised a resurrection to all the teams in Deerwalk. As for a probationer like me, who did not even know that these things happen here in Deewalk, I was billowed with excitement. As the suggestions for day and venue actively poured in, I made my recommendations as well. It was decided that we would be heading to Dakshinkali Village resort on 30th of April, Saturday.

Not to miss a single thing on my first team outing, I reached the office on time. After the refreshments were packed and loaded on the bus, we were set to hit the road. As per our arrangements, we picked other team members on route. Moving ahead, we had to bear with an unexpected traffic congestion at Balkumari. The yearning to reach the spot and plunge into the swimming pool was more fueled by the scorching heat, traffic jam and the dusty road. As we surpassed the jam, the team members at the back seat started calibrating their vocal chord with some Nepali tracks. The spirit of team outing was kept alive as everyone joined in the singing.

When we reached the destination, we had to face a huge disappointment due to improper management at Dakshinkali Village Resort. Though everyone wanted to dive into the swimming pool to escape the heat, everyone was too grossed out to get inside. One could easily see the filth in the swimming pool. Upon checking into the rooms, another disappointment awaited us as there was no proper water supply to freshen ourselves up. We treated ourselves with some snacks and drinks and roamed around.

We were wandering around as we heard  some of our favorite songs being played. It was Saurav dai who saved the day with his guitar skills as he played various tracks and everyone joined in on his rhythm. Everyone else in the resort hovered around the mellow to join us in humming the songs. The children danced merrily to the songs whilst the elders, who were reminiscing their own youthful days requested their own favorite songs to be played. Singing was followed by a dance session where everyone danced their heart out. We also had a team building game where we played passing the parcel. Everyone who had the parcel in their hand when the music stopped was subjected to certain punishment. The game ended with Manish Dai being declared as the winner.

After the dinner everyone dispersed with their own group: some watched football while the others were busy playing cards, cycle or dumbshara. The next morning, to explore some nearby places we planned to head toward Shesh Narayan Temple. The temple was almost a thirty minute walk from our place. Shesh Narayan, a World Heritage Site  is one of the four Narayan temples of the Kathmandu Valley. Shesh Narayan Temple is a highly venerated Vishnu shrine surrounded by ponds and statues, tucked beneath a rocky cliff wall and a Tibetan monastery . The visit to Shesh Narayan was a treat to the mind, body and soul.

As we returned from the temple, breakfast was awaiting us. As soon as the breakfast was over, we were ready to return back. We clicked some pictures for memory and returned back home playing antarakshari. To wrap it up, Team outing to Dakshinkali proved to be a perfect way to beat Monday blues.

0 thoughts on “Squad B Outing to Dakshinkali Village Resort”