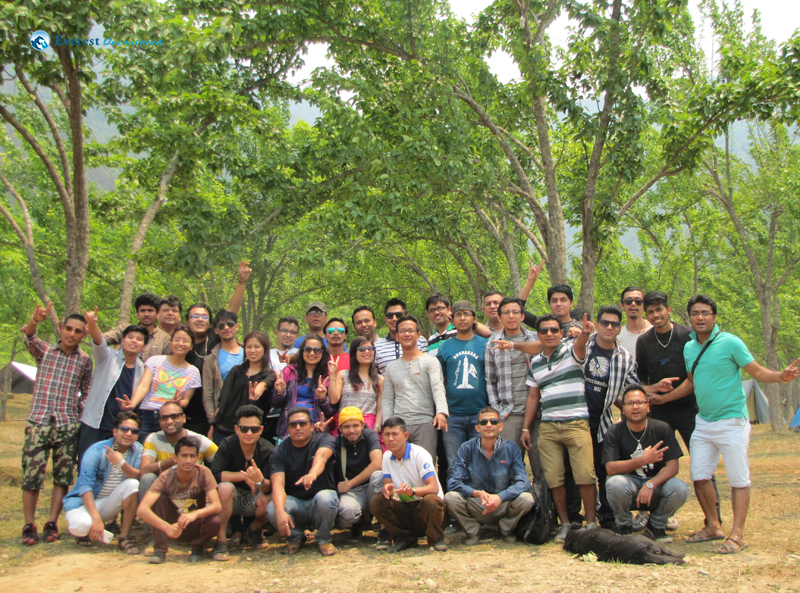 Rojesh Charan Shrestha & Sharad Devkota
On the 30th of April, Deerwalk’s Squad B members embarked on their much awaited outing to Chitlang. Being a newly added member to the Deerwalk family, I was full of excitement and curiosity. I figured it would be a good chance to get to know my colleagues and become well familiarized with them.

On the day of the outing, we had decided to move towards Chitlang just before noon. It was just supposed to be a normal 3 hours drive, however it turned out to be one of the most adventurous rides for all involved . From the beginning of our travel, the fun had begun from singing and dancing inside the bus to cracking jokes along the way. All was going well when the bad news broke out that the road ahead was blocked due to a forest fire. Everyone was very disappointed as we knew that this disturbance wouldn’t clear immediately and would considerably lengthen our travel time. However, despite the risk we slowly started to move ahead and after traveling further, we found out that an electricity pole had fallen down and a fire truck was busy clearing the way. We helped along as much as we could under the supervision of the police and firefighters and after 2 long hours, we were finally allowed to move ahead towards our destination.

The off road travel on our bus seemed to be the next chapter of our adventure ride including all the bumps, jolts and close corner

The off road travel on our bus seemed to be the next chapter of our adventure ride including all the bumps, jolts and close corner we experienced as we moved towards our destination.

We finally reached The Chitlang Organic Village, albeit a little later than expected. On reaching the resort, everyone was relieved as everyone needed rest after the exciting but tiring off road experience. However, once everyone refueled after the rest, the real fun started to begin. Sitting around the bonfire, everyone got busy drinking, singing, dancing and sharing their wonderful stories. Furthermore, a game was initiated by Awanish dai to break the ice between friends. Many hidden secrets were revealed and everyone got an excellent chance to know each other. The night had just begun as our team was challenged to a singing competition (Antakshari) by another visiting team at the resort. Needless to say, Deerwalkers gave them a tough competition and the match carried on till late night.

The next morning, everyone started to roam around the resort snapping away memories with their cameras. The holiday spirit continued as we played some more games to pass the time. After lunch, we decided to move back home. This time round, a different path to reach home was selected to avoid yesterday’s misfortune but, as luck would have it, the path chosen was even more bumpy and dangerous than the one before. However, everyone reached home safely, and the outing will be remembered by everyone as one that was unexpectedly adventurous but wonderfully relaxing.

Punam Bhusal and Santosh Pariyar
We (processing, production, IT, HR department) collectively decided to go to Chitlang on 30-04-2016 for Deerwalk outing 2016. It was a two days and a night outing. As per plan, some of us arrived at the office around 10 am. After finishing all our packing, we moved towards Chitlang. As we had already set the travelling route, we proceeded our trip by picking up the remaining members on the way. Finally, we were all together 45 attending my first Deerwalk team outing. We were provided a bus and a Hiace micro for the trip, so our trip was quite comfy and relaxing.

We had lots of fun on the way.

We sang songs, listened to the music and of-course the natural view of a mountain scene through the windows of bus added our joy more

We sang songs, listened to the music and of-course the natural view of a mountain scene through the windows of bus added our joy more. We had carried snacks, juice, soft drinks and hard drinks too. On the way, we had snacks. We were heading to our destination having too much fun.

As soon as we reached at the end of Kathmandu district, we unexpectedly faced a problem. The road was blocked and we had to stay there for a couple of hours. We all took off from the bus and realized our problem was nothing in front of the local people. As the forest was caught by fire since last night, everything was out of control. Then, People were shifted to open space and field along with their goods. We saw an earthquake damaged house on fire. The good thing is that, the house was empty. Because of the dry season and the strong blowing wind, the fire was caught so rapidly and widely. After a while, we heard a siren from a distance. It was fire brigade. It took an hour to take control of the fire caught in that damaged house. But, the problem was not solved yet. Fire was all around the hills and forest. One fire brigade was not enough to take control of the fire. We, Deerwalkers also helped them, although it was for a certain moment. We saw the fear on the villager’s face. They all have wished, if it could rain heavily. After some time, the road blockade was cleared and we moved on, wishing for the goodness of that village.

After traveling some distance, we left Kathmandu district and entered Makawanpur district. The road was narrow and construction work was being carried on. So, the environment was quite muddy, dusty and smoky. Beside this, we enjoyed our trip enjoying the scenery, the typical houses and local people and small bazaars, that appeared in a distance while. It was already too late to reach Chitlang, so we skipped our Kulekhani dam(the biggest man made lake) visit plan. After hours of travel, finally, we reached our resort, Chitlang Organic Village Resort at around 6 pm. If we flash back to the adventurous trip from Kathmandu to Chitlang, we would like to thank our drivers, Rabin and Deepak dai a lot for the safe drive.

We were taken to our respective home. Every 4 or 3 of us shared a home. We freshen up and gathered outside. Wow! The weather was so cool and the scenery seen from there was totally awesome. We were surrounded by the hills, mountain and natural beauties. We could feel the fresh and clean environment. As our resort was on the top, we were able to see the surroundings so clearly.

Chitlang is a VDC located at Makawanpur district, a part of Narayani zone in mid-hills called Mahabharat range. It is about 22 km far from Kathmandu. Chitlang is preferred for hiking rather than others. Chitlang has a rich newar culture. This village is surrounded by beautiful green forest which consist of more than 160 species of birds and animals. The large green fields are added attraction to Chitlang. There is a big apple garden with more than thousand apple trees. Few cottages have been built where we stayed. Characteristics of the village are its geographical diversity , flora and fauna.

We walked around the resort and the apple tree garden. We took some good snaps there. In the evening, we had some snacks, soft and hard drinks as per our choice. We formed a circle around the camp fire. We played games called know your colleague. There were prizes for the winner as well. Some of us were dancing, some were singing, some were drinking and some were gossiping. There was another group staying at the same resort to celebrate one’s birthday. So, we were requested to make his birthday more special. So, we sang birthday song and wished him happy birthday. We played “antakshiri” as well. Dinner was ready by that time and we were called to have dinner. Because of load shedding, there was no electric light. So, we had candle light dinner. I felt awesome to have such dinner with colleagues. Then, we stayed around the fire till late night . And then, we went to sleep.

Next early morning, we had our breakfast and went to visit the local areas. There we saw Nepal’s first and only goat cheese factory. We visited that factory where few people were operating that factory with typical instruments and techniques. One of the factory man guided us and shared the information about cheese. We bought cheese as memento of Chitlang. After visiting the surroundings, we returned back to our resort. Some of our friends who stayed at the resort, prepared for the bingo game and we played it. After some time, we had our lunch and then, we had our photo shoot. Finally, prizes were distributed to the respective winners of the games. At around 2 pm, we left the Chitlang Oragnic Village Resort and headed towards Kathmandu. After riding 1.5 hrs, we safely arrived at Kathmandu.

Sarin Rajbhandari
30th April was my 5th month of the work in Deerwalk and the day when I went outing with my colleagues to Chitlang . I was excited because I had never been there before and waited at my stop before the arrival of my bus which was supposed to come at 11 am. It was my first outing with the team, so I was a little bit concerned about my trip with them and how it would go. At first, I wanted to go with my old team, but then Awanish dai convinced me to come with the new team which I think was the right choice to make.

Then, I jumped in ‘Hiace’ from Balkhu with my other team members to Chitlang. Sun was scorching hot, So we decided to have some beer on the way. As we all know the road of our country which is very bumpy, it did not disappoint us at all. The trip was going well, but suddenly there was a halt on a road. After knowing there was a house caught on fire, we waited for the fire truck to put fire at ease. Following the blockade of the road, we spent several hours on the way to Chitlang. By 3 pm, we resumed our trip to Chitlang.

If you remind me the trip to chitlang, it still gives me that facial expression which is something I don’t prefer to show to anyone. It was one of the disastrous road, I have ever travelled after mustang. It was only the company in the bus that we were able to tolerate the ride and I still remember Nizu di, Ayush and everybody in the bus were counting the pitch road we went through. There was too much sitting in the bus and jumping throughout the road. So, Shyam dai thought of walking some distance to the resort.

Shyam dai got out of the bus and I along with Tulsi dai, Rita di , Nizu di and Hasan followed him. Then, we started our short hike towards the resort.

During that whole day of riding in the bus, walking was the best thing that happened till day

During that whole day of riding in the bus, walking was the best thing that happened till day. We tasted some local wine with the fresh air of Chitlang village. By 7 pm, we reached our destination. After a long day, finally, the fun started to begin. We played some game and antaksahari with the other group of people who were too staying at the same resort.

The next morning, everybody visited the goat cheese factory, which was popular in Chitlang, then, we played bingo along with the other participants . After lunch, we clicked some memories with the colleagues and headed towards the destination. Looking back on the trip, it will always be in memory for a very long time.