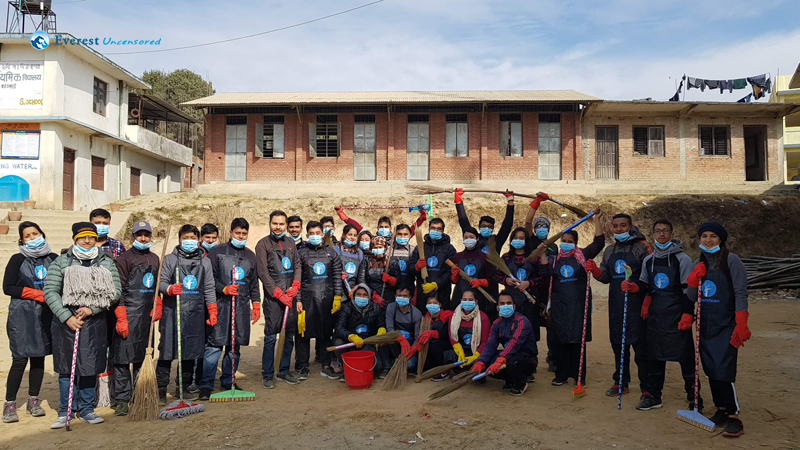 Deerwalk Services has been organizing different community and social events with an aim of raising awareness about social responsibilities of an individual and its positive impact on society. Deerclean is one of the events which is being held since 12th May, 2018, with major aim of maintaining the cleanliness and hygiene of school environment. Under Deerclean event, the squads take their turn to manage and participate in the program. Soon after welcoming The New Year 2019, on a cold morning of January, Squad B decided to start the year with heartwarming Deerclean event and offered their service to Kalika Sharan Madhyamik Bidhyalaya located at Jaharsing Pauwa, Kathmandu . Mr. Kabi Prasad Tiwari, teacher of Kalika Sharan, helped us contact the school administration and reach the agreement for holding Deerclean event. Although 1st January had already gone, we decided to make best of the first week of New Year and all the members of the squad were informed about the event going to be held on January 5, 2019.

In order to better plan the event, we made sure about the number of participants going to attend the event. After all the members had given their decisions, it was decided that 31 members of Squad B would be participating in the event. Everyone in the squad was starting to feel the ignited spark of excitement of visiting a new destination and being involved in a community service together with colleagues. It can be said that “the essence” of social responsibility was starting to pour down from all of our hearts and minds.

Although it was only a day wait, it felt like we all have been waiting for this moment to happen with huge curiosity. We started gathering at DWS premises from 7 AM. Some of us were helping the participants to manage and pack the tools and cleaning materials along with drinking water bottles and study materials. Some of the participants who had visited the place before, could be seen around the premises making plans and talking about the beauty of the place that we all were going to reach in few hours. With all the necessary equipment loaded into the bus, we divided into two groups. One group got into the van and another one, into the bus. In this way, our journey towards the beautiful Jaharsingh Pauwa began at around 8:30 AM.

Piercing into some of capital city’s traffics congestion and bumpy rides through ancient town located in north-eastern corner of Kathmandu called as Sankhu, we reached Jaharsingh Pauwa at around 10:30 AM. While we were watching sights along the way, we had discovered that Sankhu town was also known as Shankharapur. The bus and the van stopped and parked at the premises of Lapsiphedi Health Post, which seemed to be a joyful playground for the local kids.

The divided team then gathered and met Mr. Kabi Prasad at a hotel where we had breakfast as we all were hungry. Along with filling our stomachs, we were also filling each other’s plans and helping each other allocate the responsibilities. After half an hour, with stomachs full and mind filled with motivations, we headed towards the school by walk. Upon reaching the school, we found out that the school was near a rough road full of dusts and whenever a vehicle passed by, it would cause the dusts to wind through the air and enter the classrooms. We also saw plastics, papers and some other disposable as well as non-disposable materials on the playgrounds.

Feeling the need to speed up, we quickly started preparing the materials and dividing the arenas and work. Each room’s cleanliness was assigned to two participants and the rest of the participants were assigned the task of taking care of windows, whiteboards and playgrounds. Soon everyone was seen being dedicatedly involved in cleaning. Some new participants who had recently joined Deerwalk were working as well as talking to other participants, getting to know each other. After some hours of dedication and work from the hearts, change was observed. The classrooms and playground covered in dusts were looking like newly bought dress, clean and tidy. There were no traces of any papers or plastics after the cleanup and the grasses on grounds that were having some of the hard times growing up due to the materials laying around, seemed to have thanked us. We all imagined the look on the faces of students when they would come here tomorrow to attend their class. I think all the participants felt that the weariness of working, was dissolved in the fresh air and imagination of the happy faces of the students and staffs.

Soon after completing the cleaning, we found an appropriate place to dispose the collected garbage and dumped it there. We washed all the equipment and materials used for cleaning and also offered some cleaning materials to the school administration. After that we washed ourselves off with fresh water of Jaharsingh Pauwa and returned towards the bus. We took out the study materials (copies and pencils) that we had brought and handed them to the local children. We were amazed to see how humble they were and how sweetly they thanked us by saying “Thank You”. We were able to see “hope and ambition” in their eyes at that moment.

After handing over the study materials, we then headed towards the hotel after about half an hour and had lunch which was hugely satisfying because we all felt that we had just brought a positive change! I guess as a human, we all have tendency to help and provide each other with comfort, positive thinking, awareness and encouragement. And when one of these things is provided by us, we become happy. The same thing might have happened to us when we made the Deerclean event to be a success. This event made us more aware and self-conscious about how a small group of individuals can change the aspects of society. After heading off to Deerwalk, we all returned as a person who was now motivated to work for social cause and waiting for another opportunity like Deerclean event.

In this way, Squad B was able to contribute to environmental cause and awareness of the cleanliness of school premises. We thank all the team members, colleagues, school administration, DWS and CAC for this beautiful inspiration. We hope that in future, we will be able to do inspirational events like this not only at schools but every other areas where it is needed as well.

On 5th January 2019, Saturday, me and my Squad were ready to fight the war with Broom, mop, brush and cleaning chemicals as our weapon of choice and gloves and apron as our Shield. We were well prepared and all set to go and win it. Our enemy Dust, garbage and dirty places were also well prepared and ready to challenge us. It was a tough competition

Squad B participated in the monthly community service organized by Deerwalk named Deerclean. We selected one of the schools named Kalika Sharan Ma. Vi, Jaharsing Pauwa for the event. The event took place under the leadership of Anil Tiwari our onsite Coordinator who managed all our requirements and made our event smooth and successful. There were around 32 participants for this event. We all gathered at deerwalk at around 8:00 o’clock, and grabbed all the necessary items. At 8:30 we left deerwalk premises. It was Two hours drive with the rough road but beautiful view.

By the time we reached Jaharsing Pauwa we were all very hungry , so first we had our breakfast in the nearby hotel and then set out to clean the school. There were 3 buildings in the school. The first thought that came to our mind was “Will we be able to clean everything?”, but as we started we had lots of fun and didn’t know when it ended. We all divided ourselves into 3 groups. The first Group cleaned the Ground, collect wrappers and dry grass . The second group was responsible for cleaning classes. We divided 2-3 person per room. Their responsibility was to clean the floor, desk bench, window, door, and whiteboard. The third group was responsible for cleaning drinking taps, toilet, and other extra stuff. The toilets were very dirty and little difficult to clean. I was responsible for cleaning classrooms.

The whole experience was great. I enjoyed cleaning those rooms, the thought of students cleaning coming the next day and imaging their look gave me energy. There were lots of hurdles on the way, the major one was the wind who blow the dust from the ground to every corner of the school , stairs, as the ground was not pitched. All the classes were covered in dust. The taps, toilets were also very dirty. We started cleaning at around 11 AM, after 3-4 hour of cleaning we finally completed and cleaned the whole school. Now, it was time for Self-cleaning. It was a proud feeling that we did something to the society. Everyone’s face was glowing with happiness and hoping that the message of cleaning and its importance was transferred to students.

My favorite moment was when we distributed the notebook and pencil to the local kids. They were so excited to receive them, I remember them call their friend and exploring each others gift. The look on their face when distributing was priceless.

After all the hard work was done we went to the hotel, had our lunch and wrapped up to return home with the thought that even a small change can make a big difference. We all were satisfied with the feeling that finally, we won the war against dust, Yes we did it and it was really amazing and exciting. Never in our dreams had we ever thought of doing such an event. I in behalf of my squad would like to thank CAC and Deerwalk for this wonderful experience.

One thought on “SQUAD B – Deerclean”