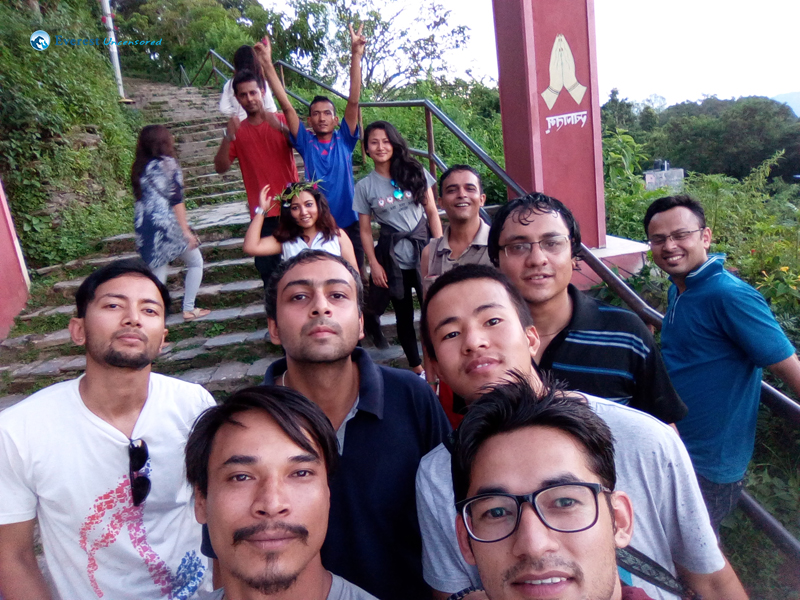 Harish Thagunna
Well, with lots of struggle I got chance to go for two days hike to Bandipur. It was set to be on 28th and 29th August 2016. I was very much excited for the hike because of the two main reasons: One-I got myself in the hikers list at the very last moment and other-I had heard about the beauty of Bandipur but not got chance to go there.

On the day, I woke up early in the morning at about 6 am. I freshen up myself and went to nearest tempo stand for a ride to office because I was joining the team from the office. I reached at the office about 7:45 am as it was decided to leave office at 8 am. Few of the friends were already present and some of them came later. We left the office at about 8:15 am. We picked few friends on the way. At about 9 am we reached Kalanki, till then all of the friends were inside the office van. We took a less bushy way to reach to Thankot to escape the traffic congestion that we may face on the normal route to Thankot. On the way we took breakfast at a motel that comprised of boiled eggs, chana fried and tea. At about 10 am we headed to our destination. On the way we enjoyed the music played on the van, a lot of funny talks and few selfies and wefies. We passed Thankot, Dhading Galchi and reached to Mugling at about 1 pm. We had heavy thakali lunch at Rupsi Thakali Bhancha Ghar at Mugling. As everyone was hungry and was aware of their upcoming circumstances, filled the bellies with as much as possible. We headed to our destination from there at about 2 pm. The closer to the destination we reach, the hotter it was.

We reached Bimalnagar Tanahu at about 2:30 pm, the starting point of our hike to Bandipur. We left the bags on the van and carried a bottle of water each and started to walk towards the hill upwards into the jungle. The route was well constructed. The higher we reach the more beautiful view we could see below. The view of the river was adoring. We took a lot of photos on the way. On the half way to Bandipur we reached to a cave called Siddha Gufa at about 3:30 pm. It was about 437 m long. We bought tickets to enter into the cave with a guide. The chill wind at the entrance of cave freed us from the tiredness and hot climate, they called that the natural air conditioner. At the entrance it was so cool where we took lots of photos.

Slippery dangerous path inside the cave, peace and only sounds of bats and water drops falling down from the roof of cave, rope walk, sitting silently for a while closing all the lights and just listening to the sounds inside added exceptional adventure to our trip.

Slippery dangerous path inside the cave, peace and only sounds of bats and water drops falling down from the roof of cave, rope walk, sitting silently for a while closing all the lights and just listening to the sounds inside added exceptional adventure to our trip. At about 4:15 pm we headed further to our final destination. We reached top at about 6 pm. On the way we took more photos. The view from the top was impressive. Everything was clear from the top. We could see the mountains covered with snow and the setting sun. Taking photos didn’t stop at the top, too.

We asked the locals for the location of our booked resort. It was called Hotel Mountain View Retreat. We headed to the resort through a typical beautiful street that remind me of the streets that we could see in Hollywood movies telling ancient stories. We reached the resort at about 6:30 pm. We freshen up ourselves so fast as if none of us was tired. Then, we went for short walk into the streets. We could meet many domestic and foreign tourists on the way. As, our festival Teej was coming nearer we found few women dancing playing Teej songs where many of the tourists were also enjoying. We had tea at a cafe. Few of friends proposed to have chilled beer and everyone agreed. We sat at a hotel and started having beer just a glass each. We decided to come back there after the dinner too. We went back to our resort to have dinner at about 9 pm. We had our special dinner and at about 10 pm we came back to the former beer bar. Sharing lots of interesting stories, events, we had chilled beer again for about 1 hour. Everyone enjoyed the company there. We returned back to our resort at about 11 pm. Then we went to bed as every one of us was so tired.

The next day after everyone woke and freshen up themselves we went for a short hike to the nearby hill at about 7 am. It was quite an interesting hike. Clicking photos didn’t stop there too. We returned from there at about 8:30 am then had breakfast. At about 9:30 am we headed back to Kathmandu. While returning we had lunch at Tanahu district at a hotel called Duna Tapari Thakali and Kitchen. On the way we stopped wherever we find a beautiful place to see and take photos. We reached back to Kathmandu at about 6 pm.

Overall, the hike was so memorable. The more memorable was the company of every member of the hike. I would like to thank all the hike members, coordinator and finally Deerwalk Inc. for providing such opportunities to the deewalkers.

Dipesh Bhatta
“One day your life will flash before your eyes. Make sure it’s worth watching.” We nailed this line. We were ready to add some color to our life, we were all ready to go on hiking.
I catched my team at Gwarko. When I entered the bus everyone started shouting from that very moment I told myself “It’s going to be fun brother”. Chit-chat started. Everyone was loud and excited.

Bus got rolling. Hyper-active person in our team started getting center of attraction. Guess who? He is none other than Wow wow Lava Kafle.

Bus got rolling. Hyper-active person in our team started getting center of attraction. Guess who? He is none other than Wow wow Lava Kafle. We enjoyed a lot in his company. Then everyone was talking about their route experience from Kathmandu to Bandipur. Finally we agreed to Shyam dai. Interesting thing about his shortcut route was, we always had to take left from there.

We took a stop at somewhere between our shortcut route. We all took some snaps, good breakfast and a cup of tea. We energised ourselves and geared up to our destiny. Again gossip started. This it takes another level, wow wow was asking our only brother from genomics to test his unique DNA and clone him. Thank god I don’t belong to genomics.

Time flies so fast. But wait, It was until everyone was as hungry as wolf. Expert were trying to find the best place to have lunch. Finally about one hour of research we agreed to have lunch at Robson hotel in the middle of Muglin bazaar. I discovered the voracious side of mine. Food was just wow and it was obvious that the place was recommended by Wow wow.

Finally we were up to our destination from where we were going to hike. After a few steps I feel like ants running on my forehead and then on my whole body. Alas, it was sweat all over my body! Despite of scorching heat and being all sweaty. We walked taking small breaks and a lot of photos. We found bandipur gufa. FYI, it’s height was about 40 meter. We gathered in front of the cave. We already found the heaven’s door: there was natural air conditioner. Except Lava dai, we all get going. It was dark inside, everybody was shining like fireflies. Oh gosh! Our guide was typically deep into his profession. Everything he saw just turn into some shape which was barely imaginable. But cave was full of fun; we slid, we did climbing with rope, walked on the lean ladder. It was full of thrills. We did meditation at the top of the cave. Everybody was concluding about meditation that they felt something divine in them. Anyway I didn’t feel anything like that might be I was too busy teasing my little brother Harish. Cave was once in a life-time experience for me because next time I will be more familiar with that darkness.

We take striding toward Mount view retreat at bandipur bazaar. Rumbling, stumbling and bumbling we head to our next destination. Ohh! I can’t escape saying that we took a lot of wefie/selfie there too. We were at the welcome gate. Wait, someone was coming there with a crown made of flowers. She was none other than one of our teammate- Mamta. Julina couldn’t hold herself, she snatched that crown and was ready for photo session. By the way snatch was not appropriate word there.

Oh my my… I took a moment of pause, “Am in the dreamland? What’s going on in this earth? Is this Nepal? or some kinda heavenly part cropped and added to this bucolic land?” all these things were hovering around my mind. At the very moment I promised to myself I will visit that place once again for sure. We put our stuff at our hotel. We refreshed ourselves and got ready for a night walk. It was night, it means it’s time to get boozed. At first we started with chilled beer in the open sky in the middle of Bandipur bazaar. I encountered two happy moments: first, a cute doggie holding his chin on my leg from nowhere and another one of my friend calling me his best friend after getting boozed. Legend says drunk people never lie.

We were little sober up there. We reached our location and finished having dinner. We started dancing, and drinking. Then almost everybody started getting tipsy. Then the one who hasn’t been mentioned yet started getting into the highlight. If I didn’t mention his name now, it would be a crime. Man of the booze party was Yashasvi Raj Pant. Dance floor was all covered by him. We danced till 3 o’clock in the morning.

Don’t ask me what other day was like. Full hangover, sweet memories and a promise, those were all I remembered heading back to home. Thanks to our Dabangg Coordinator Santosh dai and Shyam dai, we didn’t have to worry a bit about anything during our journey.