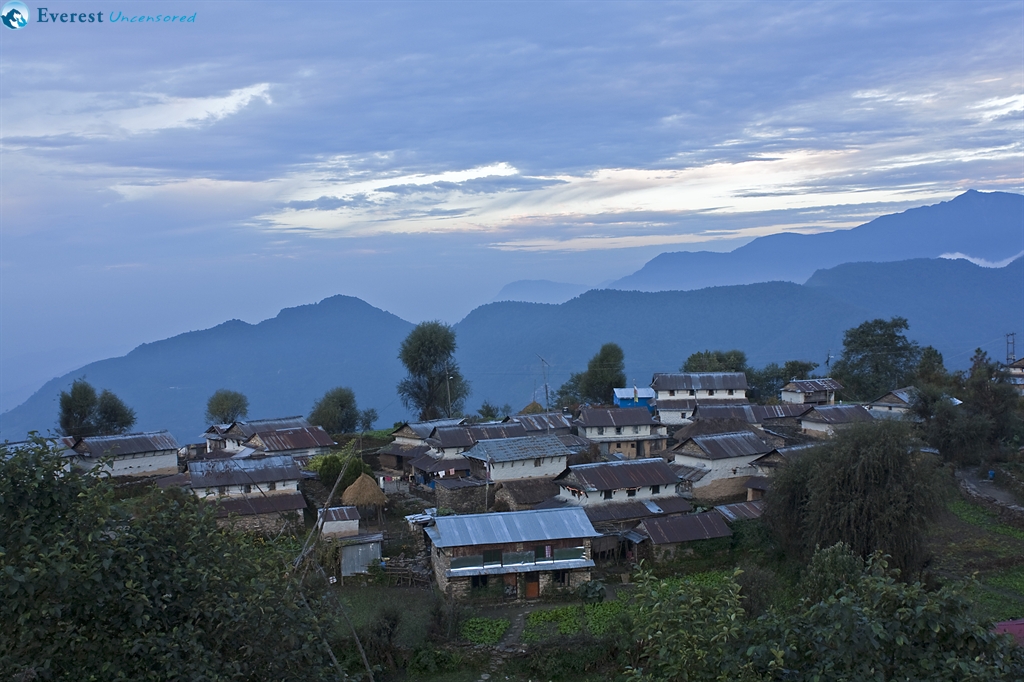 It was of November and the D2Hawkeye hiking crew was preparing for another adventure. The night was very cool and deep and the weather was ideal for the trip. Boys were ready to go after dinner at Lion Heart restaurant, Putalisadak. Bags were heavy, packed with warm clothes. Our journey started at 10 pm from D2 premises. We, inside the van, were enjoying- singing, making jokes, wandering our eyes around, and some still were taking a nap. It was progressing with the folk song “Balla paryo Nirmaya makuri jalaima” in a loud voice inside our van. Very soon we reached Thankot check post. We heard the road was blocked for 6 hours. Jay and Prajwol convinced the police officer for the entry.

We got off at 12 in Malekhu for fish. Upon departure from Malekhu, we were driven to Beshi Sahar, which served as both our tea spot and the starting point of our hike. The first part of our trip included one hour of continuous walk from Beshi Sahar to Baglungpani, where we stopped to buy the oranges. We had never eaten such sweet oranges. The climb was fun, but tiring; by the end of it, we were delighted to see a flat path ahead. For few minutes we walked in the clear road. Every where people were working in the field with bull to separate rice from its plant called “daie garne” in Nepali. We were excited about the high hill climb. We asked some of the villagers for the entry point of the hill what we called “shortcut”. Soon the shortcut path began from Pipalbot. We thought it was a short distance hill as people said it needs 45 minutes to complete. After 45 minutes of walk, we felt another 45 minutes needed to cross the hill. Finally we reached the top. We were very much tired. From the top, it was the first view we had of the Himalayas, stretching from Annapurna to Dhaulagiri. We stopped here for some noodles and have some photograph of panoramic Mountain View.

It was not the end. Still we had to cross the Kapur Gaun for the destination. We left our second stop and moved towards Kapur Gaun. After a 15 minute walk, we saw a beautiful school built by British Gurkha Army from UK. The view of mountain was awesome from this place. The magnificent view of the Himalayas was heart touching. After taking rest for few minutes, we moved towards Kapur Gaun. We reached Kapur Gaun at around 1 PM. It was a tiny village in the middle of nowhere. The weather was extremely different from Beshi Sahar. We experienced a different kind of cold nearly like that of Himalayas. We felt like we were leaving the mountain and entering the Himalayas. It was already 5 hours of walk. We did not miss any person passing by us asking about the time to reach Ghale Gaun. Every person answered that it takes nearly half an hour. It was so amazing every time we passed by 1 hour of walk and still they say “just half an hour”. Their 30 minutes was like three hours for us. At that time there was only a single hill ahead of us, must be Ghale Gaun. We were sure as there was no other hill in front of it. We took a long breath and rested at Pipalbot for some time. We were walking through the jungle. The way was paved with stone. We walked on and on, thirteen of us, miles away from the city, along the treacherous rocky path surrounded by magnificently green forest trees with the pleasant sound of the soothing breeze occasionally broken by intoxicating laughter or the soft whistle of a singing bird. It was like walking in a day dream – the dry fallen leaves against the green grass, the rhododendron laden hillside against the reddish glow of the setting sun and the crude rocky stairway that just kept winding on and on and on. Finally, after one more hour of walk we managed to reach our destination – Ghale Gaun.

Upon seeing the tourist sign board the hikers let out a victorious smile and said “Yes we got it”. The village was so cool and lonely. We felt like we explored a new village in the lap of mountain. We were so hungry. We rushed in one of the home for food. The people of Ghale Gaun were very affectionate and cordial. They greeted us with a warm and friendly attitude. Their respect and smile was adding taste in the food. The food was so delicious. The weather was so dynamic that it was changing its face in every few moments .Very soon it was sunny and after few minutes, fog surrounded the whole village. We had ever experienced such a unique climate before. It was time to visit the village. We visited the local temple, Tea garden and School. The night was getting dark. We returned to home. At night, we literally requested the owner of the house for the dinner. They treated us with great respect. We were totally amazed by their hospitality. We ate together at 10 Pm in a classic Nepali kitchen, sitting on the floor with the cooking fire burning in one corner. We talked to the women of the house and they informed us about the places that we could visit the next morning. We were stunned at how loving and caring the people of Ghale Gaun were. For the first time we tasted a new Nepali local drink named “Jhawai Khatte” , which was so delicious, it’s hard to explain.

The next morning we awoke amidst a picturesque surrounding. The beautiful village of Ghale Gaun bathed in the pale morning sunlight. Besides the scenic extravaganza of the peaks, the warm and sincere hospitality of the Gurung people overwhelmed us. The life-style of the village truly reflecting an exotic living ethnic tradition handed down since ages. The sweet taste of the cold hill-water and the local tea served early in the morning made it even more refreshing. It was like being in a different world and yet it was our own world and our own people. Every person we met there was kind and helpful and spoke to us with respect and honesty. We received the blessings of the elderly women who put Tika on our foreheads and flowers on our ears and bid us farewell. We took some photos of early sun rise from there. The sun rays striking the Annapurna and Machhapuchhre were fabulous.

Finally, we returned towards Beshi Sahar at 7:30 AM in the morning in bus. After having lunch at Beshi Sahar, we returned to Kathmandu. All in all, the hike was a great experience for us. We had great stories to tell and wonderful experiences to share. All of us were really pleased and felt better for having made the effort. We hope there will be many more hikes and much more fun!

6 thoughts on “Hiking from Besisahar to Ghale Gaun”