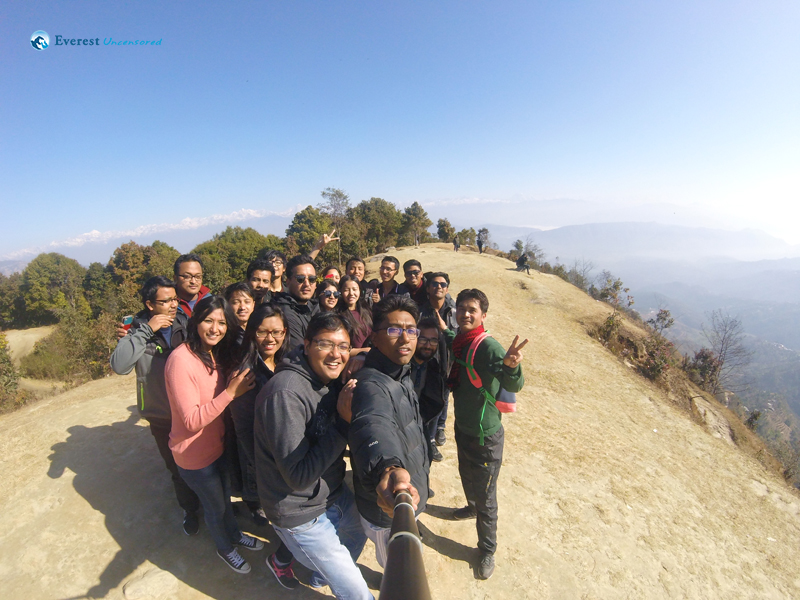 It was my first outing since I joined Deerwalk. I was heavily excited for the weekend as I was looking forward to a long-awaited two days of happiness and I did find it here. I came by the time we were supposed to be at the office for departure. I don’t remember until we reached our destination as I was all asleep.

I woke up with the noise of other passengers after we reached the resort we would be spending our time at.

The first thing that made me mesmerized was the view of the mountains and the hills from the resort.

The first thing that made me mesmerized was the view of the mountains and the hills from the resort. First day and we all were looking forward to what the co-coordinators had arranged for us for the evening. Both the team building games were quite fun and interested of which our team won one. Then there was a session “Get drunk and dance”, I am not quite interested in dancing so I just enjoyed getting drunk with people that time. Later, the “Live Music” event was quite fascinating to listen and sing together with everyone. The night just went by.

The next morning we had hike to “1000 steps” and I can say you that I was being very much nostalgic since I took the first step out of the approximately 1000 steps that takes you to heaven I will be explaining in a while. I had been through these steps quite-a-few times already. The view of the mountains and the hills again was superb than that we could see from our resort. This spot was near to the horizon which made me feel like heaven and also more-a-bit of nostalgia. The mountains looked more clear and near.

The grass was not greener but with friends surrounded, it was a day of fascination.

To be honest, I had low expectations for the outing with my squad. The outing was to be in a resort in Dhulikhel, which didn’t feel like an outing at all. But the outing was surprising a lot of fun. The resort was inviting and had a beautiful view of the mountains nearby. Despite being a bit colder than Kathmandu, Dhulikhel was an awesome place. After I returned, I wished I could have more time with my colleagues. The resort was a little way away from the city and was quiet with only a few people when we arrived. It was quite the ideal location for an outing in Dhulikhel in my opinion.

We played a few games in the evening we arrived. They were fun and inclusive, which I liked. We played a relay version of cup stacking where teams played to be the fastest at stacking cups and unstacking them. We also played a relay version of tic-tac-toe, where teams played to win the game by placing and repositioning cups. Everyone enjoyed themselves throughout the evening. People were singing, dancing and drinking. Sujesh dai made that moment wonderful with his singing. Though I didn’t know many of them, I enjoyed the vibe of that evening. There was a fire in a corner of the room, making us all warm and sleepy.

The next day, we took a walk along a long and winding flight of stairs to a popular destination for visitors. The morning was cool and bracing for a walk. When we arrived, there was a tall view tower with a spectacular view of the mountains and a small hill with a huge rock jutting out at an angle. The rock turned out to be a haven for photography with people taking pictures on top of the rock. The sky was cloudless and a few eagles could be spotted soaring high above the ground making intricate turns. Their flight was actually really mesmerizing. After about an hour of sightseeing and picture-taking, we returned to the resort and prepared to leave.

Lastly, if I had to describe the experience in three words, I would say fun, memorable, and refreshing.