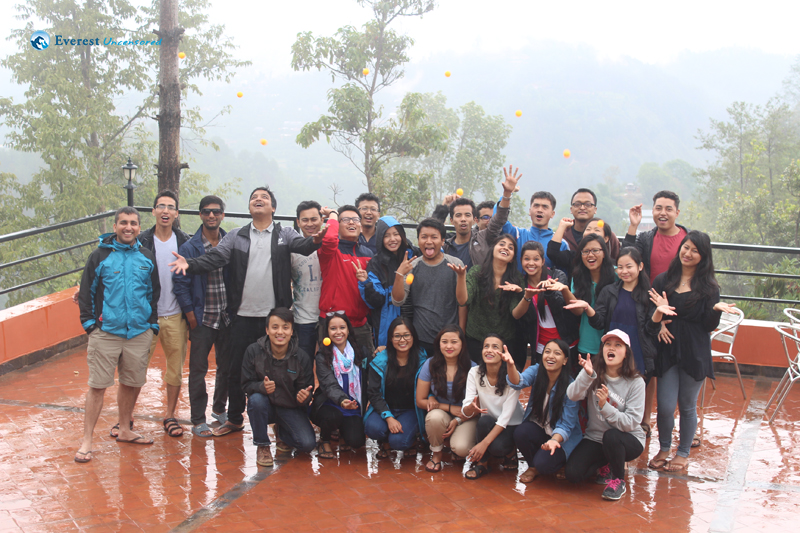 Khusbu Basnet
A short journey that was expected to be memorable, which indeed was memorable, was planned accordingly. From drinks and destination to team building games, all were discussed and set a week earlier. On a rainy Saturday morning at around 11:30am we began our journey from Deerwalk premises. A small pause at Sanga due to traffic jam called for fun and that’s when the actual journey started. With friends singing and dancing along with the tune inside bus, there was nothing more I could have asked for. All the happy faces with their jolly good mood and Suresh Dai’s cute little daughters, was a rare scene to have been captured all at once.

Few dump trucks encountered on the single lane road between Panauti and Knopasi Bazar (hike start point) made our journey a little sluggish but overall, it was great. Some of our friends decided not to walk who were then volunteered by a jeep to the resort while the rest of us hiked down the river, up the hill.

We stopped to take pictures at many beautiful places, pine forest, suspension bridges and many more.

We stopped to take pictures at many beautiful places, pine forest, suspension bridges and many more. Rain showed no mercy on us hikers as it poured again while we were still on our way. After around an hour of hike through the sun and rain we reached our destination, Balthali Mountain Resort, where we were given a warm welcome by their staff and friends who had reached earlier by jeep.

The dawn brought more fun and craze along with it which continued till midnight. Shortly after having snacks, four teams with 6 members each (all except the coordinators) were formed and we played two team building games. Games wouldn’t have been so interesting had there not been two cheating teams lead by Pratik dai and Suraj dai which also forced us to change the game rules. Then we had a combined birthday celebration of Barsha di, Umesh dai and Suresh dai with sweet cake and chocolates and presents.

All of us had our heart set on dancing and singing so we danced our heart out. We also had a few shots with barbecue before being served a gratifying dinner. Most awaited event “Shishir Jam Session” then began, accompanied by Prakrit dai and we all sang along with their tune with constant shout outs for a ONCE MORE.

Sunday morning we freshened up, had our breakfast and played the remaining team building games. After a few moments of selfies and group photos followed by lunch, we ran out time and hit the road. Thanks to Sishir and Madhukar who plucked delicious aiselus (Golden Himalayan raspberries) from the thorny plants and offered us on our way back to Kathmandu.

“Work hard, Party Harder”.
The day for our much awaited outing to Balthali had finally come. Since the route to our destination was on my way home, I caught the bus from Thimi bus stop. It was raining outside and to our worry; we knew that we need to have a short hike to reach our destination. After an hour travel passing through all the hurdles on the narrow and busy roads and singing and dancing, we reached Khopasi, the place to start our hike. Some of our colleagues took transportation service provided by the resort while most of us went for hike. With the stopped rain and cool weather, we started our hike through uneven, slippery hill ways. We all enjoyed going through the suspension bridges on the way with several camera clicks. Near to resort, we were welcomed by a light rain shower.

Umesh dai and I were the first one to reach the resort. Once in the resort, we asked for our colleagues, but within a second I was surprised when I found that the resort, we entered was not the one which we were supposed to be. We asked for the way to our resort and began to move on again.
We were greeted with soft drinks, in the resort and afterwards we moved on to the rooms. After a short while, we were called for snacks.

It was refreshing to look at the beauty of nature just after rain with a little bit of sunrays piercing through the light clouds with delicious snacks by side.
And the fun began with the team building games on the way. We were divided into four teams with six members in each. My team lost the first game, but the enjoyment was best. Tricks and wrong moves made by Suraj dai, Pratik dai, Suresh dai were fun to watch. Biscuit eating game was such a fun that I could not stop laughing at myself seeing the funny faces I made and so was with other participants.

Enjoying the birthday cake and wishing birthday to Barsha, Suresh dai and Umesh dai, we moved on to the jam session along with BBQ on side. Most of us were making “Thumkas” with the every beat playing and were having BBQ alongside beer. “Rammiya Vastaivayia” move by Pratik dai was awesome.
Most of the ladies were not having even a beer, but when I opened the Tequila bottle, everybody was amazed to see the ladies make tequila shots one by one. Nearly at 9 PM we had our dinner and after that we had live musical session by Mr. Shishr Rai and friends. Enjoying the melodious music with whiskey on hand was quite a time. With the night making way through and beer bottles showing effect, “antakshari” became much more fun and interesting.
After midnight we went to our room to have a nap but still some of us were eagerly waiting for the Champions League finals on TV. The next day we had breakfast at around 8:30 AM. After team building games we had our lunch and started packing.

Again, through the ups and downs with slippery hill roads we returned to the place where our bus was stationed. On the way back, we enjoyed “aiselu” (Yellow Berries) and team snaps. It was almost 3 in the noon when we started our bus trip back home. With all the enjoyment made earlier and hike made most of us asleep in bus. Summing up, our outing was awesome with Mother Nature by our side, making rain stop as we walk and cool weather.

Pratik_Joshi
I have never been a good writer and/or speaker. However, the coordinator of the outing event made me realize that I need to challenge myself and here I am writing an article about our outing even to the Balthali Mountain Resort.

I couldn’t think of a better way to enjoy my weekend than going out with the team to a location that consist of an excellent resort, breathtaking views, and good food. I have been looking forward to going out with the team for quite some time and this was a perfect opportunity to get away from the daily routine, hit the road, and have fun. The destination was around 2 hours from Kathmandu that included a 45 minute hike. The trip was made more colorful when 2 little friends of ours decided to join us. They were the daughters of Suresh dai. The road to the resort was a little bumpy, but that didn’t deter us from singing and dancing in the bus. Everyone was in a very positive mood and everyone had decided that regardless of the situation we would enjoy. We had to hike for around 45 minutes from Panauti to the resort. It was just another opportunity for us to take pictures on a different location. Taking a group photo in a suspension bridge. Light drizzle every now and then made it even more fun and challenging.

The resort was located on top of a hill which made our stay very exciting. The service was brilliant. We started our team building games.

I had so much fun poking fun at our opponent especially SurajP during the game.

I had so much fun poking fun at our opponent, especially SurajP during the game. It was a surprise for me as coincidentally, it was the birthday of Suresh dai, Barsha, and Umesh dai. The birthday people were given gifts and the cake tasted fantastic. With smiles everywhere we ended the day with a fun filled party. We danced and we sang till wee hours and went to sleep. The next day was equally fun. We woke up and ate our breakfast. Our coordinators had planned team building games for the next day, which was a very pleasant surprise. We ate our lunch and it was time to leave. Few chose to ride the car till Panauti where our bus was waiting for us. It was just another reason for us to take picture.

It was a fantastic event and I am thankful to all the coordinators who had planned the event. I am looking forward to going out with the team again but with the same attitude that made this trip a memory that I shall cherish for the rest of my life.