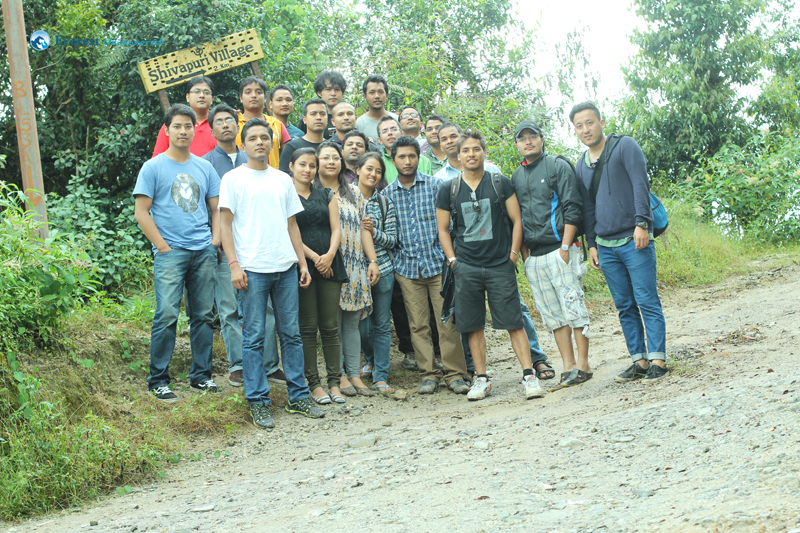 The outing was on Friday, and we had to return back on Saturday. So, we had to wrap up by 3 pm. We finished our work and were ready to set off by 3 pm. But due to the arrival of the organizers at the office a bit late from the market, we set off from the office only at 3:30 pm. We were enjoying the ride to the destination while cracking jokes and singing songs. On the way we reached the Shivapuri Wildlife Reserve check post where we had to stop while the check was going on, and again we continued with the enjoyment. We stopped by a curve 2 km away from the “Shivapuri Village”, took some pictures and resumed the ride. Our driver Mr. Deepak refused to go ahead as the road was narrow and for the fear of damaging the van, he dropped us on the way. We walked there on. We enjoyed the 1.5 km short hike watching the sceneries and chit chatting all along. At last we reached our destination at around 5:30 pm.

The location was a nice place with greenery everywhere and comfortable isolation. To buy the necessary items, the people had to go a long way. The huts were nice with the feeling of village life from the outside. The houses were coated with red mud and had a porch.

In the evening, we all had tea with biscuits and after an hour, the jam session ensued. Everybody was enjoying themselves sitting inside and outside. In the dance session everybody started to dance in any kind of music; be it sentimental, sad or Teej songs, with the current DJ, Prince Hamal. The main dancers were Sweta, Rachana, Liza and Rajesh. Also there was a rap battle between Prince and Ishwor. I felt sad that the pork we had brought had to be taken back to Deerwalk for some reason. So, what was left was the chicken stuff for BBQ. After dinner everybody went to their respective rooms and played cards. I felt fast asleep and don’t know what happened then on.

In the morning, I heard that they celebrated Rakshya’s b’day which I missed; although I got to eat the cake. I woke up early to enjoy the nice view of the mountains. Some had gone for a walk in the mountains and came with leeches stuck to their feet. Then after breakfast, we played some team building games such as spot the liar, cards, etc. After lunch, we started playing the “dumb charade” game which was fun trying to guess the movie names. After the game again we started the 2 km hike back to the highway in the drizzling rain. We were pushing Pratik’s bike up the muddy road along the way.

The outing was fun; I had a nice time with the members of the services A team. It is huge loss for them who missed the outing. I recommend all the team members to go on such outings.

The day was Friday. It was not just any ordinary Friday, it was the Deerwalk Services Outing day. Upon much request from our team the company countenanced our plan to leave on Friday evening. We wrapped up our tasks by 3 pm and were ready to go. We reached the destination about 5 pm. In order to reach Shivapuri Village Resort we had to walk a bit. We all persevered and reached the opulent resort on foot. We got to our rooms, freshen up and joined for snacks afterwards. In the meantime, we chaffed around while some of our friends were engaged in badinage. Time passed and after having some drinks the simple dining room was revamped into a commodious dining room. We all danced and talked all evening. After having dinner some continued on dancing and some went on to play cards. Though the outing got us weary at the end, there is a sense of renewed energy within us that is going to keep us afresh, both in mind and body, for a long time to come.

Thinking about 27th and 28th September 2013, a lot of fond memories must have been engraved in each of the 27 members of DW services team. The Shivapuri Village Resort proved to be a perfect destination for team building activity. With the serene beauty it had to offer, every one of us was mesmerized for having to be in such a heavenly beautiful place; while the ambience made us feel as if we were one of the villagers living in the vintage mud houses. Words aren’t enough to explain the tranquility of the environment.

We left the DW premises at around 3:30 in the evening and reached our blissful destination by 5. Our journey, of course was accompanied by singing and cracking of jokes, basically enjoying the good company we had. Since, everyone was hungry by then and the tea and cookies which were offered were finished in no time. Then as the evening was upon us, food, drinks and music were the way of entertainment for the members.

“Dumb Charades” game was quite fun to play for getting chance to see everyone’s acting skills and it kept us up till 1:30 am in the morning. It was also the birthday of one of the members and celebrating the occasion gifts were exchanged, cake was cut, and the rest of the members had it as a desert. The following morning was a day to look forward to, away from the dusty environment of Kathmandu valley, the beautiful scenery provided absolute solace to our eyesight making everyone and everything look pious and pretty. Then again with heavy breakfast and awesome lunch our outing came to an end, just like every good thing does. Sadly we had to leave the place and get to our van which was another 30 min walk.