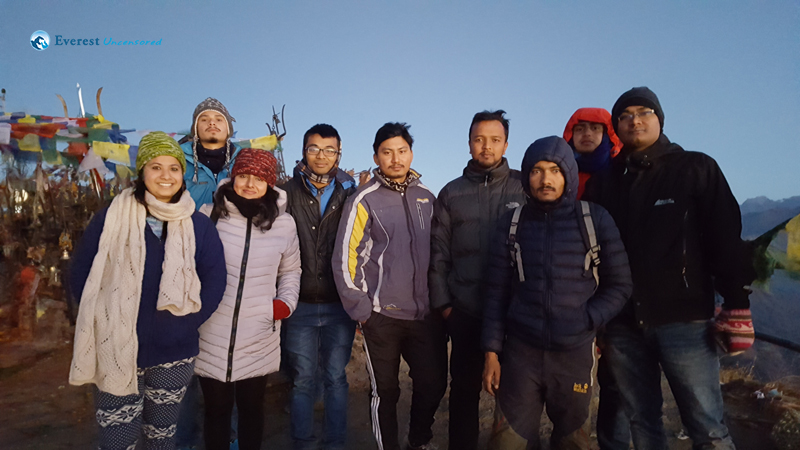 Reaching at an altitude of 3800m in two days was not an easy hike for us. So, better not be late in commencing if you want to have the pleasure of viewing all the scenic beauty of Kalinchowk. 2016 Nov 26th started with an alarm beep at 4 am in the morning. As we were supposed to reach 190km’s far from Kathmandu valley through Bardibas-Sindhuli Highway to Charikot and then to Kuri. Most of us gathered at office premises and our van proceed at 6:30 am where rest of the 3/4 hiker’s were picked on the way.

All of us were extremely excited about this hike to Kalinchwok as we have heard the place to be mesmerizing in the amidst of mountains. Passing by Bhaktapur was easy in the morning blessed with a striking view of sunrise. Our habit of sleeping late in the morning never allowed us to view the sunrise. The sun was red and shiny; wow. At a point when we had dropped all the beautiful thoughts from the surrounding views, music and chit chats inside the van. We have already reached Dhulikhel at 8am, where we had our breakfast tea, few roti’s and curry. Best thing about breakfast, it was cheap for 14 people. From Dhulikhel deep down the Bardibas-Sindhuli highway. The road is absolutely smooth not even a single joints and fosse. We stopped our van at Selfie Danda and Rato Mate. There is a story why this place is called so. Most of the travelers stop at this point to take selfie’s because one can capture the terrace looking clean smooth roads with Sunkoshi river in the background. Rato Mate gave me a small sign like that of plateaus I have seen in Mustang. We turn towards Ramechhap district from Khurkot bazar which was the junction point for Tamakoshi and Sunkoshi river. On the way we saw Khimti hydropower. After traveling for approx 3 and half hours from Dhulikhel, we had our lunch at Khimti. Fish fry and curry was delicious though a little spicy, however we loved that food in local hotel.

Around 2:30 pm we reached Charikot Bazar where we hired a four wheeler Jeep to ride to Kuri which was just 14 km away. The road was under construction with full of dust. Except four wheelers other van would not support that way. Adventure ride to Kuri begins at 2:45 pm. It requires a huge strength in arms to hold youself in the back of jeep. About half of the guys get off in the middle of the way to have pleasure of walking and viewing the surrounding Gaurishankar mountains. In the nearby hills at Kuri we stopped our Jeep and walk up to beneath peak. The view I saw was spectacular. Coniferous forest surrounded by Gaurishankar mountain and in the middle there was a largely spreaded sea smoke. I have no words to expalin what it really looks like. All the white fogs in the middle. I have never seen heaven but if it is there then it should have look like Kalinchowk. At 5 pm we reached Kuri where we freshen up. I climbed a small hill nearby our hotel to have a glance of sunset. Do you want to know what I see over there? The sea fogs felling down like a stream from one corner of the hills and the sun setting with a rim of sparking golden colors in the horizon. This fog which was pure white a little bit earlier now looks bluish in the sunset. In a very short time all the fogs were following me in the hills and I vanished myself inside it.
It was too cold outside, so we had locally made wine Tumba and had dinner at 8 pm and went to sleep because we were already tired. Next day we woke up at 4 am in the morning and climb up the hill to reach Kalinchowk Bhagwati which is Hindu Shrine temple in Dolakha district located at 3800 meter from sea level. It took us 1 hour to reach the temple. There is myth about this temple, once a person exits the temple premises shouldn’t return again.

Reason for walking so early was to watch the sunrise from the hill. It was the only day when I wake up before the sun. I see sun coming out from the womb to the horizon sparking golden colors to fog. After returning from temple at 8 am we have some breakfast and check out from hotel at a minimal fair stay. We came back to kathmandu from Charikot the other way which was from Mude about 134 kms far. Traveling the way we saw landslides on hills which took place during the 2015 april mega disastrous earthquake. Most of the houses were completelty distroyed and are still staying in temporary sheds. We found people of Dolakha region generous and helpful. I pray for their betterment and hope the Nepal government take the initiatives of reconstructing those broken houses and wounds at earliest.

There is a saying “In every walk with nature, one receives far more than he seeks”. I think hiking is all about walking with nature.

This was my first hike as Deerwalker. The hiking destination was one of the best hiking destinations of Nepal. I have already been to Kalinchowk two years ago during my college days. I was enamored with this place due to its majestic beauty. It seems as if this place is floating over the cloud that’s why I participated in this hike.

My journey to Kalinchowk started from Deerwalk complex at 6:30 am. We reached at Dhulikhel and had a light breakfast. We had confusion regarding the route to Charikot since road through Sindhupalchowk to Charikot is under construction. Therefore we decided to travel through Sindhuli-Bardibas route.

We travelled through most famous newly constructed road B.P. highway. This is fantastic road with beautiful scenery throughout the road on the bank of Sunkoshi river. After crossing Khurkot we travel down to steep passing the bank of Tamakoshi river. We reached tamakoshi and had most awaited lunch since all of us were hungry. Then after lunch we reached Charikot quite late than we have planned .It was late to start hike from Charikot so we hired four wheeler jeep to Deurali and started our hike from there. We walked through thick forest with thick fog. The climate there was mercurial. We can’t predict when it will become sunny or when it will become foggy. After a relentless effort we reached Kuri before sunset. The view was amazing .This was the great surprise for the one who is novice for this place. During my first hike to kalinchowk I missed sunset but this time I was able to view sunset beneath the floating cloud.

We stayed hotel at Kuri. Next day we started hike to the top of the Kalinchowk at 4.30 am so that we could view the sunrise from the top and we got that chance too. View from the top of Kalinchowk was superb which can’t be describe in few words. Just one need to reach there to embrace the beauty of Kalinchowk. One will feel as if there is no top when after reaching there. And we returned to Charikot and had lunch. And after that we returned back to Kathmandu making the moment unforgettable.