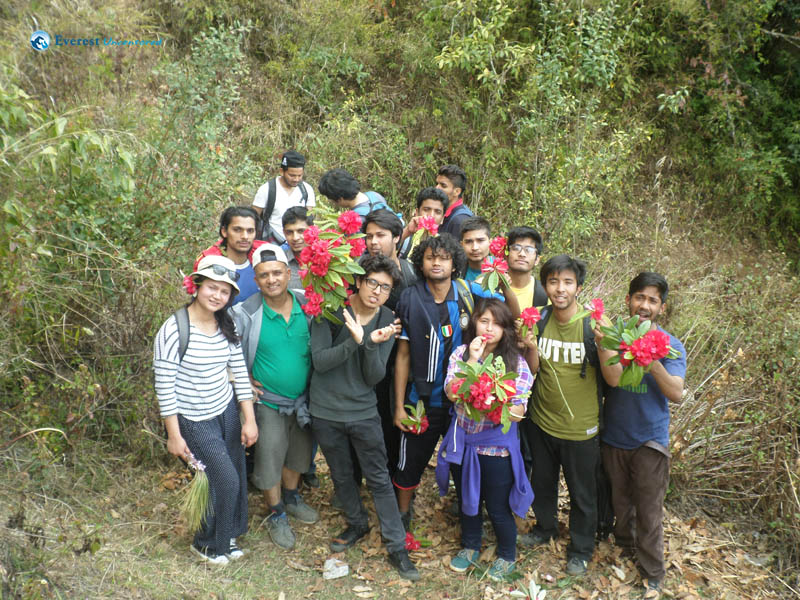 We met at college and started the journey around 7:15 AM. We were all excited. We cracked jokes and laughed in the bus. We stopped at Tuteoani, Satobato for breakfast and the journey continued. The original plan was to go up to Lele bus park by bus and then to walk, but due to the road block we had to start walking earlier.

After walking for some time, we reached Rhododendron-covered forest and everyone wanted some of it. Due to Rhododendron It seemed as if someone had poured red colors in the forest.

After walking for some time, we found ourselves in the middle of nowhere. Somehow we lost the way and ended up in the dangerous slippery forest. While climbing down many of us got some minor wounds and one hiker got injured badly and it was necessary to take him to hospital. Because of the his injury the plan of going to Godwari was cancelled and we went back to Lele. At the end, this hike became a Hike from Lele to Lele.
Finally, everyone dispersed after enjoying a delicious meal at ‘Thakali Bhancha Ghar’, Sinamangal.

On this day, Hiking club organized hike from Lele- Pathivara- Godavari. The main purpose of the hike was to see the Rhododendron (National Flower of Nepal). All together we were nineteen hikers. Mr. Abhisekh Khatiwada was the hiking coordinator and Campus Chief, Mr. Surendra Nath Adhikari joined the hike as the college representative.

We met at college and started our journey around 7:15 AM, in a micro bus. On the way, we had to pick up some hikers which we did and the journey continued. We cracked jokes and had fun on the bus. On Satdobato, we had our breakfast and went on to reach the destination. We had to go to Lele Park so that we could reach Pathivara in an hour, but due to the flat tire of a truck the road was blocked and we started our hiking from the very place. After walking about an hour, we arrived at the temple of Saraswoti in Lele. All the students worshiped Saraswoti and our Campus Chief, Mr. Adhikari gave a short description of the route.

Then, we headed to Godavari cracking some jokes. We climbed up the hill eating TWIX chocolate. After climbing up the hill, we arrived at Bista’s Farm. We were going to enter into the dense forest which was all red due to Rhododendron. After walking for a few minutes in the forest, we saw Rhododendron and took a break for some pictures. After a while, we sat for some snacks and continued our journey.

It was a history made by DWIT Hiking Club. Hiking from Lele – Lele.

Being the college representative, Mr. Surendra Nath Adhikari gave the guidance regarding the route. But he forgot the route and we were in the middle of the dense forest and didn’t know what to do. All the hiking members were tired and were resting in the forest. So, he decided to walk the dangerous slippery forest. And after the dangerous slip in the forest, we somehow figured out the way to get outside of the forest. Many of the students got some minor wounds while one student got injured badly and it was necessary to take him to the hospital. We came out of the dense forest and found that we reached Lele again.It was a history made by DWIT Hiking Club. Hiking from Lele – Lele. Then we went to Thakali Bhancha Ghar, Sinamangal and ate a delicious food.

One thought on “Rhododendron Hike”