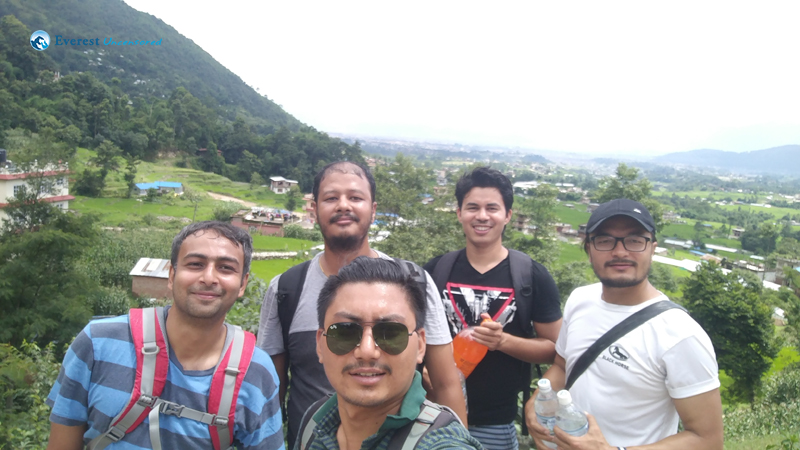 A cloudy monsoon day and we were off to the western flanks of Shivapuri hills for semi annual team outing. We took the tokha road out of the ring road and headed north past Grande Hospital en route to Shivapuri Village Resort. The road was muddy and the van was having a hard time going up the slopes so we left the van at a place called Phulbari and started walking.

The road was muddy and difficult to traverse even on foot. Slowly but surely we moved along staying well hydrated. Only huge tippers, big TATA buses and a few motorcycles were plying the road. After about a couple of hours walk, we reached the army outpost that signaled the territory of Shivapuri National Park. The road to Nuwakot ran along the edges of the National Park. After paying the dues, we entered the park area and moved through narrow jungle path when it started to rain. After awhile we came across the gate of the resort which appeared totally out of place in the wilderness.

Soon we came up on the resort which was beautifully placed among the wilderness. We rested a while in our rooms and freshened up before heading down for some light refreshment. After the resfreshments, we started exploring the area of the resort which spanned a whopping 200 acres. It was good to learn that the resort also had stand alone houses which could house atleast five or six person. From the viewpoint, we could make out Trishuli river in the west and snow capped mountains of Langtang and Ganesh range in the far distance.

As we were exploring the area, we saw a solitary rabbit jumping around in the grass. Vivek decided to go chase after the rabbit in a game of cops and thieves. After roaming around, we came to our rooms to discover that the outing funds that Vivek had in his purse was missing. We immediately ventured out again to search for his wallet but it had already gotten too dark. We were quite exhausted by the time we returned to our rooms with little success. We had our dinner early before retiring to our rooms and stayed up for a while before retiring.

Next day, we got up early to search for the missing wallet but to no avail. Then we went back to our rooms and rested for a while before breakfast.

After breakfast, we roamed around and discovered video evidence of the missing wallet.

After breakfast, we roamed around and discovered video evidence of the missing wallet. At the start of the video an ecstatic Vivek was going after the rabbit with a huge bulge in his right pocket. Towards the end, the bulge was missing.

It was time to leave and we somehow arranged for the funds and moved out. It was a long walk back from the resort as we had to walk atleast two and half hours to reach the van that was waiting for us. We got into the van and returned to Kathmandu. It was a memorable hike for all the participants.