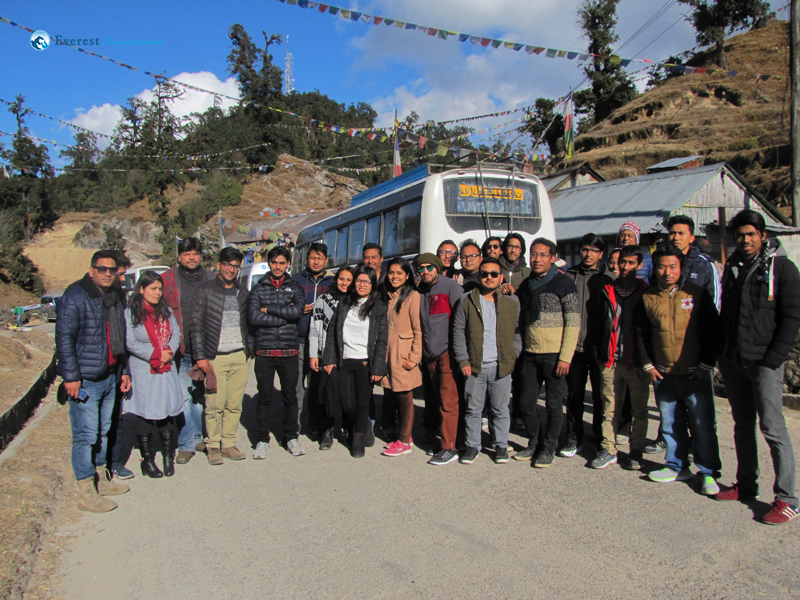 On January 7, Deerwalk Squad B co-coordinators organized outing to Daman.

The journey starts from Deerwalk complex. We were facilitated with a Bus and van and the journey started sharp at 8:30 am. There were total of 37 participants few gathered at deerwalk premises and few were picked up on the way. We crossed Thankot around 10:15 am. After reaching Naubise, we had our lunch and continued our journey again with full of energy.

After that, We reached Daman at around 3pm. The Everest Panorama Resort was a comfy and beautiful place. After freshening up, we started touring the place, taking pictures here and there followed by a tea break. The weather was very cold and freezing. We all gathered together and started playing Nepali style tic tac toe the game invented by our coordinators (Ayush dai and Nisha dd). Then, there were 2 more games lined up for us all.

a) Eating Biscuits without help of hands
b) Water PingPong
Both games were tough everyone enjoyed. Luckily our team won the first game.

We took some rest there. After rest, we played swing near the resort. Then came nightfall, which brought, drinks, barbecue, songs and a campfire with dance. We danced to the tunes of the Awanish Dai’s play list of awesome songs, then gathered round the fire for a sing along session.

The next day,we woke up early in the morning, had heavy breakfast. Then we all walked up to the main road, from the resort. It was again a great time finding a way to fresh and cold air on Sunday morning. We took awesome group pictures and selfie and got chance to know each other more closely. Around 10:30 am, we gathered and headed back to Kathmandu.

In this wild world, I had a very wonderful and memorable outing with my teammates which I will cherish for a lifetime.

In this wild world, I had a very wonderful and memorable outing with my teammates which I will cherish for a lifetime.

On 7th Jan, 2016 the Squad B team headed towards Daman for a two day outing. We gathered here at Deerwalk complex at 8:00 am and headed to pick up employees on the way to Kalanki. We got stuck by the jam at Thankot and reached Naubesi around 12:30 pm, where we had our first stop over for lunch over there. Then we moved through the hills.

This was my second outing from Deerwalk. The beautiful scenes of the nature was so amazing. In the mid of the hills on the way to Daman, we had some snacks and drinks. We started singing and dancing. We reached Simele at around 2:40 pm. We saw large group of people at the top of the hill beside the road. It was like there should be something interesting or beautiful scene that can be seen from the top. Shekhar dai and I decided to reach to the top and look around but there was nothing of interest except a stray dog sleeping. We came down the hill and starting walking towards our destination. Snow scattered could be seen besides the road. We reached resort at around 3:30 pm and had some snacks. It was too cold and air was same there. Some of our team members were already there trying to connect to the wifi and they were tired of the connectivity issues. When they saw us (IT Team), we could feel the smile on their faces. We realized their feelings and went quickly to the resort manager and instructed him to reboot wireless devices and router. After a while connectivity began and everyone was in happy mood.

After snacks we gathered for some team building games. Different teams were formed. We played for a while and since it was already began to darken, barbecue was ready. We had to do a bit of struggle to burn the wood over there. We started playing, singing, drinking and dancing. We had dinner at 8: 00 pm and singing and dancing continued till 10:00 pm, we stayed talking till 12:00 am and went for sleep.

The next morning, it was already 7:00 am by the time we woke up and we went outside the resort, walked up to Simele, taking photos. We had tea at Simele Bazar and returned back. All our mates were ready for the return trip. We left resort at around 10:30 and reached Naubesi for lunch. We were in Kathmandu at 4:00 pm.

It was a very memorable outing. Everyone was happy and I got to enjoy a lot.

3 thoughts on “RE/IT/PRODUCTION/DBA/OM OUTING to DAMAN”