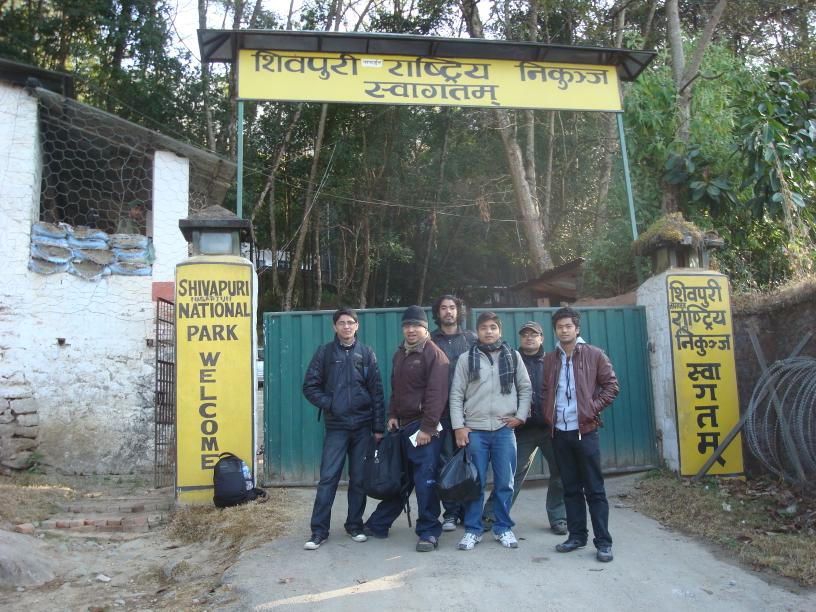 Jan 17, 2010 is the day that I would remember as the moment when we crossed our physical limits and showed that will power is stronger than anything else. Yes I am talking about the hiking to Chisapani, a long, adventurous and simultaneously pain staking and enjoyable journey. A remarkable assiduous effort of the deerwalk team which I am really proud of. Honestly speaking I am not much of a blogger, I don’t even have my own blog. But I kinda feel very much excited for this write up.

The thing was guys at the office were bored and tired of the tedious work that they had been doing all day long. All of us needed a break. Thanks to Anjan, he planned the whole thing. We were a group of 7 people(lucky seven I should say), myself Lakesh, Anjan, Raen dai, Nimesh, Swagat, Anil dai and Kanchan dai. We started our official hiking from Budhanilkantha right at 9:15 AM. We entered the premises of Shivapuri National Park after having a light diet, the same old Nepali khana, roti and aluko tarkari. We had to leave the handycam of Raen dai and Nimesh since we weren’t allowed to film inside the premises of Shivapuri. The guy at the ticket counter admonished us saying that the army officers could confiscate our cams. We didn’t want to take any risk, so we had to leave the cams at the counter. But agonizingly, we didn’t encounter a single army officer during the hiking. We were really missing the video logs which we had planned before (inspired from the great movie Avatar) because of that. However Raen dai’s mobile came to the rescue, and we were able to create our video logs for most of the milestones which we conquered. Now talking about the route which is the most important thing I should say, we chose the one from Budhanilkantha to Nagigumba followed by Baghdwar and finally Chisapani, our destination. I guess it was a total of 25 km. We reached Chisapani at around 4:15 pm the first day and it was really a sigh of relief when we reached the hotel there.

We had a brief session of football game with the local kids. Nimesh played outstandingly. He broke the record of the longest run for a monkey. Congrats to him 🙂 Swagat was lively as well. He was our savior, ready to pierce the leopard’s throat with his log of wood(lauro) in case we found any along the course. I don’t know luckily or unluckily we didn’t find any :). Anil dai was our bate or I should say stake for the trip. Obviously in case we encountered a lion or something he would go for Anil dai first. In the meantime the other guys could flee :). Certainly Anil dai would have been more than enough for satiating a lion’s hunger. Our Raen dai (Mr photogenic) was busy taking snapshots giving various poses. We also had a kind of camp fire at night with the local guys there followed by a brief discussion regarding the solar and wind energy that they were using to generate electricity. It was nice to hear the electricity status there from a tech person. The hotel was very much expensive though.

While returning we followed the downhills from Chisapani to Sundarijal. The comeback was more painful for all of us. We had to climb down millions of stairs and there was too much of pressure on the knees. It was very much difficult for Kanchan dai, however the knee band did give him some relief on the way back. Anyways we all made it back home safe and sound and that was the greatest thing for all of us. Now what we learned from this hiking? This might sound a bit of rambling but it comes straight from the bottom of my heart. To be honest, most of us were not in the best of conditions for the hiking. I and Anjan had some problems with our shin right from the start. I started limping from the very beginning and even I was almost sure that I would not be able to make it to Chisapani. But all of us had this great determination to reach our destination. Anil dai is a changed man now. After conquering this one, his confidence is boosted. He is now ready for any other hiking. He says just bring it on 🙂

Well I think I am done. Now let’s see what our guys have to say.

Swagat:
Our hiking from deerwalk to….in Jan 17, 2010. We were supposed to meet at Bus Park at 6:30 AM. But unfortunately, I got up from my bed at 6:30 AM. Then my preparation started in hassle. I caught a bus and finally reached bus part at 7:30 AM. Every busted me. Anyway, the way to go chisapani was decided by us as Ratnapark, Budhanilkantha, Mulpani, and Bagdwar then lastly had to get first day last target chisapani. So my experiences in that hiking were extra fun, relief, enjoyment, excitement, cool and so on anyway during the hiking I was confused about either I were in the paradise or in other but actually that was quite way to go chisapani.I played with the natural beauties like ice around the chisapani, the wood stick and took no. 1 photos as well as scenery that was visible achievement.