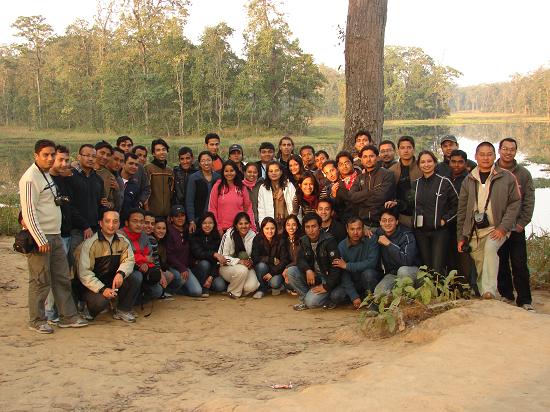 After much deliberation, it was decided that the QA department would be going out for an excursion to Sauraha for the team building party that had not been celebrated for 6 months already.
Far from the maddening crowd and the pubs and lounges, the trip to Sauraha was a retreat for most of the participants-jeep safari, bbq, singing, dancing, canoeing, cycling you name it and it was there.

The journey to the Tiger Camp:

The team gathered at the office premises to leave for Sauraha in two different means of transportation-a 40 seater bus and the office van. While most of the members were at the office on time, we had to wait for some of the others took their own time to reach the office.
The journey to Sauraha up to the “Tiger Camp” where we were to be stationed for the excursion was revelry on its own. The journey upto Blue Heaven where we stopped for breakfast was punctuated with occasional jokes and “antakshari” in the office van while the ones in the bus played guitar and sang to the tunes of the same. It was a chilly morning and the breakfast was just about everything that was required to pacify our growling stomachs. We continued with the “antakshari” session non-stop up to the “Tiger Camp” .We dubbed the songs that Surendra dai and Rashmi di sang -songs most of us had never heard before as “download.com”. Some of us were actually shouting on top of our voices instead of singing.
The Jungle Safari:

When we reached the Tiger camp at 1 PM after almost 5 hours, we were already late for the elephant safari. Hence, we had to resort to jungle safari on jeeps after lunch. Segregated in groups in some 6 jeeps we left for the “Bis Hajari Taal”. The sight of the “Bis Hajari Taal” was mesmerizing- like one of those post-card sceneries. All of us used the opportunity to pose for a group photograph. We were expecting rhinos and some of us were even expecting to spot tigers at the jungle but we had to resort to deer, birds and wild boar. Nevertheless, the jungle safari was a ride to remember.
The Eve:
The evening started with a bonfire and all of us gathered in a circle. The original plan was to play several games but because we were already lagging behind schedule we had to abandon the original plan. To make the evening colorful, there was a session where the new comers in the department (AashishA, SudeepG, RohanB, PratikJ, SanketS, ShilpaS,PallaviS, RupaM and  AmitA) had to perform. There were drinks and bbq being served in the mean time. While some of the new comers shared jokes, some played the guitar, some danced and some even imitated their mangers. To add more color to the evening there was the “Tequila shot” session followed by some singing and then there was the Tharu dance. Although there were no lights that evening the Tharus performed in open air under the lights of torches lit by their friends. The Tharu dance was unique and equally mesmerizing. They danced to the beat of the instrument and the only prop they had was a stick. After the Tharus were done with their performances, all of us decided to dance on our own in mid air to the tunes of the Tharu music. After the dance, we gradually retired into our respective rooms.

The next day was as eventful. After having breakfast most of us decided to go canoeing while some decided to go cycling. Canoeing in the light morning sun was refreshing and so was cycling for some of them. Ofcourse we had to wait for what seemed like eternity to get aboard canoe and some scared the awaiting passengers with their story of capsize. The ones who went cycling visited the elephant breeding camp and had their own story to tell.
After cycling and canoeing some us went for a stroll to the Sauraha bazaar area that was dubbed as  being “Thamel in Chitwan” by some of our friends.
The journey back home:

The journey back home was equally interesting. We decided not to stop at Narayanghat but to have lunch at Malekhu. The ones in the van were lucky because they got to stop for a while at Narayanghat for quick  snack including “taas”, “chatpate” and “badaam”. When we reached Malekhu at about 4 PM but there the two groups (the one in the van and the other in the bus) segregated for lunch. All of us were pretty happy to savor lunch late in the afternoon. Ram dai and SangeetaR gladly served lunch.
After the late afternoon lunch and some shopping at Malekhu, we headed back home. The journey back home was one of the most interesting parts of the entire trip. We initially started with “antkshari” again where SurendraA continued with his “downloaded” songs while AshayT surprised us with some real old songs –perhaps of our grandparents’ days. As we came close to Kalanki, antakshari took a different turn-different in the sense that most of us were already singing “The Bhajan” on top of our voices by then.
In short every event of the entire excursion was as colorful and memorable- in short a fantastic trip.

Recollections
BinitaV
I was one of the members of the “Sano Pariwar Sukhi Pariwar” in the office van as Surendra dai put it. We played non-stop antakshari throughout the way and sang songs from all the sources one could possibly think of.. infact only Surendra dai and few others were singing rest of us were shouting out loud… loud enough to give us sore throats for the rest of the day.
……………..Sitting on a dugout canoe swinging on the water was an experience that gave you goose bumps and fluttering dragon-flies in your stomach at the same time! After the heart throbbing excitement in canoeing few of us went for cycling on the leveled roads of Sauraha. I am an awful person when it comes to handling/ controlling objects in motion, yet I managed to ride the bicycle and it felt good 
We enjoyed our way back as much as we did on our journey to Sauraha. Surendra dai and Rashmi didi had a database of Nepali folk songs and they could sing it all from the beginning till the end… I have titles for them – Surendra dai the King and Rashmi didi the Princess of Nepali folk songs!

ShilpaS:
Team Building at Sauraha, was what everyone in the QA department was talking about. There were some people who were coordinating the tour and some who were simply excited. But I somehow was not as excited.But when I experienced the tour, I had a different opinion altogether. From singing in the van, posing for photographs along with other girls, dancing, making fun of people or simply laughing on silly jokes- I enjoyed all of those. I opened up with lots of people in the department with whom I never thought I would be so comfortable. I agree that a lot of things did not go as planned, but in the end, it is all about how much you can enjoy the present moment. And like all good things, this tour also came to an end, though I so wished that I could stay this way and enjoy the moment forever.

RajeshS/ ManishD/ SagarA/ AshayT/MamataO
The comeuppance of engineers from their Dilbertian cubicles – that is what our parties are. The Sauraha trip held promise of a different nature and the promise, for most of us was fulfilled. …………….
A “first timer” actually drank a full mug of beer in one go to show off his talent. And, to top it off Pramod dai demonstrated the proper lighting technique for, you know … The Tharu dance as the night tapered to an end and dinner thereafter were great. After this, we set off to our slumber, or the lack of it mostly, for the night was to be talked away, not slept into.
Boating on Rapti river in a chilly morning will always be cherished. Our first experience of rowing the boat was quite amusing. Kingfishers predating fishes was a thrilling view we could see from the boat.
Even though the camel  ride was a bit costly, it was worth it.The trip was for two days and I really wished it would have extended because being to Sauraha and not being able to ride on an elephant will always be an emptiness. The trip back home was great as well and PallaviS and ShilpaS, with their rendition of the bhajan was great. I loved the team building party and wait in anticipation, hoping to use this yardstick for the next one.
SanketS:
The elephant ride was cancelled and we had to satisfy with jeep ride. Lot of guys were hoping to see animals like tiger and hippopotamus but there we saw only peacock and deers. Though everyone enjoyed that ride.  Then we returned  to tiger camp and took some rest. After that everyone gathered around and formed a big circle. Then new employees were asked to perform something which reminded me of ragging sessions at college. However every new comer showed good sportsman spirit and gave their best. Hats off to them!!!.

04 ya its all blue out there

05 theres enough time for a picture

06 we can pose better than the girls

07 at the bank of trisuli

08 happy to be captured

10a getting the lunch pack tiger camp saurha

12 looking scared of going into the jungle

20 look at my reflection

21 can you figure out crocodile

22 did i see something extraordinary

28 we all are of same heighthoina ta

29 look i can replace rajmati

38 story lies in every place

39 beauty at its best

40 you capture us i will capture you all

46 manik has a jumpy feeling

53 world is all ours

55 this is our world

71 another pair of love birds