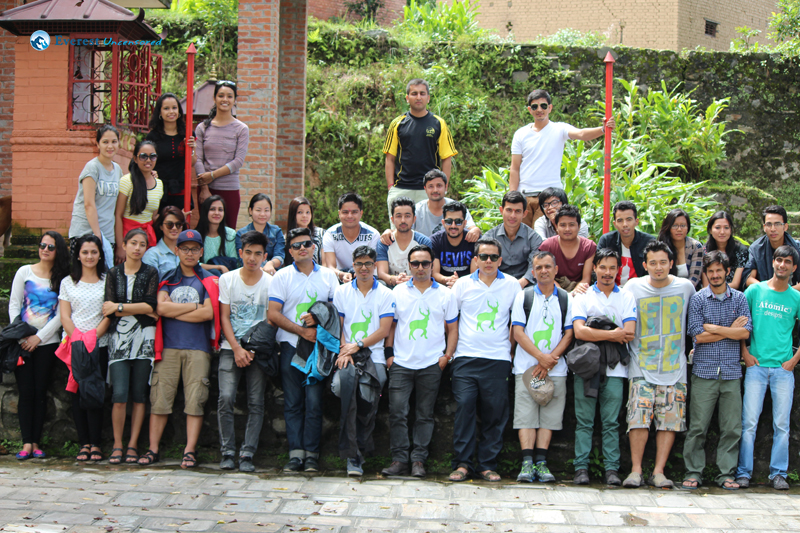 Hijas Shrestha
I had been hearing about office outing for quite a while and it made me wonder. I was curious, but had mixed feelings about how it might to turn out since the monsoon is notorious for spoiling plans.

As we neared Nagarkot, monsoon showed its color. We reached the destination, Hotel Heaven Hill, a few kilometers before Nagarkot, and outing began with delicious snacks, which became more delicious with the pouring rain. Soon monsoon turned gentle to us and we began with team building games. Games were as fun as it was difficult. And in no time, we were all dancing in the drizzle. By the time it was midnight, I was feeling euphoric. With all those jamming sessions, and barbeque, time just flew by.

Woke up around 7 hoping the sun would rise late for me but such was not the case, missed the sunrise. Since Nepal was declared bandha, we had plenty of time. Regretting how we missed the sunrise, I chugged in my bread and omelet. We decided to go for a short hike to a temple called Jalpa Devi before lunch. The location of the temple was beautiful. We had a group photo session, rested a while and walked back to the hotel. Was a little tired at the end of the hike but local pears and water were so refreshing, rejuvenated me at once. After hike everyone was hungry. Once we reached back, we had lunch, delicious again. Played and jammed a while again, which never gets boring. And before dusk, bandha had been called off and we returned back home cherished and bit tired.

As my first outing in Deerwalk, I got to see many new faces, and all new friends now. Nonetheless, I knew, bunch of energetic guys and girls together means definite fun time, and so was it – a fun time.

Arjun Bhatta
The most awaited outing from Deerwalk: I was excited from the very beginning for my first outing with the Deerwalk team. As planned, we all were set and was ready to have fun. One and half hour journey was passed in a glance due to drinks and songs all the way. We were there at about 3pm and I was feeling like we were welcome by the rain.

After light snacks the team building games were started. The team building games were of great fun. The first game was untackling the hand, i.e. a team had to unlock their hands (without leaving each other hand) in the shortest time.. The second one was much excited. Two teams were given a glass with a drink. The task was to drink it and flip the glass over and had to make a glass stand by using a finger. Team 2 was the winner. The prize was given to the winner.

Finally, it was the time for the most awaited BBQ and drinks. A separate BBQ for green lovers (I mean to say the veg) was also there to satisfy all of them. There was a light rain so we all were enjoying the rain dance. We also had a singing program followed by Kamal and Raghu dohori.

Our next morning started with a heavy breakfast .We all were set to go for a hiking. The climb to 300 steps towards the temple that was in the top made me feel I was not only the lazy and tired person among all till I met Prabhat who was having the same feel. The view from the top was really awesome. We took some photographs capturing the beauty of it. Some of us were roaming around, just to feel the chill of the weather. After lunch we were playing cards in different groups. We made the rule that whoever wins the card game had to sing or dance.

Travelling is always a fun. I think these events provide us break from the normal office routine. It is good culture that Deerwalk organizes such events, as these events strengthens bond between employees.It was a good experience. I like to thank for providing me a great opportunity to know my colleagues on a more personal level.