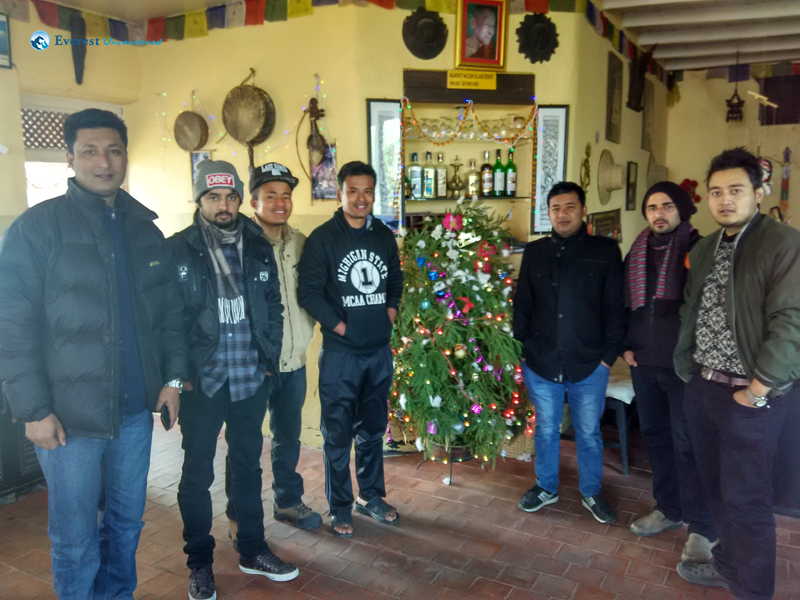 Hijas Shrestha
As I heard about Project Z team outing on the occasion of Christmas, I felt very delighted. I was eager to when this moment would arrive since it would be a very good chance to get along with the Project Z team, and also because Nagarkot never seems to disappoint.

So the ride departed from office on Friday afternoon towards Nagarkot after stopping by to shop for materials for outing. I was picked up on the way and thus, journey started listening songs and singing along on the ride. I was glad to see Ashish and Santosh and am very thankful to them for joining us. As they have been very helpful mentors to our team, we had invited them to be a part of this event. As we reached our destination, Naldum village resort, it was cold and the ride had made us dizzy. We were expecting to be cold since Nagarkot is a hill station and it’s winter, but the cold wind shivered us speechless. My hands were almost numb.

So we decided to start with hot snacks and coffee. Delicious snacks kicked off our outing. It was six on the clock by then. So we headed for Barbeque. As wood fire was being prepared for us, more delicious snacks – sausages and fries and chilly potatoes poured in. And to bid farewell to winter we started with whiskey. With whiskey and rum, and red bull and juices, and yummy chilly delicious snacks, we forgot the winter.

And as things were developing, we talked to each other, about experiences on Project Z and got along.

And as things were developing, we talked to each other, about experiences on Project Z and got along. We prepared barbeque. Chicken cooked delicious, didn’t know we were such good cooks. But we kind of murdered potatoes. They were burnt on the outside and raw on the inside. Well, there were delicious snacks pouring to compensate it though.

Soon there was guitar and songs being played. Sanjeev was a total surprise when he played guitar and sang. It completely astonished us and set the mood. In no time, we were all dancing and singing along the Nepali folk lore ‘Dohori’ tune and with our own lyrics. I would call it Nepali style Rap Battle. Everyone was getting creative and Nischal and Praveen were exceptional. It was such fun to be a part of it. Not sure, if it was the mood or the nature, but we didn’t feel much cold at night. Being accompanied by Ashish and Santosh made the night even special.

After spending great time, it was 8:30 and we all headed for dinner. We were already quite full with snacks and barbeque but dinner was so yum, we couldn’t stop. Dinner was set up in a Christmas theme. Balloons and jingle music were being played. There was a pine tree decorated for Christmas, which also wore “Merry Christmas” sign and small Santa replicas.

After dinner, Prajwal wasn’t feeling well and decided to sleep early. But we decided that we weren’t much sleepy and could sing more. And so back to the pavilion we went, by the wood fire, with a guitar and again few hours of musical night followed. And as we burned the last of our woods, we decided it was midnight. We wished each other merry Christmas and went to sleep.

Nagarkot is famous for beautiful sunrise. I woke up around seven and realized that I missed the sunrise this time too. But Prajwal and Santosh had woke up early to catch a glimpse of sunrise. They said it was wonderful. We had omelet, smoked potatoes, sausages and sandwich for breakfast. After tea and breakfast, hotel owner bid us farewell by playing Maadal – Nepali folk instrument, and singing Nepali songs.

The ride had arrived from Office and we departed back to office with those cheerful memories. Abhinayak was heavily missed. He wasn’t feeling well and couldn’t join us.

I am very thankful to our generous Project Z US team for such a wonderful Christmas treat. It helped us create bonding among us and would surely affect the Project Z team positively. Thank you Project Z, it really meant a lot to us.

Prajwal Khatiwada
It was already 3 months since I joined Deerwalk Inc. but this was my first outing after I had been here. The destination was Nagarkot and we reached there like about 5:00 pm. We arrived there a bit tired and hungry. We had some snacks and got around knowing the environment. Without messing around, we started to do what we were there for. We started pouring some drinks in glass and started our night off. Along with drinks, we shared BBQs, sang songs and had some random chitchat. The weather was chilly cold, but we had drinks and fire to keep ourselves warm. Sanjeev’s folk songs kept everyone’s cold in bay. We all danced and sang along as he sang. We had Christmas themed dinner after barbeque session, though we were already full. I was a bit unwell and called my eve off after dinner, but I could hear them still singing even from my bed.

The major attraction of Nagarkot has been the sunrise view which I got to witness again.The breakfast was amazing. We couldn’t miss to take photographs of what we had. The owner of the resort bade us goodbye by singing a couple of songs and soon we were off back destined to where we began.

It was fun to hang around with the team and I wish we get more often such good times as it was fun this time. The outing helped me know my team members outside the working environment. It was fun to spend time with them and get to know more about them personally apart from professional life.

Alas, thanks a lot our US team for the treat.