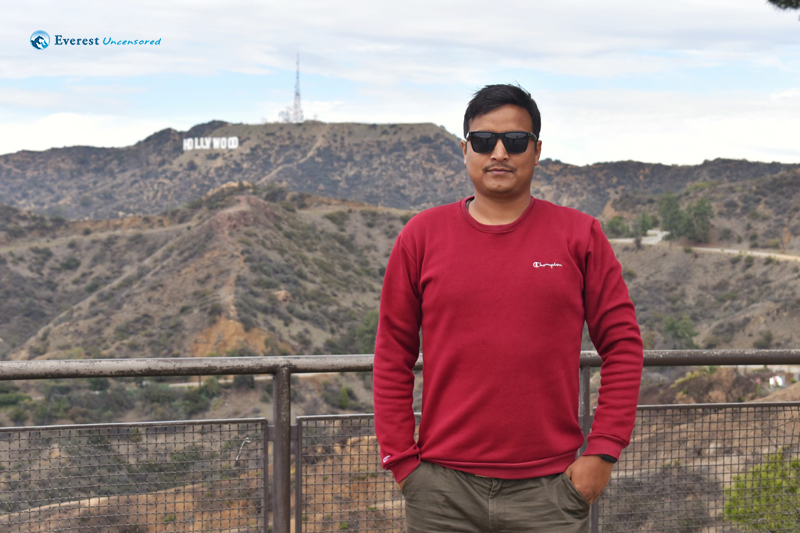 “Jobs fill your pocket, but adventures fill your soul.” as quoted by Jamie Lyn Beatty, My soul was overwhelmed when I was chosen for an official visit to the US. This was one of the most exciting and rewarding experiences of my life. On Nov 30, at around 12 in the noon, I departed from Tribhuvan International Airport for my most awaited journey to The United States of America. I enjoyed my flight on Qatar Airways with the amazing view of mountains and sea from up above the cloud where I managed to click a few pictures. After about five hours of flight, I landed at Hamad International Airport, Qatar.

I had a long transit in Qatar however the excitement to venture out a new place and a new country overruled it all. I was overwhelmed to be in a new place. I was taken to a hotel that the Airways had facilitated during the transit. Exploring the city was not much of a hassle since a transit visa was already issued to me from Nepal. It was a one time experience to be able to moving around a city by oneself, calling uber to drop me off to various sites where I was able to enjoy the evening, eat dinner in KFC at City Center, ride a boat at Corniche and look at the financial towers and parks that were located around. On the next day, I had an early morning flight to Boston. It was a long flight which was exciting but also thrilling due to turbulence since it was my first time flying to the overseas. Fortunately, I was given the window seat from where I was able to see the mesmerising view.

At around 2PM on Saturday, I landed at Boston Logan International Airport. It was winter and the temperature there was freezing. Sanjeev Dai was waiting for me with a welcoming smile at the airport and took me to his home. After having dinner there, we headed to Ashay dai’s home which was my home during my one month visit.

I reported to Deerwalk, Lexington office after the weekend. There were beautiful trees and ponds around the office premises. Abanish dai introduced me to the staffs in the US office. I was pleased to see so many familiar faces as well. They were all very welcoming. The meeting rooms were almost always occupied with client calls, meetings and presentations. We had standups every day at 9:40 AM. The ambience of the office was very good. It was a good opportunity for me to see how works were carried at the US.

I was lucky enough to be able to visit US at a jolly time when Christmas and New Year was coming around. The office celebrated Christmas by organizing a party which was held at a nearby restaurant. Also, the Mo:Mo party hosted by Bipul Dai and Suresh Dai was also very memorable.

During my one month stay, I managed to visit some other states of US as well on the weekends with the help of my friends. I visited some of the west coastal cities like San Jose, Oakland, San Francisco, Los Angeles and San Diego in California, where I met my old friends and my relatives. In San Francisco, the golden city, I visited Golden Gate Bridge, Palace Of Fine Arts, Ocean beach, Bay area, Silicon Valley Mountain Hills (Google Campus, Apple HQ and many more renowned offices) and Stanford University. I went to Twin Peak to see the view of San Francisco at night, and also went downtown where I strolled around in Pier 39. I also visited Financial District of San Francisco from where I saw the Salesforce Tower and Transamerica Pyramid. After that, I flew from San Francisco to Los Angeles. In LA, I visited Griffith Park and Observation center, Universal Studios, Hollywood walk of fame and Downtown LA where I got to see the view from top of Hotel Intercontinental and The Standard at Downtown LA where movies and videos are shot. My maternal uncle, Mahesh Chand drove us from Los Angeles to San Diego. It was about 4 hour long drive along the blue pacific ocean which was very soothing and calm. The weather there was clear and was similar to that of Nepal. Along the way, I met friendly strangers who are now friends with me. On a same weekend I was able to visit Las Vegas, the Sin city. I walked around the Strip area where I did not back out on taking shot around the Casinos.

I was booked the next weekend as well where I was able to visit Chicago. My friends Mukesh, Renu and Uttam welcomed me there. I walked around and visited the Navy Pier, Millennium Park, Cloud Gate, and saw city view from 103rd floor of the Sky Deck Willis Tower (Sears Tower).

I also travelled to New York alone from Boston by bus. With the help of Rajan Maharjan Dai and Shishir Rai, I was able to roam around NY pretty easily. It was fun walking on The High Line around Hudson River, Empire State Building, Charging Bull and rode a ferry to go to Staten Island and saw Statue of Liberty too closely. I also saw the 9/11 Memorial, The Oculus and The World Trade Center, Madam Tussana, Brooklyn Bridge and Central Park over there. There was a very heavy crowd in Manhattan specially at Times Square. It was fun there and I missed my home as there were many Nepalese around Jackson Heights and Queens.

Harvard square, MIT and Boston Downtown were the places that should not be missed to visit by any of Deerwalk visitors from Nepal. Sagar Dai, Saroj Dai and Kishor took me there on the last weekend. We went out from Newton Highlands to Boston Downtown on the Train. We also visited Quincy Market, Freedom Trail, Boston Common, Government Center, New England Holocaust Memorial, Faneuil Hall, Old City Hall and Boston Harborwalk.

My final destination in the US was Colorado. I had a return ticket to Nepal from Colorado with 5 more days (Thanks to Pramod Dai for this approval) to spend there. As planned, I went to Colorado and met my childhood friends Anil Budhathoki and Dhanraj DC. I was really excited to meet them after many years. I visited all the center of attractions on my stay there.

Overall, My visit to the US was worth remembering. This was one of the most memorable trip outside of my country. I was able to learn and try out various new things. It was fun to shop around, eat delicious foods, and meet my new as well as my old friends after so long. I would like to thank Ashay Dai for making my stay comfortable. I would also like to express my regards to the entire Deerwalk family of US who made my trip wonderful and memorable. I am forever grateful to Deerwalk Services to have provided me this opportunity which will help me grow personally as well as professionally.