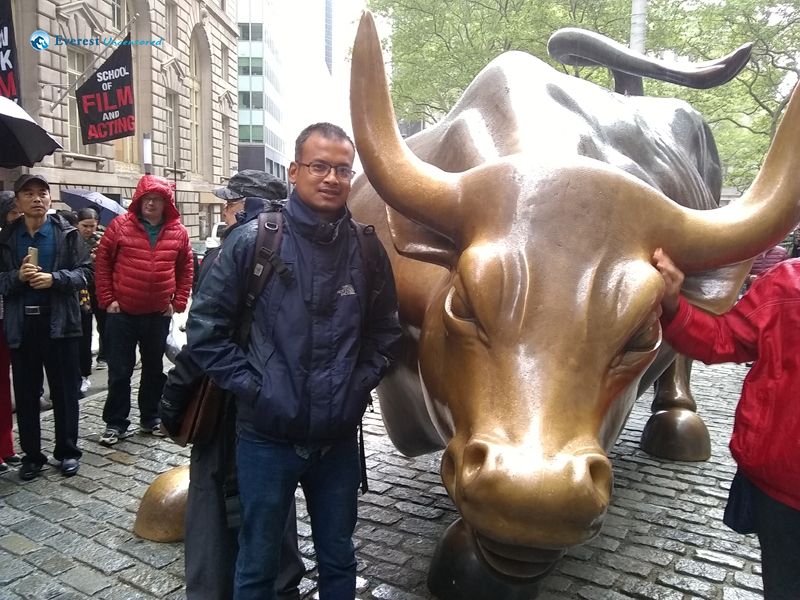 April 30 the day when I departed from Tribhuwan International Airport for my most awaited journey to US, never been outside of Nepal, this was the first time I was travelling this far and was thrilled, thinking of all the new experiences in the way and my US stay. More than 20 hours of flight plus 6 hours of transit finally came to end and I was there at the land of opportunities. My first sight to US was New York (JFK International Airport), from the New York sky, I could imagine the grandness of US. Another hour of flight and I was at Logan International Airport, Boston. As suggested by Abanish dai, took a cab and headed for Deerwalk Lexington Office.

A small personal meet with everyone in the office and was off to Bedford, Ashay dai’s home, 5 minutes away on drive, where I was going to stay for a month. He showed me around the house and made me familiar with the town and neighbourhood.

From the next day, I joined the US office, similar to what we have here at Nepal office, the day kicks off with the regular stand up session. Learning by observing the US team way of working and helping them out was what made my everyday at US office interesting. At weekend me and Romit, we would plan to visit new places.

Learning by observing the US team way of working and helping them out was what made my everyday at US office interesting.

The first thing in US that will draw attention for people coming from this part of the world is the clean streets and well managed commutation services. Boston, it is a big city and where I stayed was Suburbs but I never saw a single corner in either of the places where the garbage was dumped or left unclean. Greenery and lawns so well maintained. Speaking of commutation, very easy to take a ride. Get the transportation card (Charlie card) in the subway station and load the amount you want to in the card from the teller machine in the station. For a ride, it will cost around $2.75. The card would also work for travelling in the city bus within the Boston and places around. Google maps, the best travel app to follow when you are here. Schedule for the subway lines and bus routes are exactly and on time as specified in the app. Super Cool! Did not ever got lost 🙂 Uber can be another possible transportation means when you are in US, install the app, open your account, get the uber gift card from the nearest Caremark retail shop, load the amount, book the ride and enjoy, cheaper than cabs.

On the first weekend, went to Boston and looked around the city. Some of the famous places that we went around were Harvard Square, where the most prestigious university, Harvard University locates; Park Street, a big park for Boston people to hang around; Freedom trail, 4 km path through downtown Boston and following it covers the significant sites in Boston; Quincy Market, place where you would like to try local cuisines, famous for local market and foods. It was a nice experience being in the city.

Planning for weekend trip was never a trouble as everything could be booked online, expedia.com was the one that I preferred. Second weekend, planned for New York City Trip. Harlem, the place where we stayed while we were there. The same day we went to Times Square and late evening we returned to our hotel. Next day, we went for some of the famous landmarks in New York. But it rained that day, did impacted our journey but ya we can say that we had experienced New York Rain :). However, enjoyed being in the streets of New York; Brooklyn Bridge, 911 Memorial, Charging Bull were some of the places in the New York where we walked around.

Third weekend, I was excited from the beginning for this, yes, went to Vegas!. Just reached on time when the city lights in and lives up, it was 11 pm when we reached. We stayed at the south end of the Las Vegas Strip. Checked in hotel and took a walk to the Vegas strip. The city was way-too-happening. It’s the people, hotels, clubs, lights that set up the city mood and all that was happening nowhere but in the desert. At the first sight you won’t believe the city is located in the desert.

Next day, we went for The Linq High Roller, 30 minutes of a circle would get you most thrilling views of the city. The city hotels; few of them I enjoyed walking around were Bellagio, Caesars Palace, Cosmopolitan, Flamingo etc. Bellagio Fountains Water Show at night could never be forgotten.

On our stay to Vegas, we also planned to go for Hoover Dam trip. One of the example of human made grandest structure that stands still from 1936, an astounding feat of engineering. It was about 1-2 hours ride from Vegas. After reaching there, we had a tour class which was very informative, could relate those info while we were hiking around dam. Excellent view of dam and canyon from the bridge is an unforgettable sight.

By fourth weekend, my US trip was about to finish and I was busy shopping, packing bags, preparing to return home. My stay in US would have never been such wonderful without these wonderful people; thank you Abanish dai, Smriti didi, Sushant dai, Sagar dai, Kishor, Rebika didi, Manish, Bipul dai, Rosina didi, Ashay dai, Ekta bhauju, Sanjeev dai, Mukta didi, Ed, Rob. Thank you all. It was nice meeting with you all.