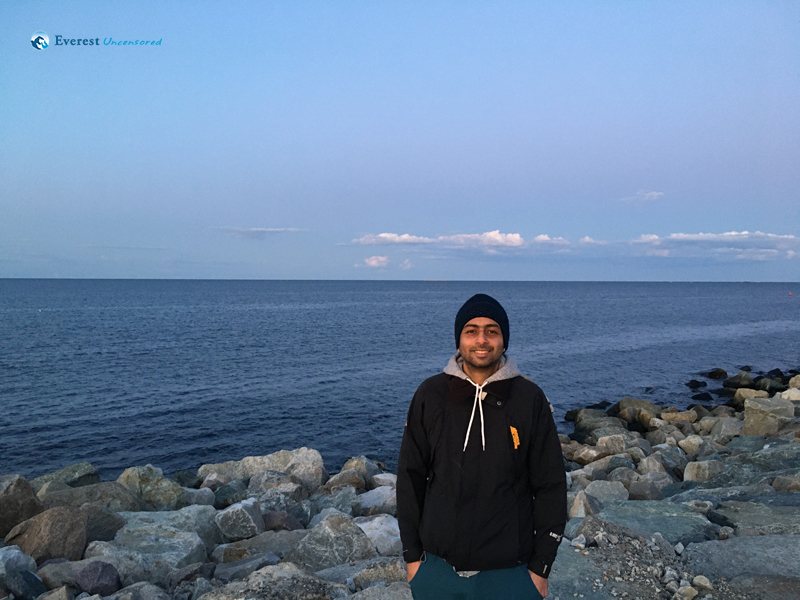 It had been more than ten years—and here I was again—in Boston at the start of wintertime. It was still warm and the air was fresh when I came out of the plane at the dead of the night in Dubai. As soon as I stepped out of the airport in Boston, I was caught off guard as a sudden gust of wind blew off the jacket I was carrying. I hailed a taxi in a hurry and sped off to the hotel. Soon, I discovered that the hotel was conveniently situated near grocery stores and shopping malls.

Vibrant colors of the fall were slowly fading to winter gray as we drove through Gloucester to Rockport beach one weekend. The sun was out and the weather was fine. We mingled into the crowd that had come to enjoy the waves. We hiked around Halibut Point State Park: an abandoned quarry that had later been turned into a park. I never missed the sea, but the beach and the seagulls made me recall distant days on the West Coast. I enjoyed the quaint little town of Rockport that had an avenue leading up to the harbor lined with shops that sold seafood, painting and other local wares.

Over the course of the next week, we were greeted by a polar vortex and the weather went from cold to windy to chilly, making the daily commute to the office difficult. It rained occasionally, and we had difficulty getting to the grocery store but we managed it somehow. A typical workday involved early breakfast at the hotel, getting to the office, working till the evening and then getting back home to cook rice, lentils, and vegetables. If there were any leftovers, we had them for breakfast the next morning. Overall, it was good to experience the workplace environment and meet colleagues in the US office.

One weekday, we went to watch Boston Celtics at TD Garden in downtown Boston. The stadium was huge and was jam-packed with a local crowd that wore familiar colors of white and green. Celtics won that match and everyone seemed joyous. Walking around downtown Boston was both entertaining and educational as we visited a lot of places of historical significance and wide-open parks.

Another week, I attended our high school gathering at one of the breweries in Cambridge. It was a great experience, sampling local ales and stout as well as catching up with old friends. We also mingled, shared our experiences, and interacted with college students of MIT, Harvard, and other local colleges. I also visited a few relatives who were living in Boston for the past few years during my month-long stay in the US.

During my stay, I couldn’t help but observe a few changes since my last visit to the US. The first was a marked increase in the amount of advertising in all forms of media. I was glad I am still living in a part of the world where we don’t have to endure long waits just to avail of free services. I also found that the majority of goods and services were cheaper and of better quality than the ones we find in Nepal.

In the end, I would like to thank Deerwalk for providing me with such a great and memorable opportunity.