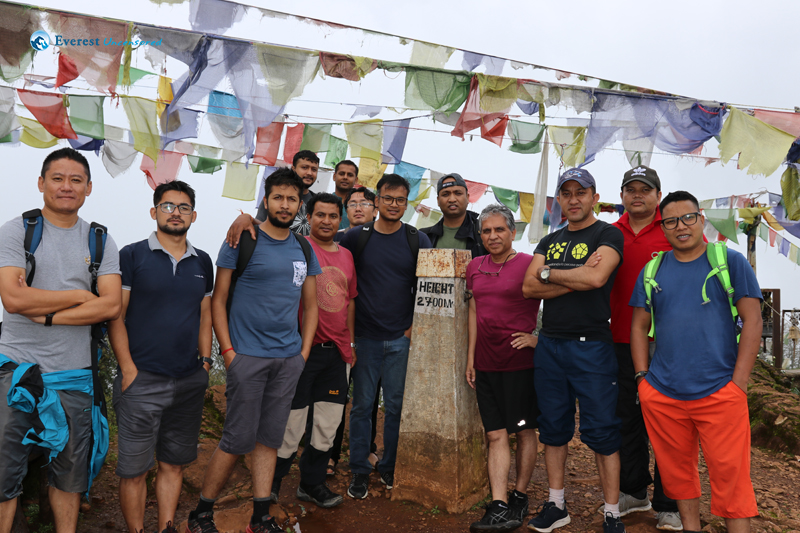 On Sunday, I reached the office at 6:45 AM. The plan was to go for a hike to Phulchowki. All the hike members were managers. The office van took us to Godawari. We had a heavy breakfast in a local motel. The van returned back after leaving us at the start point of hike route. We were just getting ready for walking when a heavy rainfall hit us. Most of us had an umbrella, so we walked even while it poured down. We were talking on a lot of topics. Leeches on the way relished the moment more. As Narendra dai was on sandals lots of leeches attacked him. After a short respite in the sky, another round of heavy rainfall hit us while going up to the temple. It took us about 4.5 hours to reach the destination. We had some snack items along with hot tea at the canteen of army barracks as we all were hungry. Then we spent some time at the top clicking photos and viewing the scene from there.

It was already 3 PM, hence we decided to return back. Praveen dai, Santosh dai and me were walking in the front. We were running rather than walking covering 1 km within 10 minutes. After walking downhill for about 7 KM, we were surprised to see the office van waiting for us. We waited for half an hour there till all the members reached the van. We drove to a restaurant in Hattiban. We were hungry as well as tired so we took snacks along with chilled beer. At around 8 PM we returned back to the office. As I was very tired, I took a shower and went to bed.