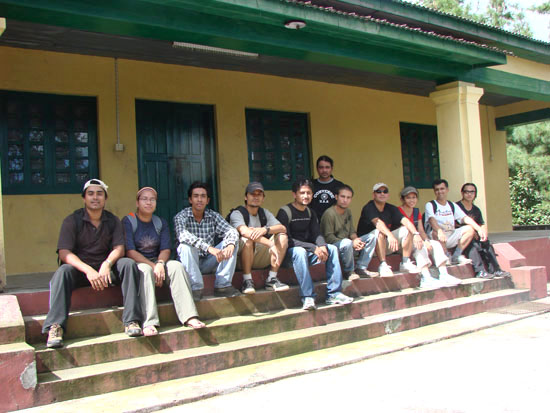 Participants: Surendra, Nishchal, Naresh, Kapil, Keshav, Prerana, Shiram, Vishnu, ManojR, Arjun and Shashi
Route: Palung to Daman
Date: Sunday, Oct 07, 2007
Duration: 2 hours 45 minutes
Trip Doom: 9-Kilo meters
Report: Prerana Pradhan
Photo: NishchalS
Creative Support: NishchalS
Never in my life before joining D2HS had I imagined that I would go on a hike. Would I be able to make it? This one question was bothering me for a couple of days. But then I really wanted to go and experience something which I had just seen in the posted photographs.

I was very excited about the whole thing. I reached D2 premises at 6:30 worrying very much that I was late. But it was only around 7:30 that we left the premises. I was completely new to most of the people in the squad. There were 10 of us and were joined by Surendra on the way to make a squad of 11. The journey in the vehicle was started by the discussion of the Friday night party and Amanat Ali’s superb performance in Sa Re Ga Ma Pa Challenge 2007 the earlier night. I was unfortunate to miss both of these, so I could not contribute.

The vehicle was cruising in the highway. We reached Naubise at around 9. After having our breakfast at a local shop we headed towards our destination. I was thoroughly enjoying the ride and the beautiful landscapes and the sight of the majestic mountains was making it more memorable. We stopped by to capture the natural beauty in our cameras. Then we continued our journey ahead. We reached Palung bazaar at about 10:30am. The hiking began after inquiring the local people about the route upwards to Daman from Palung.
The weather was perfect for the hike. We headed upwards through the narrow trails, and the not so easy paths that came along the way. The first rest came as a relief to me because I was finding it very hard. At that moment I even thought that hiking was not my cup of tea. I was very tired and exhausted. But the support of other hikers and the beautiful locals encouraged me to move ahead. We then moved ahead stopping at regular intervals for rest and photographs. I found it more adventurous and exciting as we were nearing the destination. We passed by the Horticulture Nursery center on the way to Daman. After the smooth walk on the highway we reached the local shop where we had our meal. After spending some relaxing time there we headed back to Kathmandu. The journey back in the vehicle was very long and tiring. We reached Kathmandu at about 7pm and parted our ways.
It was difficult but at the end of the day it was worth it. The mere satisfaction that I got to feel after the hike was awesome. The long ride, the beautiful landscapes, the majestic mountains, the surrounding greenery, the walk upwards, the snacks in between, the filling meal, the group photos and above all the enthusiasm of fellow hikers is simply unforgettable. The memories of my first hike will remain in my mind forever and I believe there will be many more in the future.

03 Two peaks and two trees on the top

05 Simply the plane and sky

07 Highly attractive and able to arouse desire to walk

08 A pause for relaxation

09 A bus in the middle of Palung market

11 Once i was nearly doing Orchid cultivation for exporting in this area but….

12 The condition makes us to go in veracious way

13 Some thought that was ok

14 Always tough has potencial for easyness

15 Is it mental object to risk!

16 The Valley called Gahate on Sept 17, 05 Rudra, Surendra, BhaskarB, Raju and Vishnu walked through to Kathmandu

19 All were thinking this is the last ascent

21 Just before beginning for second half

22 Khela of Keshav after few months of break

1. A Gumba runing by Bhutanese people

3. A nice castle but not much in use

4. Walking on the stair of the castle

5. Bed for their cattle

7. And dine, chicken curry was the best!

9. Nishchal and Kapil on the black bed

14. Leaving us for wondering ourselves

99 thoughts on “Hiking from Palung to Daman”