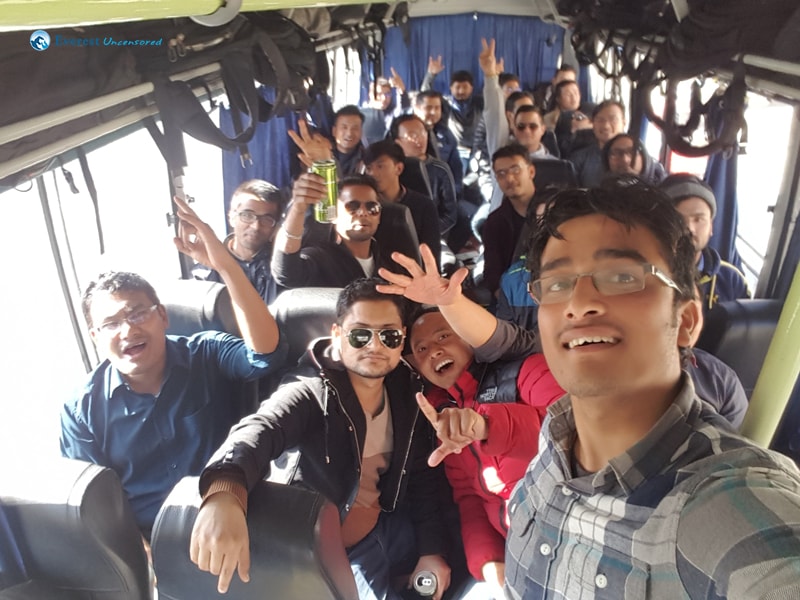 Anil LamaIt has already been a year I’ve joined Deerwalk as an Intern but this was my first outing since I missed the one before.

Though its winter already, the day was sunny and the climate was moderately hot.

It looked to be a perfect day for the outing. Since our destination was near, the time for the departure from the office was scheduled at 1¬¬1:45 A.M. And it was nearly 12:15 P.M. when the bus moved from the office to the destination. Most of the participants came to the office to depart, but some caught up along the way to the destination. Umesh dai joined us in the driving department. As the journey started, the fun started as well. Snacks and beverages started raining. Squad A was previously known to be cheerful so brothers from other squads also joined the outing with us. The outing is always meant to be fun, but this one was more promising since this was also a farewell to our three previous Deerwalkers, namely Abhinayak dai, Bishal dai and Narayan dai.

After travelling around 2 hours by bus, we reached to our vehicle destination. The bus dropped us somewhere in Panauti, from where we had to walk another 1 hour further through the hills to reach our destination, the Balthali Eco Hill Resort. The journey from the drop to the resort was also pleasing and memorable as the people were cracking jokes, picking each other and the natural environment was eye soothing because of the rivers, jungles, Jhulungebridges and lots of oranges along the way.
Finally, we reached the resort at around 3:30 P.M. A lot of participants reached later before 4:30 P.M. due to lots of entertainment during the walk. We had some snacks at 5:30 P.M. and the campfire started. Sanjeev dai entertained us with his songs while Shankar dai with his jokes. Later we had our dinner and again sat for the campfire. There we enjoyed barbeque and continuous singing of the songs. The night went colder and so did we. We then went to our respective rooms and enjoyed sound sleep except for those who had rooms besides and were sleeping in the same room with our Sanu dai.

I was one of the first to wake up and the morning was a beauty. The fogs were swimming in the air between the hills while on the other side, the sun rose as it always does. Everybody took their breakfast and clicked some photos. The final moments at the resort ended with the gifts giving event to farewell our brothers. They also gave some sentimental humourous farewell speeches and we moved on from the resort. We walked through the same way we did the day before to reach the point where our bus was waiting us.

We all came back with nothing but memories that will be remembered and bring smiles on our faces.

They say, “you don’t really know a person until you have travelled with them”.

Well that may be true but I’ll still have to wait to completely know my teammates because those wonky-eyed, wobbly-footed, rum-in-hand lads that I spent the trip with, certainly were not their true selves. And I say ‘lads’ here because not one of our female counterparts cared to join us for the trip.

This somewhat reminded me of my past college outings when trips had to be planned meticulously in a very slim budget and we’d have to try and bargain our way into everything – from the cheapest destination, to the cheapest cough-syrupy liquor to stacking up of bundles of beds in a single room. Everything seemed rationed to a certain degree. But the organizers tried their level best to make us feel at home. Nevertheless at the end of the day, they did manage to make it fun. Kudos to them! Ever thought of accounting as a career option?

Once we reached the resort, it was the usual – BBQ, drinks, singing, dancing. But I personally thought getting there was the most fun part of them all. The “real party” had begun straight from the bus and the moment it was time to crawl ourselves out of the comfortable bus benches to the almost never ending bridge-after-bridge hike to the resort, everything went pear-shaped — quite literally (blaming my vertigo).

But when I finally managed to pull myself up the hill-top resort, I promised myself that I would stop all the complaining (who would have guessed I would save that up later for the blog :-p) because all of us gathered there not just for a weekend getaway but to bid farewell to our teammates and our truly beloved manager. It was the one final time we all could hangout as a team, as one, and that, I cherished the most. (And also Yashahvi’s crazy dancing – Man you make drunk-dancing a different genre!)