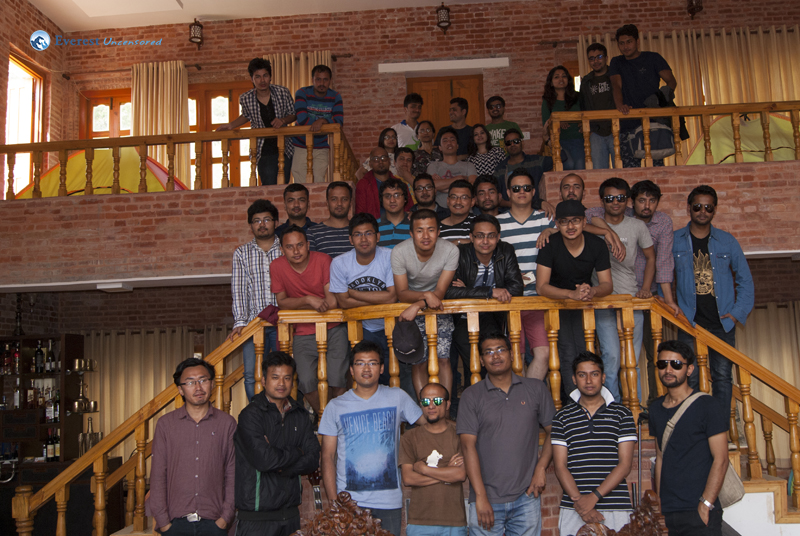 Abisha Thapa Magar
It has been just a month that I have joined Deerwalk and it was already time for my team outing. It was my first outing with the team and words are not enough to express how memorable it was. The coordinators decided the venue at Om Adhyay Retreat, which is about 61 km away from Kathmandu, situated in Makwanpur district. Two office buses were arranged for the trip. We started our trip in a hot mid-day of Saturday. We were excited and started our trip with some chitchat and chips. Moving ahead towards our destination from Kathmandu, there was a huge traffic awaiting us from Kalanki to Thankot along with the mid-day heat. Some of us were chilling with a litchi juice, while most of them with a chilled beer. It was great to see all my boozed colleagues enjoying with a can of beer on their hand. I also observed various hidden talents of the team mates. Bypassing the hot traffic, we headed towards our destination listening some music and started feeling cool as we approached the Retreat. On the way, many selfies and wefies were taken.

The most awaited moment to have fun had arrived as we reached the Retreat.

The fun part was to walk in a line making balance over the narrow pathways to reach the Retreat.

The place was so cool that i felt i reached heaven. Everyone of us then started making themselves comfortable wandering, commenting, relaxing and clicking pictures. We started with the welcome drinks, which contained enough color to mark its drinker, pakora which was seriously not tasty, phapar’s pakora which was oily, salads and the chickens. We soon started the team building game named by our squad as “Ball phuki”. Three teams participated and all of them announced themselves as winner. That was something impossible but was fun to cheer and see them coordinate, run and play the game.

Personally, I liked it when all of us sat around the bonfire, playing music and singing songs. I recognized many of them as seniors, managers and co-workers in office, but outside the office they bear some different and cool personality and skills which i didn’t know till then. I enjoyed listening melodious songs, self-composed songs as well as horror voices. After the dinner break, singing songs continued till late mid-night. Dinner was quite good. I guess they must have used organic potato for cooking. Then, some of us, played cards till early morning. Every room had a well set up but did have false odor. Most of the things like wall, floor, blanket and the whole environment were moist. We really appreciate their wonderful service.

Waking up early in the morning was difficult, but I woke up early in the Sunday morning. Some of us hiked up a nearby hill. We followed a group which already started their hike up to the hill before us. Following them, we climbed straight up the hill to reach them, ignoring the fact that the shoes we had was not appropriate for hiking. We clicked lots of pictures and saw the other hikers passed through us. Again, we climbed straight down the hill and met another group of hikers who brought leech along with them. Finally, we got back to the Retreat and had a good breakfast. We took some final pictures and left the Retreat around 9 am. The return trip was going pretty fine until we reached Naubise. We got into the heavy traffic jam for almost 6-7 hours. We played various games such as cards and dhumsharas to kill our time on the bus. Finally, after a long wait we reached Kathmandu, and our office vehicles dropped us at our stops. I was too tired after a long journey. So, as I reached home, I had my dinner and went straight to bed. It was a memorable trip for me. My first outing made me feel more comfortable and helped me to know more about my colleagues. It was my luck that I joined Deerwalk just before the outing.

Rakshya Pokhrel
As the saying goes by Dalai Lama,

“Once a year, go someplace you’ve never been before”.

I was excited, when our outing destination was finalized to be Tistung. It’s a place, where I had never been before. On the D-day, I left home without any plan. I was somewhat nervous & excited to travel with my team(Genomics) and other teams. Our bus left Kalanki at 12 noon.

On the way, everybody was in party mood, I had heard that Tistung is like a small idyllic valley between the hills and right behind Kathmandu. We sang, we danced, we laughed, we screamed with enthusiasm in the bus. It was fun to chat and joke with colleagues.

Finally, we reached destination Om Adhyay Retreat in the evening, when I saw around, I was like ‘WOW’, and the view was mesmerizing. We had to walk for around 10 mins. to reach the resort. Snacks & tea were well served on that cool environment. We then played team building games. Some of us were high either on drinks or atmosphere that it was difficult to explain the game rules and start the play. As time passed outing became more & more interesting. The moon rose and bon fire was set followed by barbecue, music, songs,dance and drinks. I discovered so many talented singers & guitarists in the group, Naren dai sang very soothing songs. Dinner was marvelous, local food & vegetables were a lot tastier than the adulterated foods of ktm. Later we played antakshari. Everybody sang with all their hearts, Charu didi had our back. I had my favorite drink virgin mojito, everyone was chilling, time passed so swiftly that we didn’t realized it was midnight already. Some slept on tents, which seemed quite exciting.

On the other day, some people went for hiking in the morning, yet I preferred sleeping. We got ready, packed our bags, and after heavy & delicious breakfast, lots of memories & selfies we left for Kathmandu. Sadly we got stuck in jam for 4-5 hours however we utilized the time pretty well. We played cards although I lost some money & Dumb Charades which was really fun; as I am going to remember every participants by their act in the game. Finally we reached Kalanki at around 6pm, 9 hrs. of bus ride & I reached home.

As I am new to Deerwalk, and this is my first outing with the team, I got to know all wonderful and friendly people. The trip was memorable, as, “Traveling – it leaves you speechless, then turns you into a storyteller.” quoted by Ibn Battuta. And, this is my story, which will live with me forever.

It was the day of excitement. The first outing with my colleagues whom I have only dealt with codes, bugs, features and fixes. Yeah, we needed a break, far away from all the work and deadlines and this certainly was the one. With lots of confusions and arguments over the week about the destination, we finally decided to set Om Adhyay Retreat, Tistung as our destination.

The two days we spent in the outing was one of the most memorable moments of my life so far.

Day 1 (19th May, 2016):
Our journey to Om Adhyay Retreat, Tistung had started at 11 A.M. on the very day. We started our fun stuffs right on the bus. We danced, laughed and did lots of other entertaining stuffs in the bus. Finally, we reached at the destination after 5 hours of our bus journey (including traffic jam).

Tistung, a historical and a beautiful place, lying in the lap of nature gives the projection of heaven. From there, we had 1 KM exciting hike to the Om Adhyay Retreat. We reached our destination, settled our luggage and gathered together for food, fun, music and games. Some enjoyed with games like carrom and cards while others were involved with music. The day was very fun, refreshing much like what we had wished for. There was also a team game, called “Ball Fukni” (yeah, we named it so and I didn’t bother to google the real name). The game proved to be a mysterious game in the sense that the ‘winning team’ itself lies in the lap of mystery. Every team claims themselves as a winner and indeed, our team ‘The Chickens’ were happy and satisfied to declare ourselves as a winner. The day spent well and the evening was more fun one with the combination of barbecue, booze and the music. We went late in bed after all the fun.

Day 2 ( 20th May, 2016)
I woke up a bit late in the morning and missed the hiking fun our friends had. They said hiking was more exciting with the leeches they encountered on the path. Then, we again enjoy the morning scenery in the beautiful place with food, fun, music and games. We departed from there at 9 A.M. Who’d have predicted we would have more fun ahead, that came in the form of a traffic jam at Naubise. It was a long one, of nearly 6 hours, but we spent time well with some hiking, music, chit chat and lots of other fun stuff. The frustrating traffic jam wasn’t frustrating at all but with full of excitement and fun. I reached the home late in the evening with some happy moments in my camera and all of them in my memory.