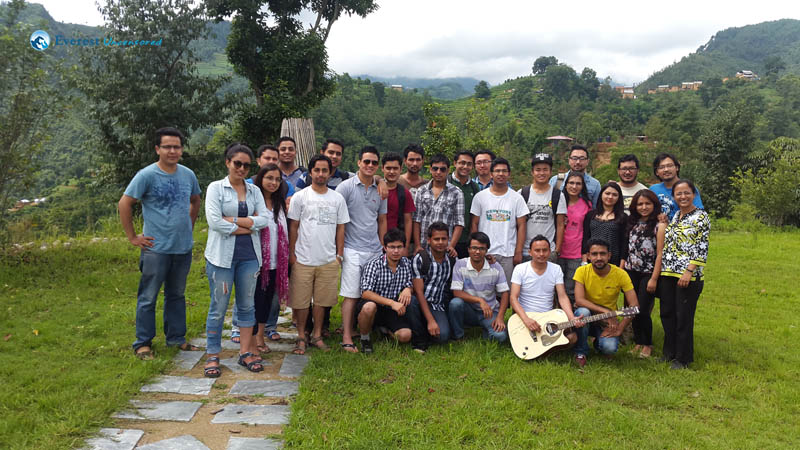 Tikaraj Ghising
I was very excited when I heard about outing of Deerwalk. It was my first ever outing from Deerwalk. It was a different experience for me. Our team decided to organize the outing at “Balthali Village Resort”, located at Balthali, Kavre, Nepal.

We had our office bus for the transportation facilities. We were ready to depart for the outing from the Deerwalk premises at 2 pm. Group of 25 gathered at company to join the journey, whereas few were picked on the way to our destination. Drinks and snacks were served and lots of photographs were taken by the coordinators on our way.

Good music, dancing and several games like antakshari really made our journey more exciting and merrier.

Good music, dancing and several games like antakshari really made our journey more exciting and merrier.After 1 hour of drive, we reached Khopasi, which is 40 KM away from Kathmandu.

We reached to a point where, two four wheeler vehicle came to pick us up. Since the two vehicles were packed, few of us decided to hike up to the resort. After reaching to the resort, we were offered refreshing drinks. We sat down for a while and got carried away with the beautiful scenery around us. It was all greenery around with a lovely weather. We then chose our rooms and placed our baggage in the respective rooms. The resort was a real paradise with greenery all around which has been built on top of hill above Balthali village. This station provides view of beautiful landscape of the village along with the view of the Mountain ranges.

Team building games, Barbecue, songs and dances turned our outing into a memorable event. Narendra, Bishal, Sagar and Sanjeev’s Guitar and classic Songs turned the evening to a melodious one, which everyone enjoyed it. Around 10 pm, we had our dinner and went to bed.

The delicious lunch, garnished with organic vegetables, along with appealing view of landscape, hills, mountains and soothing villages made me feel relaxed after a long time of hectic schedule. I am sure everyone really needed this break to refresh themselves. The place was indeed a great place to view wonderful villages and Himalayan ranges.

The next morning, we decided to leave the resort before the afternoon. We took some group pictures, to finally wrap up our journey. The office bus came to pick us up. We had a delicious heavy breakfast and headed back.

Sandip Tripathi
I believe my colleagues had as much fun as I did. I am really thankful to the organizers and Deerwalk, for this successful outing.

It was really a wonderful experience of being part of outing arranged by Squad A to visit Balthali on 18th and 19th July,2015. We headed towards our destination from office premises at 2:00 pm. Some of the participants of the outing were picked up on the way. We chanted songs and made a lot of noises in the bus. Some even managed to dance. Meanwhile, we reached to the stop at Banepa . It was planned for short hike from there to our destination. Our plan was interrupted by the rain so only few participants joined the hike to reach Balthali and rest of us traveled on Jeep.

While we were traveling on Jeep, we could see beautiful scenery, stream, pathway through thin forest and beautiful village, we wished if we were on the hike too. We reached to Balthali earlier than other participants who followed hike. As they finally reached the Balthali, they were so fatigued, still they were satisfied and more excitingly they were explaining us about their voyage.

We were warmly welcomed by Balthali Village Resort where we planned to spend the night. Firstly, we were served cold drinks. After that, we keep on wandering around the resort premises to observe the enigmatic beauty of the surrounding. By that time the weather was pretty cool, the rain halted and there was just little shower. We could feel the clouds passing by us. We then gathered to play team building game before we took snacks. We were divided among three teams each consisting 7 members. It was a lot of fun. We took snack right after we completed the game. It was already dusk and everyone were sitting around. It was barbecue time. Luckily, we had so many people in our team to play the guitar nicely and sing varieties of songs. All of us supported them in the background chanting the songs. I can still remember the rhythm of the music we played at the moment. Everyone of us were so touched. We played classical. We played romantic. We played sentimental. And we played even hard rocks.

Everyone of us were so touched. We played classical. We played romantic. We played sentimental. And we played even hard rocks.

We could feel the pain in our throat but nobody seems willing to stop. Everyone were in the mood to sing. So we took dinner later at 9:30. After dinner some of us played cards and some continued with the music. We took nap only after midnight.

On the very next day, we woke up little late in the morning. We were still tempted to behold the beautiful scenes visible from the resort. We were served breakfast and finally we had to leave the place. We returned by the jeep and our office bus was already there when we reached the stop from where we started. By that time, It was already 11:30 am. Some of the participants were dropped on the way as per their convenience. This how we concluded our journey with lots of wonderful memories imprinted on our mind. It was well organized and really marvelous. Lastly, we badly missed our friends those who could not join us in the outing due to their inconveniences. Hopefully, we will have great time again together with everyone in the team in similar occasions.

Basanta Lamichanne
On Saturday 18th July 2015, as a team building visit a team of Deerwalk decided to visit the Balthali Resort. At around 1 pm we fastened the seatbelts and headed to Panauti through Arniko Highway. Singing songs in the Bus, we reached the mid-point, the base of the Balthali Resort at around 3:30 P.M. and one of the group hiked, being through Suspension Bridge. They proceeded taking photographs while another two groups were managed in jeep. The road was 90 % steep and slippery till that very Resort.

We reached the Resort at around 5:00 P.M. and after reaching at the top of the hill we saw that Resort and were breathing a fresh air of success. The trip from the base of the hill to the very top was really an adventure. “Wow what a view” my friends started to shout. We felt like we were too far away from city. It’s a typical Village; you can see typical Nepali houses, people and lots of things. Also the Resort was too good, we all welcomed with welcome drinks. Their hospitality really impressed me and our group as well.

We started with some snacks and refreshment drinks. Now was the most awaited moment. “A Team Building Game” was announced and three groups of people, 7 each, were separated in line. It was a game in which a ring should be passed from people to people through hand-chain without leaving the hand. All played well and girls’ team won the match. Then as usual trend, the loser made the moment thrilling for a while by snatching the chocolates from my hand and but I made it more exciting by not giving them to steal it. Finally, I gave up, as I was trying to preserve inventory for the next game. The moment was more joyous to the viewers and lastly I awarded chocolates to all people.

With the guitar in the hand, Narendra dai started and all were in, with the voice and melody of music, singing songs. We kept singing and Barbecue chicken was being served before we took break for Dinner. After the dinner, again we kept rocking on the music and playing cards. Late at night we all went to clean and well decorated rooms of BVR.

With the sunshine, we woke up from the world of dream.

With the sunshine, we woke up from the world of dream and united in dining hall. The breakfast was salubrious and all said it was awesome. We then took group photographs and returned back in Jeep at midpoint of Paunati and Balthali. Deerwalk Bus was waiting for us and we came back with lifelong memory, leaving nothing except foot-prints and taking nothing except photographs.

0 thoughts on “PA DEV and Genomics Team Outing to Balthali”