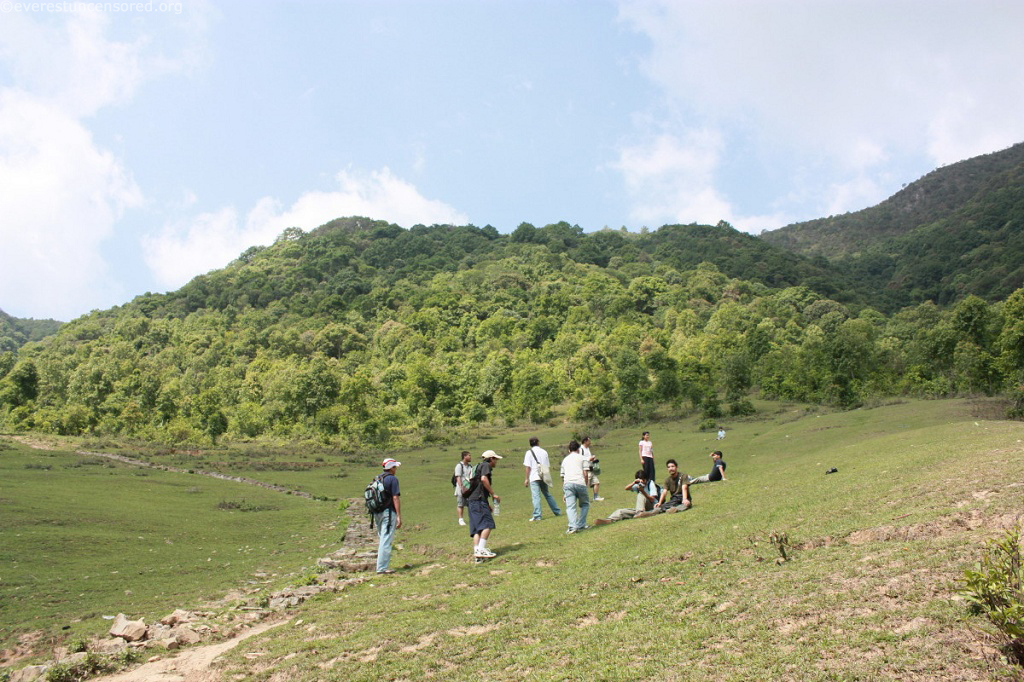 For my first ever hiking from D2, I reached the office premises ardently at around 6:15 am only to find that no one had arrived except for Ram dai. Then one by one people starting showing up and at around 7 am Ram dai took grasp of the wheels to drive us to the destined spot. We started off with some songs played aloud from Ravi’s collection that left us head banging inside the van and Suresh dai’s doses of fresh morning jokes. We picked up Surendra dai, Anna and Omendra from ‘Krishna Pauroti’, the place named after the most famous and the oldest Bakers of Kathmandu. Prabhat was picked up from Kalimati again a well known place for fruits and vegetable outrage early in the morning as well as all day long, en route to Balkhu. We still had to pick Pratik, Satyajit dai and his team from Balkhu, so as we stopped by to pick the remaining promising hikers (esp Pratik although he had his hand fractured, decided to join). We stopped at Balkhu to get some supplies for the hike and also decided to sit for breakfast there. Profoundly loaded with Puri, Tarkari, tea, and some sweets for breakfast at around 8:00 am we headed towards Taudaha.

The beautiful trees around, and high hills before us were so majestic that it proved as a painkiller for our straining legs.

We reached a few hundred meters past Himal Cement Factory to a place near Taudaha and as suggested by Surendra dai decided to get down from the van to start the hike. With a small meeting with one of the locals and his directions to Hattiban Resort via the jungle ahead we got ready for a very comforting (thought to be) yet enthralling hike.

Hiking started at 8:30 am and we walked through a rugged road which was under construction to get to Champadevi Pau (foot of the Goddess). On the way to the temple we made frequent stops because the way thought to be just a warm up for the main event proved to be a tough terrain to walk already. The Sun had already gone up and had started to suck energy out from us but Ravi’s talks of the Rappers from East and West Coast kept us entertaining all the way up. We had some pretty healthy hikers with us like Satyajit, Neeraj and Prajwal dai who complained time to time saying “KILL bhaye ma ta”. Then the word ‘KILL’ started playing in the mouth of all the Hikers. So whenever one felt tired he was said to have been KILLed. The way seemed to be tiring under the scorching sun but we kept pushing forward to reach Champadevi Pau. We reached the temple, rested there for a while and decided to scale a hill to reach ‘Bhanjyang’. After walking for nearly 2 hours we then reached the bhanjyang. It was a steep trail with difficult path and everyone was finding it difficult to conquer the hill at a single go. So we had to take multiple breaks. In doing so the hikers managed to put a bright smile in their face as cameras were being clicked. The trail was really tough but the hikers were determined to finish the hike. There was no turning back and the hikers knew that. Despite the sun and the path after 2 tough hours we were at the top. It was just another reason for the hikers to take another rest. After around 20 minutes it was time to move ahead. Rejuvenated and rejoiced everyone started walking as if they had just started the hike. As we moved ahead through the not so dense Pine forest the word “KILL” and “East Coast/West Coast” constantly played a major role in one’s conversation.

Finally we reached the Dakshinkali Resort where we were supposed to end our hike. The gatekeeper asked us questions and was not letting us in. Finally, he opened the gate to let us in. We were hungry and tired but ‘toil above the soil and have never realized there would be fun walking under the scorching sun, when you have your pals around.’

It was not so good place and every one decided to go somewhere else to take a meal. We called Ram dai to pick us up and he was there in a flash. We moved towards MPC to take a dip in the swimming pool and to have our meal. But alas!! The place was so crowded that even Bharat got lost for a while and the search team that went to find Bharat also got lost. After Bharat showed up, we all went for lunch and then back home to rejoice the adventure.

Being just 3 days old at D2, I was all excited and set for hiking in such a short duration of my joining. As per plan, I was picked-up by the office van at Balkhu. The van had just crossed the road when we decided to have breakfast at Balkhu itself. Having good breakfast there, we were all set to start our journey towards the spot. Environment was hot, music was on, all of us were looking forward to start the most exciting experience.

I couldn’t stop my laughter when I saw a friend asking each and every person we came across after that, “Didi, haattiban kati tada chha yaha baata”

Yes, we reached ………, the place from where we had to leave our comfort ride and start a real trek. Water bottle in hand, we all stepped out of van one-by-one and started to walk – we were no less than a tourist who comes to visit Nepal to explore its glorious and natural beauty. Just then somebody pointed to the top hill covered with trees behind us and said slowly, “Friends, that’s the place we have to climb to”. Ohh!! That’s too high, are you joking!, no way man!! – were some of the reactions on our faces. I thought we might not have to climb that top but just half of it and return back probably. We all started walking towards top. Yeah, this hiking seems to be a fun, we were chatting, cracking jokes, laughing, enjoying and knowing each other in a better way. Slowly and unknowingly the road was becoming loftier. We realized this after we started feeling strain in our legs.

Temperature was high and we got tired soon, so we decided to take rest for sometime before we continue our exploration further. Hmm, the water bottle, which seemed just a burden few moments ago, came to a rescue – it quenched our thirst and made us ready to leap further. As we moved up and up, the road and the houses from where we started seemed to become smaller, more and more, slowly and gradually. The beautiful trees around, and high hills before us were so majestic that it proved as a painkiller for our straining legs. Wow, so heavenly, so untouched natural beauty – what a breathtaking experience it was!!!

If some group reached ahead before others, they would wait for rest of us to join so that we don’t get lost in the thin, zigzag and confusing roads and forest. It was a true team spirit, a true care for each other, and a true hiking experience. “How much more to climb further?”, One friend asked Surendra dai who seemed to have explored this place before and knew in-depth about it. “We’ve completed around 25-30% of it and rest around 70% is still remaining”, was his fun-filled reply. Oh man, we seemed to have walking from such a long time and it’s just 25-30%, what a heck! I couldn’t stop my laughter when I saw a friend asking each and every person we came across after that, “Didi, haattiban kati tada chha yaha baata”, “Dai, haattiban jaana kati hidnu parchha”. Man, it was fun. Similarly, resting in different places, and walking, chatting, we reached the top. The view from the top was so beautiful that we forgot everything that we came across to reach up to there.

Overall, this hiking was an outstanding exploration, a great memo to rejoice for in the future and an unforgettable experience.

I had expected the hike to be easy and fun. Well the hike was definitely fun but not easy. It made me realize my health status. As I still had my plaster on because of which I could not play or do some physical work I decided to join the hike. It was just another excuse for me to walk and do some physical exercise. Once we commenced the hike there was no turning back. The sun was shining bright. The heat really took its toll as I could feel myself getting drained. For the first time I could feel my legs getting tired. This really rang a bell in me to warn me of my health level. Thanks to Aashish who considered me for this hike despite my health status. It was a wonderful hike and the trail was just breathtaking and tough. But I had so much fun during the hike especially with Suresh Dai and Anna (Surendra dai’s daughter) constantly cracking jokes. The sun really played a big role but our determination was better and more rugged than the scorching heat and temperature. The steep uphill hike and the walk through the pine forest were really fun. Taking the leech off Abhishek Dai’s back and “KILL” constantly kept me busy. Ravi’s “East Coast” and “West Coast” was well pictured and I hope I get to see them in EU as well.