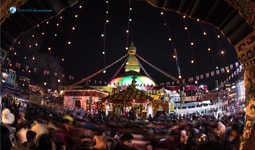 Photo Description:
This photo was taken on November 19,2016 at Boudha. The Boudhanath Area Development Committee (BADC) almost completed renovation of Boudhanath Chaitya (Stupa), which is one of the World Heritage Sites in the Kathmandu Valley said to be first built in the fifth century, that suffered damages due to the April 25 earthquake. It has been learned that Rs. 230 million was spent for the renovation of the ancient shrine.

More than hundreds of Buddhist priest participate in the three days purification rituals.