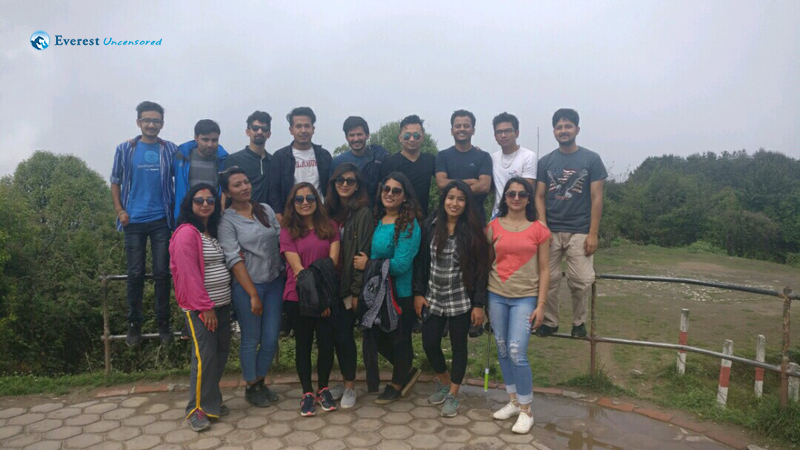 It was all about 23rd, April 2017, the most awaited hike to Nagarkot. Lots of tourists to Nepal have often likened the country’s scenery to postcard pictures. It’s not an exaggeration, not by any means. What’s more, you don’t need to go too far from the busy city of Kathmandu either to see such scenery. One of the best places for this is undoubtedly Nagarkot.

At around 7:30 am half of the hikers including me departed from Deerwalk Complex : remaining to be picked from their respective station. Well, actually being as incipient, that was my very first hiking from Deerwalk. I was fortuitous to be a part of hiking. The weather was pretty much cloudy, we could see thunderstorms defying our hiking, but was not enough to quash our willing power. We reached Siddha Pokhari at 8:20 am for breakfast; really a delicious Newari variety. Breakfast revitalize our energy and we leave for our next destination, Changu Narayan. The temple, a UNESCO World Heritage Site, is one of the oldest Hindu temples in the valley, dating back to the 4th century. A stone slab discovered in the vicinity of the temple dates to the 5th century and is the oldest such inscribed stone ever found in Nepal. We reached Changu Narayan by 9:30 am. Around the temple is a neighboring village where one begins to get a sense of Nepalese village life – children playing in the dusty lanes, women washing each other’s hair by the roadside, stray dogs milling about, enterprising vendors capitalizing on the tourist flow by selling all manner of trinkets. We could see the ramifications of earthquake, the temple was in process of renovation. There was a twist and turn when we noticed unpredictable weather of Changu Narayan. We waited for more than a couple of minutes, then after weather seems much more clear.

The hiking actually starts from here. We carried a bottle of water, chips, dry foods to fortify our energy all the way to Telkot. We were walking through the forest where we see lots of leeches, it was somehow irritating moment. As we were moving ahead we can see the clear white mountains around us. We keep on walking talking with each others taking some photos. We reached Trisul dadha by 11:15 am. It was amazing, we can mesmerize the serenity aesthetic of hills and valley. Within a walking distance, we were able to reach Telkot. After spending time for a power nap, we move toward Nagarkot, the air is invigorating and the landscape is refreshing, the atmosphere was quite moisturized, we felt cool breeze: hoping for sunlight.

Whoop, we finally arrived in Nagarkot around 2:00 pm, our diligent really pays off, we were astonished of panoramic views of the majestic Himalayas. Everyone face was glittering. The place is chock-a-block with attractive resorts, many of them perched on hilltops and with rolling hills behind them, changing color along with the distance, and rolling over each other as far as the eye can see.

There was a big tower, all of us started climbing that tower. I got breathtaking views of Mt.Everest, Manaslu and Gauri Shankar.

There was a big tower, all of us started climbing that tower. I got breathtaking views of Mt.Everest, Manaslu and Gauri Shankar. We clicked awesome picture in tower hanging around it. getting down, all of us gathered and started sharing an idea for lunch, introduce more closely to each other, we decided to have a lunch in Bhaktapur . After while we leave for Nagarkot with memorable moments. Returning to Bhaktapur, we had a lot of photography session in the pathway. we were singing, laughing, poking each other at vehicle. Our tolerance of hungriness comes to an end when we reached Kamalpokhari, Bhaktapur right at 4:30 pm to have a lunch, we ordered some continental as well as Indian foods, well I appreciate the level of taste and hygienic of food. I still can feel the taste. We rest next 30 min after having lunch: there after all the way to Kathmandu; at somewhere middle between Bhaktapur to Kathmandu we had ice-cream.

It was 6:30 pm, when I was right back at office premises. I was tired, blessed, satisfied, what I have achieved.

Lastly, there are quite a few backtracks around Nagarkot, hiking on which, I get a good taste of Nepal’s natural life. One trail, in particular, is the one that takes to Telkot, and it must be said, I was surprised at how different it is from the tourist hotspot of Nagarkot. Hiking is, of course, the most preferred way to explore and discover, the knowledge and anxiety.

The day finally arrived, it was my first official hike and I was excited for getting the opportunity. The hiking route was from Changu Narayan temple to Nagarkot via Telkot. On 23rd April 2017, Sunday morning I reached office at around 7 am. After a while, I was joined by few other teammates and the journey began at 7:30 AM. We picked up the rest of the hikers from their respective location and reached Bhaktapur at around 8:15 AM. There we stopped to eat our breakfast and began our journey. At around 10 AM we reached Changu Narayan Temple premises.

Every hike is different from another. Although the hike duration was a shorter one but due to the rainfall the hike became an adventurous one as we had to walk on the muddy and slippery roads. A journey is best measured in friends rather than in miles so however, the roads were the journey was a memorable one.

The rain had already begun when we reached Changu Narayan. We took the blessing and some pictures and were expecting the rain to stop. We waited for a while but there were no signs for the rain to stop so we moved from there. But the luck was in our favor so the rain stopped as we walked towards our destination.

While walking, our group got divided into two and we were walking on the front with the same pace and we soon realized that the second group was far behind. So we decided to wait for them at Trishuli Danda. Again we took some pictures and soon after our team members joined us, we moved ahead. We stopped in between to eat snacks that we carried with us.

On the way, we also stopped to do a mannequin challenge. It was fun shooting for the video and after many attempts finally, we managed to take the video.

On the way, we also stopped to do a mannequin challenge. It was fun shooting for the video and after many attempts finally, we managed to take the video. After walking through the jungles for about 3 and half hours we reached Telkot. There we stopped for a short tea break and headed towards Nagarkot Tower by van and from there on foot to the tower.

Nagarkot is popular for a stunning sunrise and sunset view and is one of the most popular hill stations. Situated at an altitude of 2100m from the sea level and 32 km from Kathmandu this small hill station provides a spectacular view of the northern mountain, sunrise, and sunset. But we couldn’t see the view as it was a foggy day.That was the ending point of our hike and I was copious with the joy of successfully completing the journey. From there we headed back to Kamalbinayak for lunch at around 4:30 PM. After that, we went to eat special Hada Ice Cream and then we headed back to Kathmandu. The best part of the hike was the beautiful foggy weather and the people with whom we got to share this amazing experience with.

126 thoughts on “Hiking to Nagarkot”