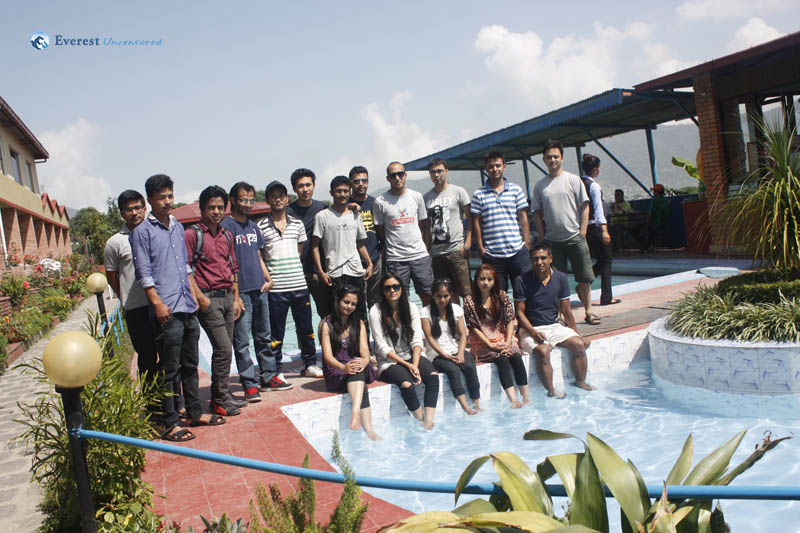 Santosh Dev Bhandari
I was feeling pretty bad when I first heard that our outing was canceled due to the recent earthquake as it was going to be my first ever outing experience from the company. But sooner later the company decided to organize the outing. Our team decided to organize the outing in Khushi-Khushi Resort located at Matatirtha, Kathmandu as it was inside the Kathmandu Valley and also unaffected by the recent earthquake.

We started our journey of outing from our company premises at around 2pm. Most of us rode the bus from the company premises whereas few were picked on the way. We started having fun immediately after our journey began. Some friends started drinking while others started taking photos. As our destination was not so far we reached the Resort at about an hour. While we reached the Resort we were a bit hungry so our coordinator told the Resort staff to manage the snack for all. We have had some snacks along with drinks then everybody was excited to swim. As we were all prepared for the swimming, we started swimming immediately after the snacks. While some were swimming, others were playing Table Tennis and Pool.

As the day was turning into the night everybody was enjoying at their best by singing, dancing, swimming, playing and having barbeque. The view of Kathmandu Valley from the resort was much more pleasing at night compared to day light.

The view of Kathmandu Valley from the resort was much more pleasing at night compared to day light.

At around 7pm Rudra Dai also arrived at the resort. Our Team had some fun chat with the Rudra Dai for about an hour. Before having dinner we enjoyed our moment in the pool singing the songs along with the melody of the Guitar. After dinner we started singing songs by dividing the team into two groups.

The next morning, as everybody was tired and few have to reach the office for work. We decided to leave the resort soon so we called the bus and had some breakfast. After the breakfast until the bus arrived few of us decided to swim while others were taking photos. Freshened up we left the resort at around 10am in the morning. Personally, as a new member of the team I was delighted to have such a friendly colleagues and seniors. Thank you Deerwalk and the whole team for organizing the outing so well.

Sashwat Raj Pandey
First week of joining the office and you hear about an outing being organized. The first thing that came to my mind, should I go? As it had been a week , I was familiar with a few faces in the office who told me that it’d be a great opportunity to get along and have fun and so my mind was set.
The day of the outing and it was Saturday. Everyone was relieved that there was no rain to spoil the party. So a group of around 25 gathered and the boarded the bus to reach our destination “Khusikhusi Resort”, located at the outskirts of the valley where the rush of the city meets the peacefulness of the nature. We reached at around 2pm and then the party started.

It didn’t take us long to open a few bottle of drinks and jump into the swimming pool. I was feeling out of place but then just in a short period of time everyone started interacting. It was just a matter of minutes for me to get along. The whole environment was fun filled where I couldn’t see a single person who wasn’t enjoying the moment. It was around 5pm, we were all having snacks when someone came out of the room with a guitar in his hand and the mood was set.

Good people and great music.Also we must not forget the drinks we had in our hand. Some swam others sang, all in all no one was holding back in having fun.

Nightfall and the barbeque started.Along with it came the part where we all could let ourselves loose on the dance floor. Neliya di along with bikram dai and others did a good job as our self-appointed DJs and how could I miss the unmatchable dance steps of Dinesh dai. Dinner time didn’t last long as everyone was eager to get back to their ways of having fun. Then I saw someone who wasn’t a part of the outing but he was a familiar face to all of us, Rudra dai. Who would have thought he would show up unexpected but the thing that surprised me more was the way he blended in as one of us and started to have conversations. That only meant one thing, it’s not only about work in Deerwalk, fun and familiarizing with colleagues go hand in hand as well.

The night was all about singing and dancing. Some sat and played antakshari while some people sat and listen to Saurav dai playing guitar saying and I quote-“Tell me any grunge song and I’ll play it”. He wasn’tlying; he actually played all the songs that came to my mind. It was around 3 am and exhaustion crept into everyone and we all decided that it was the end of the day.

Next morning everyone woke up had breakfast and it was time to leave and that marked the end of our outing. We didn’t go to places people usually go for outings, it was just around the corner. Fortyminutes’ drive I guess, but what it shows is when you are with people who love having fun, the place doesn’t matter.