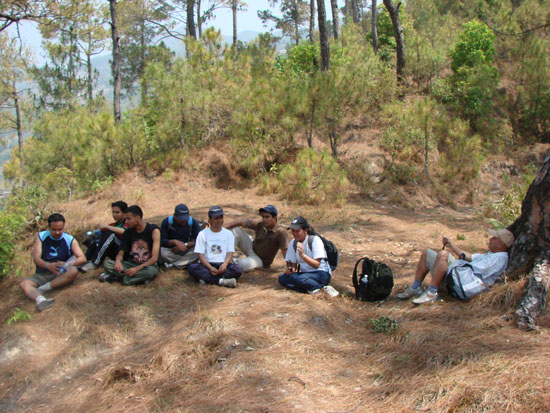 It has been couple of months I missed D2’s hiking. I had pulled up Chinese cock’s ears to alert me in the morning in case I may sleep longer, but I woke up just to calm the alarm before it rings. I got fresh and was in D2 premise around 6.30 in morning. Soon others began to gather. That formed a group of 8 people, just enough to a good reasonable size.

With some political gossip and jokes we reached Jorpati. Diku, a doctor joined the team and we were 9 then. We stopped there to fill ourselves with energy for the excursion. After the activities at rations station we left Jorpati, heading towards Sundarijal but we took a U turn to Mahankal village. Challenges seemed to be with scorching sun as we are in summer already. All fresh feet started to march.

The path of the tour consisted of forests, hills, riverbanks with no specific trails. We often made the trails ourselves. Almost usually we often get the same answer from the villagers when we asked them for direction. They interpret it “Oh! You are in wrong path, you missed it, please go straight in this direction you’ll find a road, take it and you’ll reach your destination. There is no way where you are heading.” Then it’s becomes hard to convince them, because they think we are lost.

In an hour or so we crossed a small village there to reach into deep forests of Shivapuri National Park. However Surendra filled his backpack with some flowers plants, uprooted for implanting in his garden. We were informed that we can reach our destination in two ways via the forest. First one, climb to peak, follow the wide path. Second one, walk beneath the peak laterally, you might find dead ends. We chose the later one. Making strong foothold on way was impossible with slippery dried fallen pine leaves on the ground. The cool breeze, I liked the sound of pine trees made, while flowing by wind.

We had to change the direction of our trails, after we faced continuous dead-ends. We had to climb towards peak to find “the Shivapuri gravel road”. After some good efforts we happened to be on the road, now we had to follow it. Though the road had tyres marks of vehicle, but we did see no vehicles during our walk. Making any shortcuts possible, in between we walked the meandering path. It was the trees, which helped us for blocking the scorching sun while we were inside the forest. The difference we felt when we were walking on the road.

We rejoiced in the bushes for full of ripe “Aaiselu”. We were greedy to eat as much and as fast we could, ignoring the thorns scratching our skin. Vishnu, Mahesh and Nischal were quite in a distance ahead of us. With lethargic body and tired feet we carried ourselves to a hotel there. Spending no time in hotel we left towards Naagmati.
We were soon began for jumping, splashing in the chilling cold water. The current of water over years had created artistic structures in stones. A small pool was also formed there. Even in that heat one couldn’t stay long in the cold water. Water fell from one stone to another as in dancing mood. The height wouldn’t let me call it a falls, but the force of it can be felt when staying beneath it. This chilling cold water, took away all the pain and lethargy of the body. Bathing in the water was the best part of this hiking for me. Basking for few minutes lying on stone, we returned to hotel. We had delicious meal there, which no one could stop praising.

After the lunch we left hotel and walked along a reservoir to be supplied in Kathmandu for drinking. The historical structure in dam was worth seeing. Walks of about an hour from hotel led us to our van. I would like to borrow Kapil’s word “it was yet another beeeessssssst hiking” to conclude it.

01 Sharing thoughts and feelings for theday

04 The hill becoming smalller without explanation

05 The orangee different from other in the village

16 The order of plants

20 The destination was beyond the next hill

21 Sanjeet got a little pond

22 Hold the tree and feel the warm

23 Most important of her kind

24 Imposing a penalty on

28 It was a good for exercise

29 Cleaning pine leaves off the trail

30 Dr. Diku says Surgery much easiear than to hike

32 She resumed the negotiations

33 Having a supporting base

35 In the name of someone

41 We will find out what they are in other hike

44 Made to some worthwhile causes-Denro & Rhodo

48 A course of conduct

51 This is how i express great joy

52 Have shower without water bill

54 The last section and concluding action for the day!!!

0 thoughts on “Hiking from Sundarijal to Naagmati”