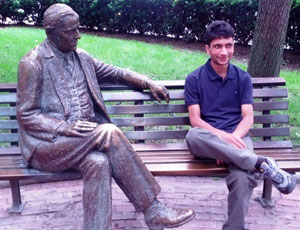 “You will have a different experience. Visiting new places is not so bad.” I never said that I wouldn’t go, but people kept on pushing me. I do not know why but people normally over-recommend things to me, maybe because I do not believe most of them.
Finally, the day for departure came. With a final glance at my sisters and brothers at the airport, I moved towards the queue. During the layover in India, I met two Nepalis going to Chicago and some others going to various Arabian countries, so time passed pleasantly. Then, we started the long, almost boring, trip to New York but I found it to be a new experience. After landing in New York, I came out of the terminal and searched for the next terminal and my connecting flight. A man showed me the way and I walked about five minutes to catch the Jet Blue plane to Boston. I’m not sure why, but Ashay Thakur, a colleague, had to walk for five minutes, take a train, and walk another five minutes to reach the same place.

I was lucky to be placed at the Waltham residence of Sanjeev Tuladhar, another colleague, for the duration of my stay in the US. He would not take my arguments on various matters for granted, like most people do, and would instead provide suggestions. I learned many things from him because one normally changes ones behavior only when feedback is received. It reminded me of my deceased elder brother who was always teaching me something and who was my best guardian ever.

Most weekends, I went sight-seeing with Ashay which was convenient for both of us. Neither of us were very familiar with the places we visited and I’m certain that long-time residents would have found our difficulties in navigating around amusing. Ashay asked literally hundreds of people for directions and that fortunately saved us from getting lost. Surprisingly, the big cities were much easier to navigate than the smaller towns. One time, we waited for the 170 bus for hours; only to find out later that it did not operate during weekends. And, had it not been for Sanjeev and his vast experience, we would have hardly made it to the office each morning.

While working in a team, being physically together matters. I could feel the difference between being together with colleagues at the office and being connected via just phone/ internet. We had lots of whiteboard discussions about our next technical moves and being face-to-face helped a lot. We even discussed the machine learning project that we could plan for as an upcoming product of the company.

Most of the events I attended with Deerwalkers and their families were memorable. However, those events were also difficult for me in some aspects; I felt as though I had been reunited with long-lost family members. Viewing the glory of July 4 celebration fireworks, Anadi Risal’s vegetarian barbecue party and Erica Pandey’s Arangetram were some of the important events to name a few.

After a few weeks of work and a few weekends of get-togethers, my return date came and I had to say good bye. Overall, my trip was more than just a journey and I must say that being a vegetarian in the US was not as difficult as I had expected!