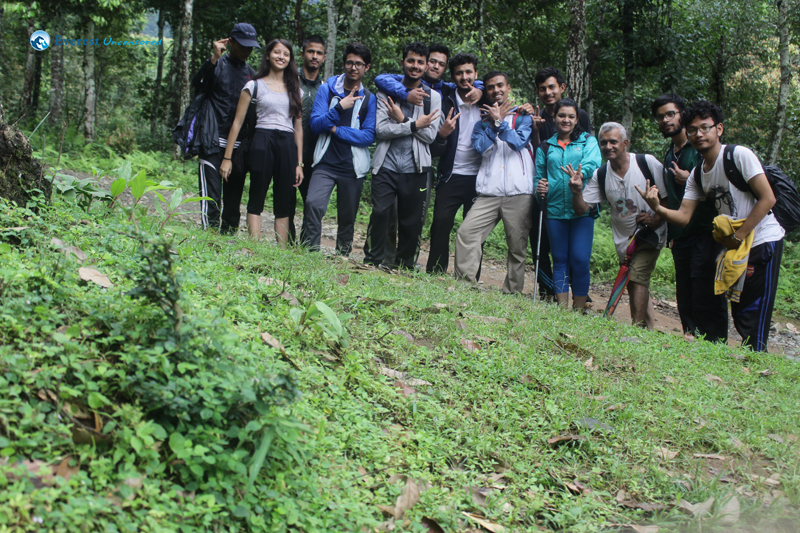 Hike from Lakhuri Bhanjyang to Godawari was one of those trips where you get to experience a new and different taste of nature. We started our journey from college at around 7 in the morning. We reached the starting point of the hike, Lamatar, at around 9:00 am. The path was pretty steep in the beginning because we tried to take a few shortcuts to reach Lakhuri Bhanjyang, which resulted in everybody getting sore muscles really quickly. After a quick break, we moved with a good pace. The weather was foggy with slight drizzles and was perfectly fine for the hike. The view on the way was what you’d call ‘Raised Eyebrows Big Smile Weird Faced wow’. We also saw a swarm of earthworms on the way, which was quite baffling and disgusting.

We reached our first destination really quickly. Then, we sat down on a small school yard which was near to an exquisite view of a pond with the reflection of the forest around it. It was simply perplexing that a small area could be so divine and we’d be so lucky to see the surrounding at its best. We had some snacks and moved towards another destination, Godawari. It was around 2 pm when we started to move after the break.

The way to Godawari was downhill. The path was narrow and slippery (not to mention, earthworms were present everywhere). There was an awkward and unwanted competition of falling over a lot, which I undesirably won.

One disgusting thing that happened was; I fell over a pile of earthworms.

One disgusting thing that happened was; I fell over a pile of earthworms.

We also had a bunch of uninvited guests who followed or even lead us to our destination from the very beginning of the hike: Dogs. The other unwanted visitors were leeches who irritated us constantly as they clung onto our legs from time to time. Thankfully, we got rid of them after arriving at Godawari. Then, we freshened up on a kunda, had our meal, and returned back.

Overall, the hike was truly adventurous and I had more fun than I had expected. We saw the beauty of nature, roamed with insects and got as messy as we possibly could. Going on regular hikes like this would be memorable, and with Hiking Club, nothing is ever boring. Cheers!

Lakuri Bhanjyang Hiking was one of the best experiences I have had in the recent time. We were called at the college at 6:30 in the morning. After everyone arrived at the college we headed towards Lamatar, the starting point of the hike. We were already hungry when we reached there so we had a light breakfast in a small teahouse.

We started our hike from there heading towards LakuriBhanjyang. It was raining lightly when we started our hike but it wouldn’t stop our excitement. Though the beginning of the hike was quite difficult as we had to walk up the very steep hill as the rain, which had already stopped, made the way very slippery but the view and every bit of nature was equally mesmerizing at every step we took.

The cloudy sky, the misty environment, the cool breeze and the baffling view just made us forget every bit of difficulties we were facing.

he cloudy sky, the misty environment, the cool breeze and the baffling view just made us forget every bit of difficulties we were facing. While we were climbing the hill, we were all attacked by the ganon of leeches, so we took a short break just to check and remove leeches from our body. At that point, everyone was just taking off their shoes and socks and sprinkling salt to get rid of the leeches. After all was clear, we continued climbing uphill for about 2 hours. The path got less steep and easier afterwards. On the way to the top of the hill we also encountered lots and lots of earthworms. Thousands of them!! I had never seen so many earthworms in my life. Though many were disgusted by the sight I was pretty amazed to see those large ones. Then after walking about one more hour we reached a small school. There was a small pond just beside the school, which provided the perfect view of the hills and the forest around it in its reflection. The scene was just breathtaking. We had our lunch at the yard and enjoyed the mesmerizing view. I surely felt like not to go anywhere from there and was kind of jealous of the students who could have such breathtaking view every day from their school. We took a lot of pictures almost every one of us got our new profile pictures there. It was hard to leave such exquisite view so we tried to enjoy each and every moment to the fullest.

We resumed our journey after spending about half an hour there to reach our final destination Godawari. The way to Godawari was now downhill which was even more slippery. I myself slipped and fell twice which was very embarrassing, considering that it was at the very end and the path was not much slippery. With series of careful steps and some falling we finally reached Godawari at around 3 pm. We just ran up to the pond which was so clean that we could see the bed of the pond. We washed up ourselves there and got engaged in water splashing. By the end of water fight I was completely drenched in water. And yeah, we even tried fishing with our bare hands but failed terribly. We took some photos there, then we had a heavy lunch at a nearby hotel and came back to our college.

The hike was a complete package of fun and adventure. We got sore muscles, got bitten by leeches, and fell over multiple times but we persevered through all those difficulties and had one of the best moments of our life and not to forget we carried back great memories along with more stronger friendship and respect among each other. And hey! Isn’t hiking all about stepping out of our comfort zone and having some adventures? A big thank you to the hiking club for such a memorable hike and cheers to all the hikers out there.