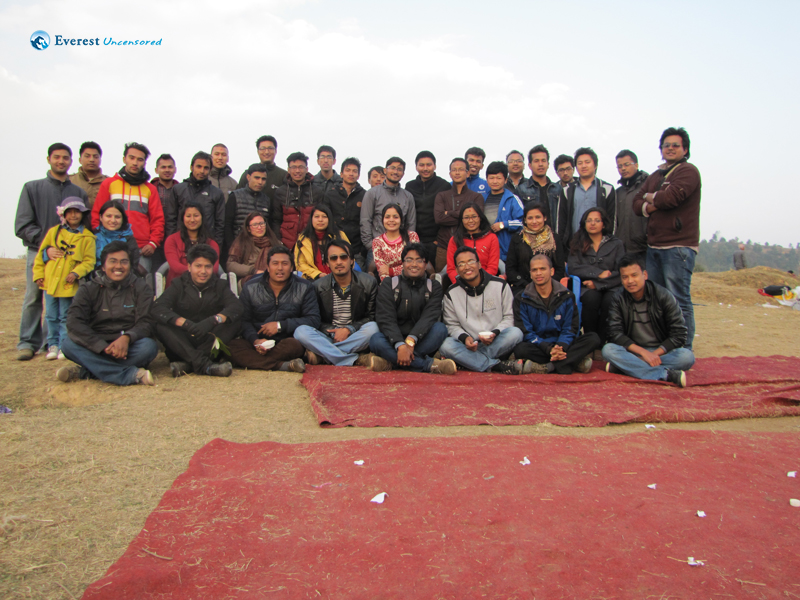 Arjan Maharjan
After three months of joining Deerwalk, We were supposed to go for a picnic. Finally, after two weeks of hearing picnic stuff the day arrived, February 14th, 2015: Our picnic day and Valentine day as well. The day before our picnic we attended Ashay’s marriage party. Although many of us felt hangover, we managed to wake early in the morning to catch our bus at the stop at the scheduled time. My bus was scheduled to meet me at 7:15 AM at Purano Baneswor; It was just 15 minutes walk from where I reside. I grabbed all the accessories I needed for a picnic, but forgot to take my sun glasses.

Our office bus arrived at my pick up place at around 7:45 AM. I was shocked to see only three people from our office in the bus, they were our coordinator Bikram, Rajesh and Rabin. Then we stopped at Mid Baneshwor to wait for some brothers and to buy some liquor: fuel to rock n’ roll. We picked Sushma Di from New Baneshwor and Awanish, Kishor, Ekta, Sudip and others from Koteshwor. Then we headed straight to our destination Lakhuri Bhanjhyang through Gwarko and Lubu.
On the way we found that one of our buses had reached our spot, but the catering were not found. Since, catering were supposed to serve us with morning tea and snacks. So, for a while we did a little joke in our bus if Kishor, after last night hangover, have called the catering and said not to come at spot or changed our spot.

The very hit song ‘Jaalma’ started with the line ‘Paari tyo Dhanda ma hera…..’ and everyone was refilled and jumped onto dance floor. Awanish came up with an idea to dance as a team of Male and Female.

Continuously making noise and joking, we reached our destination around 9 O’ clock. We met our friends, brothers and sisters who were in the first bus. Meanwhile, there was the call that our catering has finally arrived the spot and needed some help to carry the kitchenware for the picnic. In half an hour our catering managed to serve us with tea, egg, and jam pauroti. Empty stomach of everyone hurried to serve table to grab their snacks. During the tea time we heard beats of music coming from our speakers.

Then we started to dance on Awanish’s classical songs of Swor Smarat Narayan Gopal and others followed by some Bollywood item songs. Then we changed the playlist, the very hit song ‘Jaalma’ started with the line ‘Paari tyo Dhanda ma hera…..’ and everyone was refilled and jumped onto dance floor to dance to that song. It was played like 4-5 times continuously, for one to two time all had a roughly dance circling around and dancing. Then Awanish came up with an idea to dance as a team of Male and Female. As the day passed, our picnic was getting more exciting with dance, games and antaksiri. The sun was about to be at the dawn so, we had to hurry to leave the spot before it gets dark. We had our evening snacks as soon as possible and left the spot. On the bus we again played the song ‘Jaalma’ for many times and everyone in the bus were dancing even though there was a narrow space. Ekta was an awesome dancer, she danced on the item number ‘Chittiyaan Kalaiyaan’ in the bus. A day full of exciting moments was ended with the happiest memories in every one’s mind.

Buddha Raj Shrestha
After getting the mail for our picnic the first thing that came into my mind was my childhood days, when our teachers usually took us probably to “Tribhuvan Park” or the “Zoo”. I don’t think I’ve been to an official “PICNIC” since then. Well, the spot had already been decided by then and it was Lankuri Bhanjyang that we all had planned to spend our Saturday in. Starting at, I got to my station at Tripureshwor, about 7 : 45 AM, where I met Ashish, Pramesh and Roop. We had to wait for a while, but as we got into our bus I saw all the happy faces of my friends, feeling optimistic and waiting for a memorable day to come.

On our way, beautiful Nepali pop songs from the past were being played, thanks to the pen drive owner(I don’t know who’s was it), which we hadn’t listened to in a long time. The road to Lankuri Bhanjyang is not that good guys, and I believe those songs helped us distract from those bumpy roads. It took us about 1hr to reach there and the weather there was really chilly. Also, it was quite amazing to see that there were about fifteen different picnic spots on top of one hill and each of them were booked. Which led me to think, why was this place so famous for picnic spot? Obviously the scenes from the hills were pleasant to the eye, but still there had to be some other reasons to that which I didn’t know. Carrying on, after reaching the spot, we played our first team building activity in an indirect form. Our spot was way behind the bus stop and we had to carry all the catering necessities to the spot. It was really nice to see that everyone contributed in their own way.

we saw a family were performing dance within themselves and having a good time, at another spot, just next to us, which was actually really fun to watch in a certain extent, gave us the feeling of what a good picnic should be like

After having our breakfast, everybody were keeping themselves busy. Some were playing cricket (yes, on top of a hill, sounds funny though), some were playing football (hoping that the ball doesn’t land in the cooking area), some were playing badminton and some wandered around, exploring the new place and it seemed that everyone was enjoying in their own world. After a while, the music started playing on the speakers (as normally did on every other spot) and everybody danced to the songs, lead by Awanish. By, then most of the people had gone for sightseeing, I guess, because there were very few people dancing, but still it was quite fun though. Well, that continued for a while and we were all tired and hungry. After having our lunch at around 12, it seemed that there was no any scheduled program, so our trainee group decided to have our own sightseeing :D. Visiting areas around Lankuri Bhanjyang was more like a hike, because the roads were sloppy and muddy. While going around, we found a temple of Lord Shiva and there were people performing some Puja there and generously offered Prasad to us. We still had plans to visit other areas, but we were running late on time and decided to head back.

After heading back, we saw that everybody was ready for playing BINGO. It was organized by Bikram and Ekta and helped by a sweet girl, as the caller. I don’t remember who won which category, but by the end of the game, everybody felt they were close in winning and thought they missed by just 2/3 numbers call. Well, that was the beauty of BINGO :). This was soon followed by another team building activity in the form of antakchyari. We were equally divided into two teams and we enjoyed participating in it (who doesn’t!). That was our last activity and we soon got ready to have snacks during which we saw a family were performing dance within themselves and having a good time, at another spot, just next to us, which was actually really fun to watch in a certain extent, gave us the feeling of what a good picnic should be like. Nonetheless, it was around 5 pm by then and slowly the sun was starting to fade. It was a perfect time to say goodbye to Lankuri Bhanjyang to which we decided to capture some moments, and took some memorable group photos.

Well, that is it everyone! I just think, a bit more of the team building activities would have made everyone jell more, but still, a day well spent with fellow Deerwalkers and I hope everyone is more familiar with me than before, more close to me than before (certainly is the other way round 🙂 ).