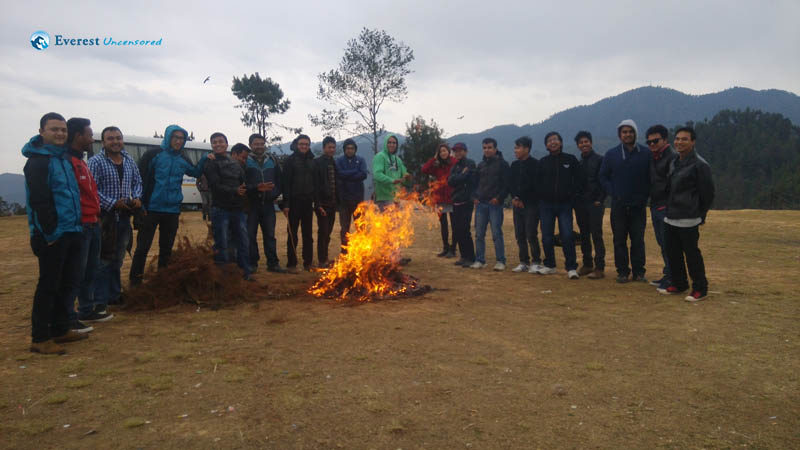 Divesh Upreti
The fated day, the squad B picnic day. As everyone else, I was quite excited.

Mostly because of all the gossip surrounding this event. I was looking forward to this day also because this was my first picnic as a deerwalker, and I had heard a lot about other squad picnics being a lot of fun with the team building exercises and whatnot.

When I woke up, I expected the day to be really cold and rainy. We left off from the Deerwalk premises as soon as morning struck, which seemed quite late because of all the clouds blocking the Sun. After most of us were in the premises, we loaded up the bus with some food, lots of beer and ourselves. We picked up the other attendees as we drove to the much debated destination, “Lakhuri Bhanjhyang”.

The ascent to the bhanjyang was much fun. Singing inside the bus, funny conversations among us troopers, and so much of hullabaloo.

The engineers successfully built a large fire which kept our spirits up despite the clouds looming overhead.

Upon reaching the destination, we saw that we were above the clouds, the scenes from the place was surreal, everyone was panorama-shooting everything they saw. But I can’t say the same about the place. People had sadly trashed the place with so much garbage, it was a sore sight. I was demented to think how the spot would be like after we’d left. But fortunately we had an okay trash collection technique, and we did not add to the uglification of the place.

Half the team left for collecting some firewood, the saving grace in that day. The engineers successfully built a large fire which kept our spirits up despite the clouds looming overhead. We had some breakfast when everyone was hungry. The catering people were so-so not at par with most of our expectations. We feasted on Eggs, Bread and Jam, soft drinks, beer and tea. Everyone had their own scene going on, feeling free of all the responsibilities that come with working at deerwalk. Some of us were introspecting, some were having beautiful discussions, some were getting a high off the office-funded booze. Most of us were loving the non-stop beer flow at the picnic.

After some time loitering all over the place, and some photos taken, the rain had started. Most of us wondered, why a bunch of engineers decided without any forethought on the weather to decide on the venue and date. There are weather applications in everyone’s palms, but then for me, my first office picnic had to be a rainy day, Yay. We all were tired to be resourceful and got the most out of the day, and camped inside the bus to play a few rounds of dumb charade, which sparked smiles in all of us.

The caterers were working hard on the meal and it was served under the rain. Again the meal was mediocre, not up to par yet again. And the rain drowned our spirits furthermore. The fire was still going on, and we decided to have food by the fire. During the meal, the rain got very heavy, and we ran for our lives towards the bus. We stayed in, and after a few hours, it was time to leave.

But because of the heavy rain, the bus could not carry us down without slipping. We all had to get down from the bus and walk for it. We called up for another form of transport and Rabin saved us that rainy day. The descent was muddy, slippery, Sushant would attest to that. He unfortunately slipped and was injured and that was seriously disheartening. We carried on for about an hour, nobody was keeping time at the point. The end of the day was poor and the picnic we had so eagerly waited for went poorly, to say the least.

The Hi-ace was warm and we were happy that the day ended and we were on our way home. Lakhuri Bhanjhyang is a beautiful place, anyone would love it up there. The day you decide to go there just make sure the weather is favorable. Because, when one hears picnic, one imagines: Sun, grass/sand, water, good food, and NOT Rain, Mud, Sprains and all else.

All that said, I’m still looking forward to the next picnic. 🙂

Saurav Dangol
After leaving Sifal at 8 AM, our journey began. Little did we know it would leave us with memories of an unprecedented event. Traversing through intermittent traffic, chattering about our excitements and after circling around the steep hills which made our bus swirl like a serpent we reached our destination, Lakhuri Bhanjhyang in about 45 awaited minutes, which had in store for us a panoramic view of the Kathmandu valley which we evoke it till today.

This mesmerizing view, I would say is the highlight of our most awaited picnic. Had it not been there, the picnic would have been hollow. After a long gaze of the valley we went looking for twigs, dry branches of trees in a nearby sparse forest to light a fire in the hopes of mitigating the effects of strong, chilling and teeth grinding wind. When we started our fire, hopes began to rise again along with the crackling of the fire; hope for an exciting and a memorable event. After being replenished by a rich breakfast we started enjoying ourselves. While some danced to the beat of music, some were enjoying the conversation while others were exploring the wilderness which in a way was bestowed upon us.

One could say our adventure was an amalgamation of picnic and hiking; a blend of joy and hardship, though the latter is negligible to be taken account of

After we had our scrumptious lunch made by the catering guys, it was like the weather was having mood swings, we were assured of it when it started raining. The fire which we started was in a risk, in our despair strong winds were blowing constantly. So we had to scurry our way into the bus looking for shelter from rain. Cold, shivering, we had a gloomy moment for a brief period inside the bus until we began to enjoy ourselves again. We created our own ambiance inside the bus, chatting, playing charades, laughing; we were highly elated.

We had our dinner sheltering from rain and wind in a tent built by our catering guys. After the dinner it was time for us to return. We hopped into the bus, but our driver said it was risky to go down the hill on the slippery road. So we decided to walk all the way down to the bottom of the hill where another transportation provided by our office would arrive. We were now treading on a slippery downhill taking precarious steps, avoiding sporadic pebbles and rocks, drenched in rain making our way downhill. Though it seemed we were having a hard time, but if we dissect the circumstances, it was an adventure in itself. After about three hours we reached our destination all tired and drenched but we were ecstatic when we saw our ride of which I thought was there to rescue us from our hardships but also to deprive us from our adventure.

In a nutshell, one could say our adventure was an amalgamation of picnic and hiking; a blend of joy and hardship, though the latter is negligible to be taken account of. In the end, we had a great time, but most importantly we felt accomplished.