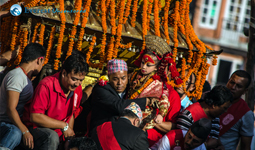 Photo Description:
This picture was taken on September 27, 2012, the first day of Indra Jatra at Indra Chowk when Kumari was about to be carried in her chariot.

Kumari literally means -Virgin in Sanskrit, Nepali and other local languages. She is regarded as living goddess and a source of supreme power. Kumaris are prepubescent girl selected from Sakya clan (Buddhist) family of Newari community and is worshiped during religious occasions. Throughout Nepal, there are several Kumaris and among them the Kumari of Kathmandu is the most famous. The Kumari of Kathmandu lives in the Kumari Ghar, a palace located at Kathmandu Durbar Square.

A rigorous process is followed in the selection of Kumari. The current Kumari, Matina Shakya, was selected in October 2008 at the age of four. It is believed that she is the incarnation of goddess Taleju (Durga).