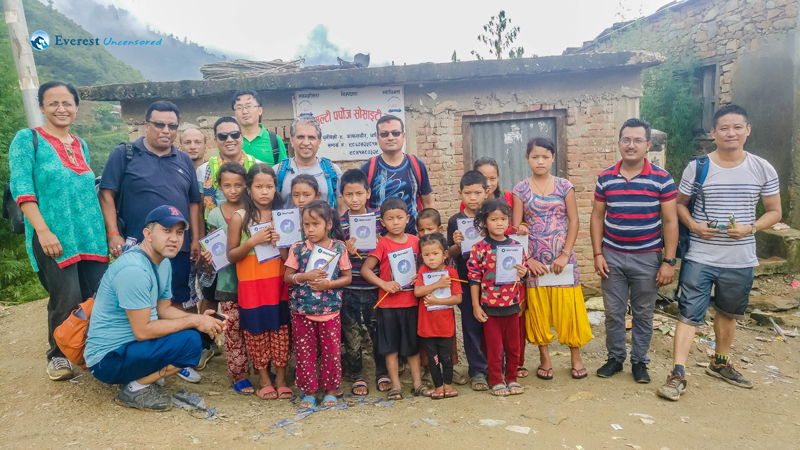 Bijaya Shrestha
Dhading District (धादिङ जिल्ला), a part of Province No. 3, is one of the seventy-seven districts of Nepal. Dhading Besi is the district headquarters and covers 1,926 square kilometers. Ganesh Himal is the predominant peak located within Dhading, but Manaslu is clearly visible from many of the places in the district. Dhading Besi is the most popular destination in the district as well as one of the most populated and is a major gateway for residents of the Kathmandu Valley. Prithvi Highway, which connects Kathmandu and Pokhara, runs parallel to the Trisuli River through the southern portion of the district. The district is bordered to the East by Kathmandu, Rasuwa, and Nuwakot, to the West by Gorkha, to the North by Rasuwa and Tibet, and to the South by Makawanpur and Chitwan. In the southern part of the district the people are primarily Brahman and Chhetri, while in the northern part Tamang and Gurung. Newars are the majority in the central two more-populated municipalities and eleven mostly rural municipalities.

we were confident that we would not get lost, as it was the childhood home of the Deerwalk Group chairperson, Dr. Rudra Raj Pandey, who was along with us.

Aiming at enjoying the panoramic beauty of the district, exploring possible business hubs and interacting with the local people, twelve hikers (ten from Deerwalk and two guests) were all set to walk from Khanikhola to Nagdhunga on August 19, 2018. The chosen trail passed through wards 8 and 9 of Dhunibesi Municipality of Dhading District. The trail was easy for us. Furthermore, we were confident that we would not get lost, as it was the childhood home of the Deerwalk Group chairperson, Dr. Rudra Raj Pandey, who was along with us. Early at 7:00 AM, most of the hikers gathered at Deerwalk Complex and began picking their trip partners on the way. We had a light breakfast at Khanikhola and looked at some of the beautiful houses where we could possibly extend the business domain of Deerwalk Group in near future. Most interestingly, we were caught by a follower (जजमान) of Dr. Pandey who offered us tea in a tea shop as a token of appreciation to a mentor (गुरु), coincidentally on a holy day for Hindus (जनैपूर्णिमा). Dr. Pandey remembered his childhood days when he used to visit the villagers and recite ritual chants at the family ritual functions of his follower (जजमान). The day was cloudy—no rain or sun. The weather was in our favor. The route was entirely uphill, but not tough. There were enough springs where hikers could show their stunts and rest for a while. Without difficulty, the hikers followed the route and enjoyed a late lunch served at Spider Resort which was along the route. The hike finished at 4:30 PM, after only around 6 hours, which is probably the shortest and earliest ended hike for Deerwalkers.

One of the major strengths that we realized on our hike was, the locals maintained the statement describing Nepal “Nepal is an agricultural country” alive. Lands were not barren, villagers cultivated green vegetables covering hectares of land. They have practiced it as their major occupation and sustained life by selling vegetables. They proved their hard work in the land of Dhunibesi. This is most probably why so many senior citizens in Nepal say, “माटोमा सुन फल्छ”. The second strengthwas the daily effort of Amrita whom we met on the hiking route and was introduced to us while offering sets of copies and pencils that we had taken along. She is a grade 10 student studying at Machindra Secondary School, which is located in the town along Prithivi Highway. According to her, she walks one hour downhill and more than one hour uphill just to go to school and to come back home—this is what she has been doing since the day she started school. She had, however, no difficulty walking more than two hours a day to continue as a grade 10 student. Her regular excitement and strength should be a good source of inspiration for other students as well.

Despite, these beautiful stories, one of the major problems that we found in the village was easy access to local alcohol (रक्सी). The father of one family was found to be completely drunk at midday. The smell of the waste products thrown out during the process of making local alcohol added further evidence. The second problem was the lack of computer education. Surprisingly, we learned that all the community schools in wards 8 and 9 of Dhunibesi municipality do not offer Computer Science at their school. In order to deal with both of these issues, I believe, the government must execute a plan and policies.