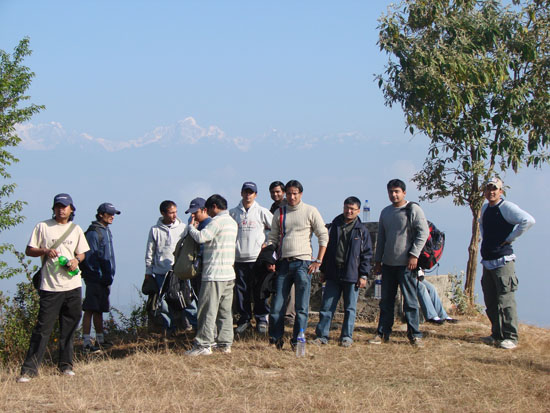 After failing to catch up with the previous hiking sessions due to various personal reasons, it had come to me that I’d go for this one come whatever may. It was still foggy and cold, when the bus picked up Chaman, Rajendra and myself at around 8 from Minbhawan,

We had our breakfast at Suryabinayak and moved on. We reached Kabhreybhanjyang at around 9, and after taking few notes and instructions from the locales, we kicked off our journey straightaway.

The first station was Faskot, some 15 minutes walk from Kabhrebhanjyang. We climbed up through a thin jungle with pine woods and a small hill, to Faskot. On the way to Faskot, when Chaman mentioned he was getting exhausted, I was thinking to myself what on earth would be waiting for him for the rest of the day. We were four, the first timers.

We halted at Faskot for some time and then restarted the move to Fulbari. We walked for more than half an hour, up and down the hills and terrain and gritty roads. I was bit amazed to see huge vehicles passing through the jungle at first, but when Vishnu told that the road also connects Kavre to some other districts, I was compelled to think about how the transportation system is still so much underdone and unprocessed in the nation.

The walk to Fulbari had surely made everyone exhausted and a bit hungry. Vishnu ordered for some beverages and foods from a local shop. Samir was still busy capturing the scenic beauty of the hills onto his electronic device. Amazingly, he also managed a get a shot of an elderly man, drooping of age, and the folds on his forehead telling a saga. I believe Samir’s pictures will certainly cause some noise.

The next station was Dapcha, more than an hour walk from Fulbari. I realized that the light snacks have really worked as energizer as everyone looked so afresh and keen to start over again. From there, we dropped down to a local school and distributed stationeries to the students there. I believe, D2’s this inspiring and initiative step to help the needy will surely leave a touch in all of us. We also handed over the remaining items to the school.

We then, climbed up a couple of more hills before we reached the hill of Namo Buddha. Everyone was astonished to see the titanic monastery standing tall in the middle of the jungle. Legends say the Stupa was erected on the top of the grave of prince Mahasatwa who once offered himself to a hungry mother tigress to feed its starving cubs. The legendary is depicted in a stone slab placed inside a small temple built right next to the Stupa. From the top, everyone witnessed the beautiful vista of the surrounding areas.

We had to walk few more hills up and down to finally step on to Dapcha. From Dapcha, we walked down the hill. The dusk was taking over the day. It was late afternoon and everyone looked bit lethargic. Chaman, Manoj and I managed to make it first to Bhakundebesi, where our van was eagerly waiting for all of us. The team showed up after a while, all looking pooped and sluggish.

We rested at a local restaurant for a while, had our dinner with candles light and made our way back to home, with a whole new lot of experiences and discovery. Vishnu’s line, Ram’s “2 inches”, Kapil’s humorous remarks, Samir’s photogenic poses and shots and his singing lure, Leeja’s hardship and her attempt to overcome the challenge were really entertaining throughout the hike, which invites us to repeat the voyage to yet another direction with unfold truth and gem, once again!!

01 All squeezin to start a brand new journey

03 Walkin’ through the Golden Jubilee Park of Nepal-Japan Friendship

04 Standing on the land of temples

05 Life is full of up and downs

07 Walkin’ on the edges was surely worthwhile

10 A typical rural area in Nepal

11 We’re not exhausted, its just a breaktime!

13 A panorama view from the top of Faskot

14 Entering into the lines of Fulbari

18 Brother, Brother, where is the peace!

19 The coffee interval at Fulbari

22 Yet another tombstone (v)

23 Everybody loves to be gifted, how about gifting others..

24 Giftin is about giving happiness !

27 The best trail of the journey

28 Living under the shadow of white

29 A scenery from under the leaf

31 A tribute to the Prince MahaSatwa

32 Another Stupa from Namobuddha

33 Goods deeds are always remembered! A lesson from Prince Mahasatwa

35 Blessed for the life time!

40 Standing tall in the middle of the jungle

41 A fight between urban and suburb

42 Tangerine, all the way from Dapcha

44 Guarded by the hills

45 A bit of leisure, time for munching and crunching

46 Ram searching for Sita in the Mustardbari..

48 Who cares when you are not able to move an inch!

49 Guess what Prabin is after!

52 Marchin towards the destination

55 The last light of the journey

0 thoughts on “Hiking from Kavre Bhanjyang to Namo Buddha”