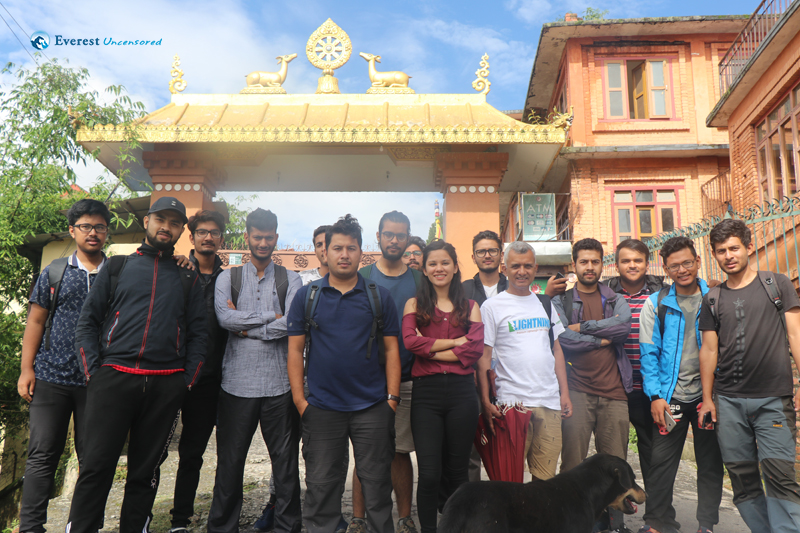 Pretending to start the hike at 6:45 AM ,rushing and hushing around made the delay of about one and half hour. Piling everybody at Deerwalk complex and making some conditional plans we decided to start our journey.

Afterwards we headed towards kapan ghumba .Chriping around and rocking the bus we finally reach the place where journey should had to be started .And there we go creating lots of memory and making fun around, tightening the friendship and bond, we forgot that we were in hiking mood .Getting in lots of trouble ,pain,we still continue our hike giving damn to the things happening to us , a cooperative leadership and
good company of our brothers, sisters and friends made our day majestic. Then, we took a break and stopped our hikingfor a while to have something for our stomach “our guts were empty”. So, we decided to have something and grab some strength .While having breakfast one of our brothers taught us a breakfast hack and we didn’t need to peel shell and less effort was required.we can have taking in mind peeling off.

It was one of the funniest moments on day.Now after grabing strength we moved on and after couple of hours we reached “Tarebhir” from “Fulbari Ghumba”.So we decided to have cucumber which was plan of our dearest sir Mr.Surendra sir.Having cucumber with mixed pickle was so delighting .It brought so pleasent taste to my tongue and I was so thankful to one who gave such amazing recipe.

So, after a while we reached Sundarijal at around 5 pm.And we were exhausted so, decided to have a cold drink each. So, it was a time to return and we returned by rocking bus by playing music and dancing at around 6 pm and we had our thakali dinner at “kasthamandap thakali” at chuchepati. Returning back with lots of hunger. I don’t know who ate the most but a can definetely bet that i had happiest dinner of all time. So after having everything it was time to say goodbye to everybody. So we moved own way remebering ours mjestic movements that we spend couple of ours
hours ago.

DWIT Hiking club sorted out multi day climb to Sundarijal through Kapan Gumba, Gokarna and Tare Vir. The gathering of 16 climbers left Deerwalk Complex at 7:15 am and begun the climb at around 8 am from Kapan Gumba following a hour of climb everybody had their breakfast and prepared for the stroll towards Tare Vir. the excellence of the green thick woods enamoring to everybody. Following 2 long periods of climb, everybody making the most of their snacks at Tare Vir and proceeded with the stroll to Sundarijal.

After the constant climb, everybody achieved Sundarijal at around 4 PM lastly ate at Chuchyepati , while in transit to school.