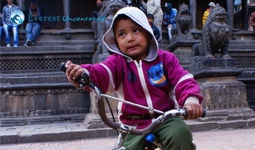 523. Just so rightly set to make people fall in love with it
Photo By: Prafulla Pokharel
Posted Date: 18th December, 2012

Photo Description:
The photo was taken a year back at the Patan Durbar Square. People irrespective of age, gender or nationality gather for a chit chat with friends and family while enjoying the historic atmosphere of the square. Patan, officially known as Lalitpur Sub-Metropolitan City, is one of the major cities of Nepal and is located in the south-central part of Kathmandu Valley. Patan is also known as Manigal. It is very famous for its rich cultural heritage, with its tradition of arts and crafts being the most popular.

The picture above is of a kid who in the afterhours is relaxing riding his bicycle. He just seems to be enjoying being a kid in the midst of the great Patan Durbar Square.

0 thoughts on “Just so rightly set to make people fall in love with it.”