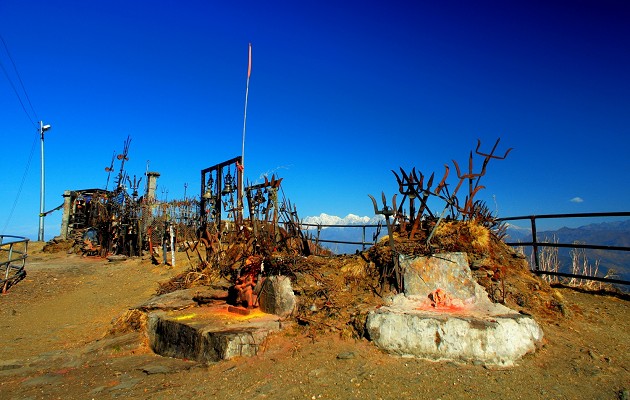 Kalinchowk is a little known and rarely visited tourist destination. This is at the altitude of 3790m which is the highest around the vicinity. From this place one can get a wonderful panoramic view of Annapurna, Lamjung, Manaslu, Ganesh Himal, Shisha Panga, Langtang, Dorjee Lakpa, Jugal Himal, Amabamori, Gauri Shanker, and Namburi Himal. There is also a prominent temple of the Hindus called the Kalinchowk Bhagawati (Kali) temple.

Two natural springs originate from this area which are called Sundhara and Tama which are the main source of the very big two rivers the Sunkoshi and Tama Koshi rivers. From Kalinchowk one could get a good view of Kathmandu at night. The main flowers of Nepal Rhododendron (Laligurans) and the national bird Pheasant (Danfe) can also be seen in this area. While descending to Suspa you could get to see a very rare community in Nepal called “The Thami.” [wikimapia.org]

It was saturday but not a regular saturday morning as we were up to an unprecedented hike. I say unprecedented because no D2 hikes have ever reached an altitude we were about to scale. Well, not at least those that have been categorized as “hikes”.

Camera, check. Food, water check. Hikers, check, we were ready to go. We set off at 7, stopped by several ATM machines to withdraw some cash, but none were working, Bhatbhateni, Durbamarg, Putalisadak, even Banepa. We reached Sharmila’s hotel at Zero Kilo at about 9 am and had our breakfast; puri, tarkari, and tea. Everyone liked those tea cups. After reaching Khadichaur, it was all uphill ride. We were very excited with the glimpse of a mountain and stopped by to take pictures of lali gurans. We passed through another area called Mude, “the place to buy potatoes”. A little further, we stopped to capture picture of mountains. From there, it was a downhill ride. At about 12, we reached makaibari, meaning Corn Field. This was the place we were supposed to start hiking. We had noodles and omlette. Anticipating some darkness before we reached our destination, we bought a torch light to add up to the two that we already had. The shopkeeper told us there were a number of hotels in Kuri, where we intended to shelter and since it was off-season, accommodation would not be a problem. He even called one of the hotels to tell them to expect visitors but hit a wrong number. Well, we didn’t really care. At 1:15, we were ready to walk !!

It was a steep climb to begin with and I was sure there was more to follow. About 40 minutes after the start, we reached a place called Deurali where a few local damsels teased us through. A little later, we stopped to eat. Digestive biscuits, real juice, tang, enough to fuel us. Another half hour climb got us to a place with very cold running water. We cleaned up, filled water bottles and moved on. From there, it was steep climb and more of it. Every time we reached some place that seemed like the top of a hill, we would ramble a minute or two only to see a tougher climb awaiting. Another known stop was a place called “Gaihri” with merely two houses, a tot and few chickens. Gairhi was the last known stop before we reached “Kuri”. We were divided into several groups as we walked by and it was me, Saroj and Amit taking the lead. It was 6 and beginning to get dark when we decided to hit the brakes and wait for others to arrive.

It was very cold, we had little water and nothing to eat. Worse, we had to wait in the dark. We collected some wood, dry leaves and made fire to keep us warm. We waited, on and on but could see no signs of our friends; shouldn’t have taken this long! After about half an hour, we heard someone yell our names, they were telling us not to walk ahead. A lot later, all the hikers showed up in a place. Later it turned out that Siddhi was not feeling much comfortable. He was having trouble walking and feeling weak and a little dizzy. We sat by the fire for some more time and feeling a little energized, started to walk at 7. It was cold and totally dark; we were walking with the torch lights on. There was a positive side to it though; we saw more stars in the sky than we had ever seen. There were billions of stars, seemed like they had been squeezed in there.

The situation with Siddhi was getting worse and we stopped at one more place before we decided to pull over. We were unfamiliar with the place, we never knew where Kuri was located, didn’t know how long we would have to walk before we reached Kuri and it was dark and cold. It would definitely not be wise to move ahead with the situation in hand. So we decided that half of us would go ahead in search of Kuri and get back on failure to find anything useful after an hour’s exploration. Six men marched forward for the mission, Saroj, Amit, Dhilung, Rajendra, Rameshwor and Dinesh. And well, how would they let us know if they did find Kuri, if ever? Some of them would walk back and then take the seven of us there. Ya sure, dream on. With all of us so hungry, tired, say wretched, no one would have done it for money! We checked if we could use our phones but NTC network was out of reach. Fortunately, Dhilung and Rameshwor had Mero Mobile SIM cards and the two phones worked. A phone was given to each of the groups and the “search-team” set off in search of the “phantom” Kuri in the wilderness, with a promise to call back upon success. We stayed behind, collected wood and made fire. It was 8:30 in the night as they left.

I had totally lost hope of getting any food to eat and a place to stay as we were talking about preparing ourselves for a stay in the jungle through the night. There was fire to keep us warm and I was wishing for some potatoes to roast and eat. Every little sound we heard and every movement we felt around ran a chill down our spine. Sanjeet hurled a stone in the dark when we felt something moving. Then, out of the blue, the phone I had in my pocket started to beep and buzz. It was Dhilung, telling us they had located Kuri, found a place to stay and cooked food to eat. He gave us directions, ten minutes uphill, get to an iron gate, another fifteen minutes downhill and there you are, Kuri. We were so glad that things were going to be all right and at the same time thankful Mero Mobile Network, we were planning on getting an extra Mero Mobile SIM card. It was 9, we were energized and ready to walk again. Siddhi seemed to have conjured up magical strength as we climbed up.

We reached the gate and went downhill. Then it seemed that we had reached a somewhat plain area. We couldn’t tell exactly with the lights we had but it seemed like an open space. This should have been it, Kuri, there should have been houses, hotels and no way the place should have been pitch-dark. Did we take a wrong turn? Or was the whole Kuri thing a hoax? We got desperate, freaked, tried to call Dhilung only to realize that now Mero Mobile signals too were out of reach. Then suddenly we saw a ray of hope. Actually, we saw two full poles. It seemed they were electric poles and upon closer inspection, we saw a transformer as well. We were hopeful of civilization nearby, but there had to be some light if people were living in there. Sanjeet felt he saw intermittent light in that area and we had only walked ten meters that we saw a house. We screamed out names and the “search” guys came out. Finally, something to cherish.

We had thought all the people in Kuri were asleep, hence the lights turned off. Turns out, just one house was inhabited, the one we got sheltered to. All the Kuri people were away during the off-season. Lucky us, we had a place to stay! A lady brought us Tongba “Kodo beer”, cooked us dinner along with local chicken. We ate as we discussed the next day’s plans. They didn’t have the coziest of beds but I would have traded it for anything for a night’s sleep. Too tired to take it anymore, we just crashed in into our beds.

Such adventure we had on Day 1, it was going to be a tough act to follow. We woke up early on Day 2 and set off to climb the scary looking hill to get to Kalinchowk Bhagwati. After about an hour’s climb, we reached the top, 3790 meters! We could see the mountains right before our eyes, bottom-up, nothing between us. And Kalinchowk Bhagwati was there too. The wind was cold and blowing real hard. At 9, we began our descent. We ate, stayed out in the sun, took pictures with the lady and left Kuri at 11. Nothing eventful happened on our way down, besides realizing that we had walked through very steep path for very long the previous day. At 1:15, we reached the same place with cold running water, washed, drank, filled bottles. A young girl came to us and began enquiring about a guy who had taken her picture the previous day. Turned out, it was Dhilung. He took more pictures of her. She said she wanted to keep her pictures. Dhilung told her she couldn’t as she would have to keep the camera itself. She retorted that she was even ready to keep Dhilung himself. We made sure that didn’t happen. At 3, we got back to Deurali and walked towards Charikot where D2 van was awaiting us. We decided to pay a visit to the very much revered “Dolakha Bhimsen” temple. It was 6 when we left Dolakha for Kathmandu.

The hiking was a rigorous one. We had to deal with some very difficult climbing, reached great altitude and even had an account of getting lost. At some point, some of us might have wished we had never come. But at the end of the day, we realized that we ended up with better experiences to share, better stories to tell. I’m glad I made this trip.

171 thoughts on “Hiking from Makaibari to Kalinchowk”