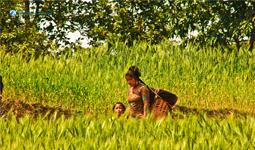 Photo Description:
The picture above was taken in T-gaun. It is a picture of a mother going about her work as her daughter toils along. There is a sense of the two lost in their own world as the picture captures the rapport in between. The primary focus are the two females in the frame as they exhibit the strongest of bonds there is, between a mother and her daughter. The scenery around, as beautiful as it is, becomes secondary to it. A mother’s love for her child is like nothing else in the world. It knows no law, no pity and it dares all that come against. Things just get reduced to the essentials. Bless their hearts as they symbolize all that is human, even though unknowingly.