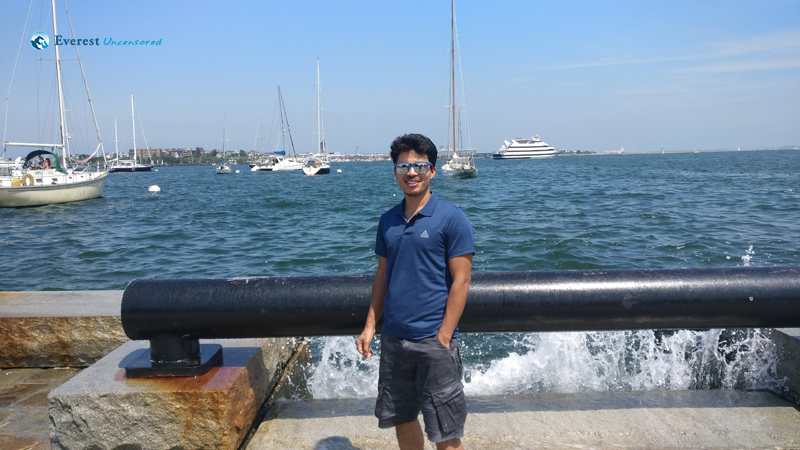 My official visit to US started from July 1, I was fully prepared for the trip and had learned about the flights, transits, United States cultures, dos & don’ts. Besides usual things, funny part about my trip preparation was that I used to watch the flight simulator videos on Youtube even though I was not going to operate the aircraft myself 😛 . I had installed Hamad International Airport, Boston Logan International Airport and JFK Airport’s android apps and explored all the airport concourses/terminals/gates and its architectural structure. Those apps were really helpful.
It was going to be my first ever overseas, solo trip, so even with a lot of preparation my excitement was getting ruined by anxiety, at least the day before departure.

However, on June 31, around 8:40 PM I boarded on the Qatar Airways flight QR 651 at Tribhuvan International Airport and headed towards HIA Doha. After 4 hours, I reached HMI Doha and after getting transit visa, Hotel staff took me to RI Rihana hotel since I had to stay there for almost 8 hours to catch next connecting flight.
Next morning, again I got boarded on the same airline’s flight QR 743, bigger than earlier and headed towards the final destination, BOSTON.
After reaching Boston, I took a cab to my home for the next few weeks, “The Extended Stay America” where Prakash was at the gate to receive me.

While being in the US, I discovered a new way of life, a new city and culture and I realized how important is to travel and I have proposed to keep traveling as far as possible.
I stayed in US for a month and I tried to visit the biggest attractions of US. Good thing it was summer in the Northern hemisphere, we explored a lot of places, I fell in love with the beaches, with the highest buildings, clean roads, smart traffic management systems, sub-way train systems and the shopping systems.

First weekend, I went to the new Hampton beach with Sushant dai. It was my first beach experience and was very exciting. We then returned from there and headed to Boston Down Town to watch Freedom day’s fireworks. That was amazing.

Second weekend, went to Nanytaski beach and had good time there.

Third weekend, It was the long awaited weekend and finally departed for Las Vegas at 11:45PM from Boston Airport. Actually it was scheduled for 8:30 but got delayed due to “WeatherOutOfBoundException”. In the Las Vegas, we observed the Fountains of Bellagio which seemed like Iconic fountains featuring dramatic aquatic shows choreographed with music & lights. We also saw The Volcano show at The Mirage which was like igniting the Las Vegas Strip by combining fire with music. Overall, worth watching these things. We also visited Red Rock which gives the feeling of Hills of Nepal.

Fourth weekend, I departed early in the morning from Go Bus Station Alewife to New York. Where I met the former deerwalker and a friend, Parmeshwor, and in the new York, visited Coney Island, Times Square, Brooklyn bridge and One world observatory tower.

Thanks to deerwalk for sponsoring my visit and thanks to all who made my stay wonderful and comfortable. My special thanks to Rudra dai and Muna Bhauju for hosting such a wonderful lunch and for the new learning opportunity.