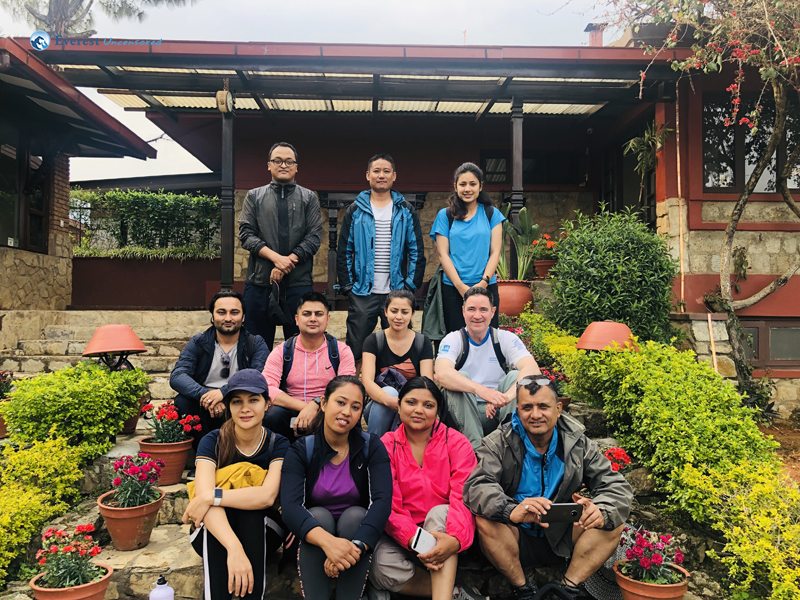 Pratik Joshi
The plan was set, and the route was decided. The office van moved from Deerwalk premises at exactly 7 AM. Half of the hikers arrived at DWS premises and the rest were to be picked up on the way to Taudaha. The plan was to hike from Taudaha to Champadevi via Bosan. It was very interesting hiking because of the company. I was quite surprised to see our American guest Michael Mussi speaking fluent Nepali. It was interesting to see him embrace the Nepali language and culture. He enjoyed the “Lapsi Candy” that Nizu had bought from a store.

We reached a few hundred meters past Himal Cement Factory to a place near Taudaha called “Bosan” (the name resembles a South Korean City named “Busan”) and, as usual, Surendra Dai led the way. The last time I hiked to Champadevi was way back in 2009. So, I could see a lot has changed since then and even the way to Champadevi seemed quite “easy” with stones laid on the way. The last time we were there we had to ask the way to Champadevi.

Hiking started at around 8:00 AM and we walked through a rugged road to get to Champadevi Pau (foot of the Goddess). On the way to the temple, we made frequent stops because of the elevation. The Sun had already gone up and had started to suck the energy out from us but the beautiful trees around, and high hills before us were so majestic that it proved as a painkiller for our straining legs. We rested as we climbed up the hill and on the top of Bhanjyang Hill. Such was the location that if we headed left we’d reach Hattiban Resort and if we went right we’d reach atop the Champadevi hill. After walking for nearly 2 hours we had just reached the bhanjyang. When Surendra Dai pointed towards ChampaDevi hill people started panicking as they felt that they might not be able to walk all the way up the hill and then back to Hattiban Gumba. It was a steep trail with a difficult path, and everyone was finding it difficult to conquer the hill at a single go. So, Jeevan proposed a different route, and we had to vote. By a very small margin, it was decided that we’d hike around Bhanjyang, via a trail not well-trodden, to Hattiban Resort.

While hiking through Bhanjyang it started raining heavily. We had to take shelter underneath the trees. The incessant rain made it quite difficult to hike through Bhanjyang. However, we had brought raincoats and umbrellas, so we decided to continue our hike. We hiked around Bhanjyang and at around 1 PM we reached Hattiban Resort for our lunch. On our way back we made a stop at Taudaha. Since Sangita was a local there she informed that we had to pay the entry fee which was NPR 20 for Nepali citizens. Luckily there were not many visitors in the lake so even the fish in the lake were swimming peacefully. We bought lots of Nutella and fish food and started feeding the fish. It took us quite some time to cajole the big fish to make a splash for the food. In the end, we bought some 12 packets of Nutella and sprinkled the food in the lake at a single go to see all the fish swarming in for the food.

That marked the end of our hike and we got in the van to return home, tired but full of memories.